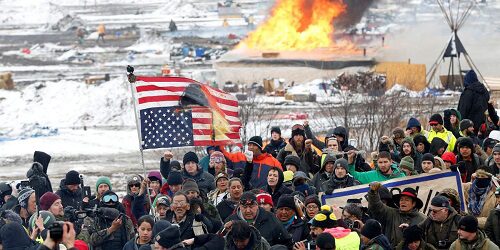 Credit: Terray Sylvester/Reuters.
Opponents of the Dakota Access oil pipeline march out of their main camp near Cannon Ball, North Dakota, on 22 February 2017.

US pipeline company Energy Transfer has taken the rare step of invoking force majeure—normally used in times of war or natural disaster—to prevent oil firms from walking away from a proposed expansion of the controversial Dakota Access pipeline (DAPL), according to two sources familiar with the matter.

Energy Transfer wants to nearly double the size of the line, and some companies that signed up say it is no longer necessary because of the sharp fall in US oil production after the coronavirus pandemic. North Dakota is one of the costliest spots in the United States to produce crude, and its output has dropped by about one-third from last year, more than most other oil-producing states.

DAPL is the largest pipeline running out of North Dakota’s Bakken shale basin. It has capacity to ship 570,000 B/D of crude to its endpoint in Illinois. Users say an expansion to 1.1 million B/D is unlikely to be filled because the state’s production is not expected to rebound soon.

“Honestly, DAPL is not needed,” said one customer who committed to space on the expanded line, speaking on condition of anonymity. “They’re trying to build a house that all these people signed up for. Even if there’s no longer a need for the house, you can’t really walk away from it. Would I like to get out? Yes, for sure.”

Energy Transfer, however, has invoked force majeure because it could not get the permits by a certain date, according to one shipper on the line and another familiar with the declaration. That buys the company more time to get regulatory approvals and prevents customers from walking away from their commitments.

The company declined to comment on the force majeure. Energy Transfer spokeswoman Lisa Coleman reiterated previous company statements that it has received enough interest to increase the pipeline’s capacity.

Pipelines are generally built after companies find customers willing to commit to shipping oil. That helps pipeline builders to line up financing for such projects, which take years to complete. Contracts to use future pipeline space usually allow customers to walk away from those agreements when substantial delays occur.