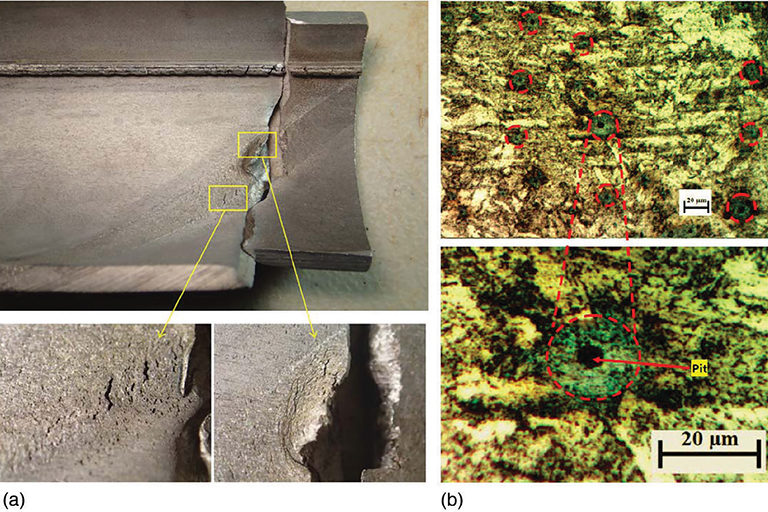 Fig. 1—(a) An image of coiled tubing string failure showing transverse cracking and pitting corrosion near the bias weld. (b) An image of bias weld material showing evidence of microbial influenced corrosion.

Premature coiled tubing (CT) failures have occurred in the United States, in areas such as the Eagle Ford and Haynesville formations, and the Permian Basin. In Canada, these failures once were not considered as prevalent. However, a presentation at the 2015 SPE/ICoTA conference in The Woodlands, Texas, changed that perception. A paper presented there detailed how a major Canadian CT service provider experienced a series of CT string failures while performing bridge plug millout operations in the Montney formation in northeastern British Columbia (Edillon et al., 2015).

With each trip in or out of the wellbore, CT strings incur fatigue that can be estimated using simulation software based on the CT outside diameter (OD), material grade, and operating conditions. CT strings can fail for a variety of reasons, including external mechanical damage, corrosion, and excessive diametrical growth. Premature failure results not only in operational delays and the associated costs, but critical safety risks for on-site personnel.

For these reasons, a study was undertaken to determine the root cause of the CT string failures in the Montney. The results showed that microbial influenced corrosion (MIC) was a contributing factor. This led the CT service provider to instigate laboratory and field studies to create a biocide treatment program. The program has successfully mitigated further CT string failures in the Montney and has now been applied to CT programs in the Eagle Ford formation.

Seven failures of 60.3-mm (2.375-in.) CT strings supplied by multiple manufacturers were experienced over 2½ months. The strings failed in the range of 18% to 49% fatigue—well below their predicted 80% fatigue life. Preliminary analysis of the failure points revealed pinholes and internal corrosion in the base material and at the bias weld. The filler material used in bias welds has different mechanical properties than the base pipe material, making it weaker and more fatigue-prone.

To determine the failure mechanism, CT strings from four of the seven units were further analyzed by the manufacturers. In all four cases, internal corrosion pitting was observed. Comprehensive analysis on one string, including scanning electron microscopy, energy-dispersive X-ray spectroscopy, and metallography, was performed by the manufacturer and the University of Calgary. The analysis revealed that failure occurred at the bias weld and indicated microcorrosion pitting and transverse cracking in the weld filler material (Fig. 1 above). The corrosion morphology (rounded shape with light green corrosion debris) and the presence of sulfur in the corrosion product provided indirect evidence of MIC.

CT fluid samples were analyzed for overall microbial population, using the OSP LifeCheck ATP Test Kit, which quantifies ATP (adenosine triphosphate), the energy molecule of the cell. Bacterial counts (in microbial equivalent [ME]) can then be calculated from the ATP level (pg mass), in relation to a standard, through ATP’s interaction with firefly luciferase enzyme, which produces light and enables detection with a luminometer. The analysis indicated extremely high concentrations of bacteria in the source water (>106/ml).

The presence of both sulfate-reducing bacteria (SRB) and acid-producing bacteria was indicated in the fluid and on the solid metal using LifeCheck SRB and PRD (phenol red dextrose) kits, respectively. These bacterial metabolic subtypes are known to be related to MIC.

MIC is caused by the formation of biofilms that result in localized corrosion in the form of very small pits, which lead to cracks and eventual pipe failure. The base fluid used for CT operations is often produced water recycled multiple times from stimulation operations. This fluid provides an ideal environment for bacterial growth because it contains hydrocarbon and energy sources (polymers and surfactants), is in the temperature range of 15°C–35°C (60°F–95°F), and is stagnant when stored in tanks.

Because the CT string and fluid analysis indicated MIC as the root cause, laboratory and field studies were used to evaluate available biocides to create an optimized treatment program. Multiple field-water samples were subjected to biocide kill and loading studies to determine efficacy and optimal concentrations.

Four biocides were evaluated: glutaraldehyde, 2,2-dibromo-3-nitrilopropionamide (DBNPA), tetrakis(hydroxymethyl) phosphonium sulfate (THPS), and OSP 2K7 biocide. Because each compound has a different mode of action, biocides were tested at the same concentration. Once comparative efficacy was evaluated, the optimal treatment level was determined.

The laboratory analysis showed that while all biocides were initially effective at reducing bacterial levels, the glutaraldehyde and THPS effects were short-lived with levels rebounding after 1 day. The 2K7 and DBNPA biocides were further evaluated over a range of ppm values. Even at the highest concentration tested, the DBNPA showed bacterial population recovery at 2 weeks, and with lower concentrations, rebounding occurred in less than 1 week.

The 2K7 biocide was effective at 100 ppm for 8 days and when used at >200 ppm reduced bacterial levels for 2 weeks (Fig. 2). 2K7 biocide works by disrupting the activity of bacterial membrane proteins, causing cellular collapse. Unlike other biocides, which can react with friction reducers and negate the effect of both, 2K7 is nonionic and does not react with other fluid additives.

Field studies were performed to confirm the laboratory results and establish the treatment program, as well as the bacterial contribution from source fluid vs. wellbore flowback. Field studies conducted on three separate well pads showed that one 2K7 Water Soluble Pak (WSP) per 10 m3 (63 bbl) of surface water effectively reduced bacterial levels from >106/ml to <104/ml, with agitation of the fluid reducing the reaction time. This fluid was then used for CT bridge plug milling operations and bacteria levels were monitored at various fluid locations in the closed loop throughout the operations.

Evaluation of wellbore flowback indicated consistently lower bacterial concentrations than the injected surface water. Despite this, bacteria levels at the surface rebounded. Therefore, it was concluded that the observed increase in surface bacteria was caused by the population rebounding while sitting in the surface tanks.

The rebound effect resulted from the CT fluid for the mill-out operations being reused for each successive pad well. As flowback water was introduced into the surface tanks, so were the additives (polymers, surfactants) from stimulation operations that, along with dissolved formation nutrients (sulfates, nitrates, phosphates) and increased temperatures, provided an ideal environment for bacterial regrowth.

The ability to identify the source of bacterial population rebound in real time, using the LifeCheck ATP Test Kit, enabled implementation of lower, maintenance treatments of the surface water with 2K7 biocide (one WSP per 40 m3–100 m3 of fluid every 12–24 hr). In addition, prestorage purging of the CT unit with nitrogen, 2K7 biocide, and corrosion inhibitors has been implemented as the standard operating procedure by the CT service company.

The complete paper presents the results of evaluation of laboratory and demonstration trials of HDPE liner to mitigate premature failures and prolong the run life of production tubing.