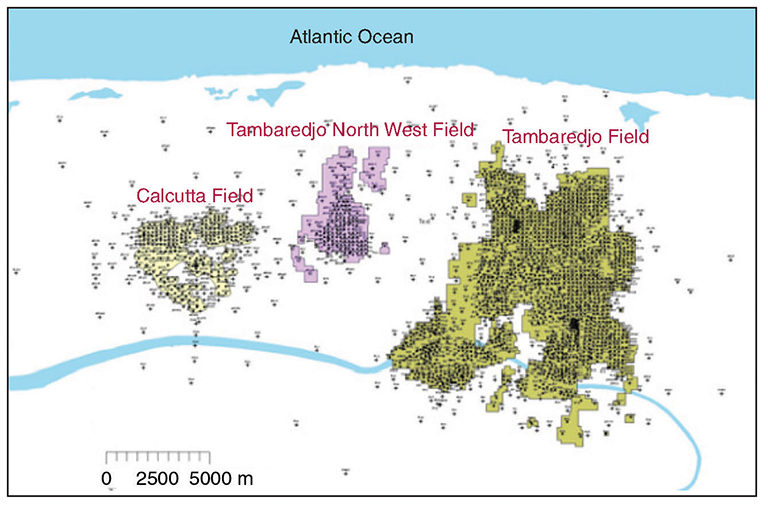 In the 30 years of operations on Suriname’s Tambaredjo field, the prime mechanism for lifting the 15.6 °API crude to surface has been that of progressing cavity pumps (PCPs). In the period from 2008 to 2012, an annual average of 580 downhole failures occurred, 54% of which were caused by tubing leaks. In an effort to reduce these tubing failures, a pilot program was commenced to install rod guides in wells with the highest failure rate and to install a 25-ft sucker rod directly above the pump.

Currently, Staatsolie Maatschappij Suriname produces from the Tambaredjo, Calcutta, and Tambaredjo Northwest fields, as illustrated in Fig. 1 above. These oil fields are located in a marshy area on the coastal plain of Suriname approximately 55 km west of Paramaribo.

The crude oil contains low sulfur content (0.65 wt%) and 1 wt% asphaltene and has an average viscosity of 500 cp at reservoir conditions. The water/oil ratio is 7 and the gas/oil ratio is less than 50 scf/bbl as of December 2013. The average daily production from these fields reached 16,700 BOPD from 1,549 active producing wells completed in shallow unconsolidated-sand reservoirs with depths ranging from 700 to 1,500 ft. The Tambaredjo oil field is the oldest and largest of these fields, with 1,130 active producers contributing two-thirds of the overall production.

This article, written by JPT Technology Editor Chris Carpenter, contains highlights of paper SPE 169978, “Case Study for Reducing Tubing Failures in Suriname’s Tambaredjo Field,” by D. Nurmohamed, SPE, H. Chin A Lien, SPE, and S. Kisoensingh, SPE, Staatsolie Maatschappij Suriname, prepared for the 2014 SPE Trinidad and Tobago Energy Resources Conference, Port of Spain, Trinidad and Tobago, 9–11 June. The paper has not been peer reviewed.
...
This article is reserved for SPE members and JPT subscribers.
If you would like to continue reading,
please Sign In, JOIN SPE or Subscribe to JPT