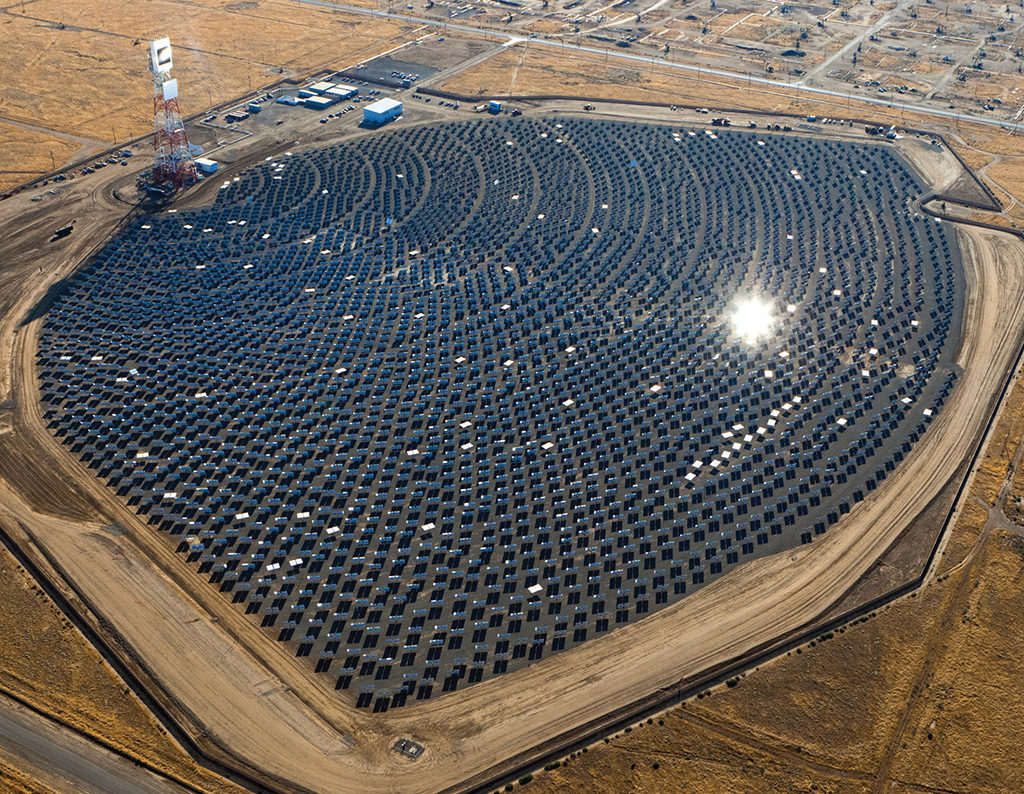 Source: Bright Source.
Built by Bright Source and operated by Chevron, this solar-to-steam facility in Coalinga, California was used for enhanced oil recovery from 2011-2014. With today’s solar prices plummeting, future projects may have stronger business models.

Could it be that the upstream industry has an unlikely ally in renewable energy? The two sectors are often framed as being at odds—one is supposed to eventually replace the other, after all. But in the meantime, the falling price of renewable technologies has opened the door for oil and gas companies to reduce the cost of electrifying their fields, according to one US energy expert.

“In many locations, solar and wind are now cost-competitive with other forms of electricity generation, so it just makes economic sense to be incorporating them into your industrial operations.” said Jill Engel-Cox, the deputy director of the US Joint Institute for Strategic Energy Analysis (JISEA).

Founded by five universities and the US Department of Energy’s National Renewable Energy Laboratory, JISEA is tasked with researching transdisciplinary global energy issues, including how to exploit synergies between renewables and hydrocarbons.

The bad news for the champions of this concept is that there is little momentum within the industry to implement such integration. The good news is that many of the early failures were attributed to the cost of renewables; a factor that is quickly fading away.

Bloomberg data published in January showed that the cost of solar power has dropped by 62% since 2009, making new installations more affordable than coal power in several countries. The report also projected that solar power could become cheaper than coal on a global basis by 2025. In the US, wind power generation is on a similar trajectory, having seen installation prices drop by 66% since 2010, according to the American Wind Energy Association.

Several industry majors have attempted to fit renewable energy into their portfolios, but as Engel-Cox pointed out, none have made it past the pilot stage. “A lot companies have been in the solar business multiple times, a number are looking at biofuels, and few at wind,” she explained. “But in the past, these efforts have been more about developing a new product-side of the business—not necessarily about integrating renewables into their operations.”

Her conclusion is that more projects will achieve commercial success if a simpler approach is taken, such as one that focuses on using renewables simply as a power source for energy-intensive machinery such as pumps and compressors.

Among the few examples of field-integrated renewable projects is Chevron’s enhanced oil recovery (EOR) project in California that used concentrated solar power to generate steam for reservoir injection. Though the solar-to-steam project was seen as groundbreaking upon startup, construction costs far exceeded the budget and it was shut down in 2014 after 4 years of operation.

This same concept is being revived half a world away in sunny Oman. Petroleum Development Oman, a government majority-held production company, is working with GlassPoint to build a solar facility that will generate 6,000 tons of steam per day for EOR injection. The project calls for the construction of four glasshouse-solar facilities, the first of which is to begin operating sometime this year.

Renewables have also been discussed as a way to lower offshore facility costs. The Norwegian certification society DNV GL presented a SPE paper at last year’s Offshore Technology Conference in Houston that showed wind turbines could be used to power injection operations of 45,000 B/D of water into one of Norway’s remote offshore reservoirs. There are other ideas being tossed around that include using wind or solar power for natural gas pipeline compression and for water desalination.

Regardless of which type of renewable-integration project upstream operators decide upon, Engel-Cox said the first step toward success will depend on the quality of economic models and site-specific studies that tell them things such as how long the sun shines or how hard the wind blows.

“I don’t think we know what the most profitable opportunities are yet,” she emphasized. “But I think looking at a variety of options is the best idea. They will have to be looked at in the context of each facility, the type of power demand it has, and where it is physically located.”

The Spar Platform: A Design That Transformed Deepwater Development

The complete paper is an extensive review of the evolution of spar designs, focusing on the progression of work that ultimately led to the application of a transformative concept to the oil industry.