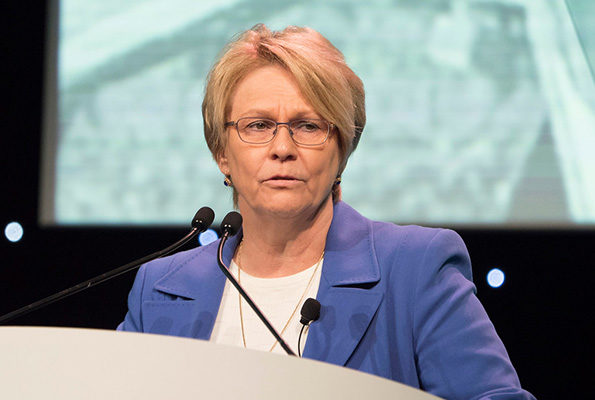 Even as the oil and gas industry looks for the next great idea to propel it forward, it should constantly reconsider past innovations for inspiration, the CEO of a major operator said Monday on the opening day of the 2017 SPE Annual Technical Conference and Exhibition.

“The point is, you don’t to have to go too far for new ideas,” said Vicki Hollub, president and CEO of Occidental Petroleum Corporation. Hollub delivered the chairperson’s luncheon speech on the first day of the conference, the key address underlining the 3-day conference theme.

Hollub cited three technologies that, although not new, have played a significant role in upstream development not only when they were introduced but in the present day. Seismic imaging, horizontal drilling, and hydraulic fracturing all have succeeded in revolutionizing upstream practices over the years and even to this day, she said. Hollub’s speech built on the conference theme of “Looking Back to Move Forward.”

“The use of these technologies together has had a powerful impact on our industry. In fact, the shale revolution, which has allowed the US to become more energy independent, would not have been possible without advancements in these three technologies,” she said. “We are seeing the benefits of all three of these technologies at Occidental, most recently in our Permian Basin position.”

Seismic imaging is about a century old, but improvements have made great advancement possible, Hollub said. “The success of the oil and gas industry begins with understanding the subsurface; we really have to understand the reservoir,” she added.

Advances in seismic helped Occidental develop key properties in the Permian Basin, the Cano Limon field in Colombia (a “game changer for both Occidental and Colombia”), and the Middle East.

For example, a 3D seismic survey taken on a Middle East field in 1996 showed 15 faults; in 2005, the map showed the same anticline with improved imaging showing 400 faults. “That helped us understand the complexity of the reservoir,” she said.

“Think of it this way: In the 1970s and 1980s, we could only identify the building. Now we are getting closer to seeing the floors. In the future, we hope to be able to see the furniture.”

Hollub showed those gathered in attendance several slides showing how technologies have developed over time to identify “sweet spots.” One example involved using seismic inversion, transforming seismic reflection data into a quantitative description of a reservoir.

Other technologies are not new but have been found to have exciting breakthrough applications. Horizontal drilling was first used in the 1930s and then became viable in the 1980s for conventional reservoirs. The dramatic shift occurred when horizontal drilling was combined with hydraulic fracturing around 2008.

The first well that was hydraulically fractured was also in the 1930s, she said, although that is subject to some debate. In the 1930s, acid was used for fracturing and, then in 1949, Halliburton introduced the modern use of hydraulic fracturing.

Its use now has exploded. “Without fracturing, US oil production would be about half of what it is today,” Hollub said.

In addition to adapting old technologies in new ways, the industry must come to terms with interpreting and incorporating data analytics into its day-to-day business operations, she said. That will continue to be an issue going forward. “The challenge is putting all of the information together and using it,” she said.

Hollub became president and CEO of Occidental in April 2016. She joined Occidental more than 30 years ago and has held a variety of management and technical positions including roles in the United States, Russia, Venezuela, and Ecuador. Most recently, she served as Occidental's president and chief operating officer, overseeing the company's oil and gas, chemical, and midstream operations.