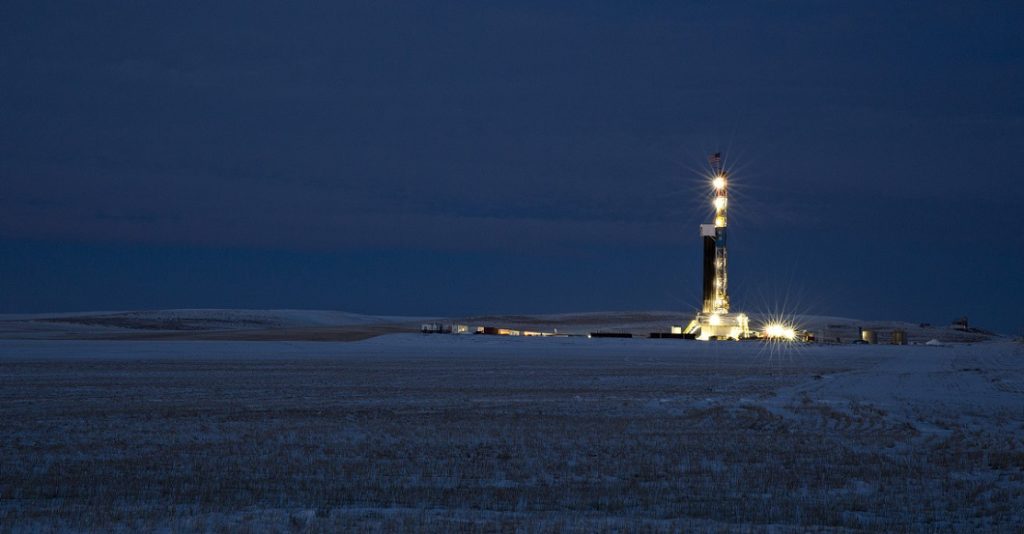 A drilling rig stands amid frigid temperatures in the Bakken Shale of North Dakota. A top producer in the Bakken, Hess performs much of its directional drilling work in the play from its remote operations center in Houston. Source: Getty Images

More than a year ago, Chevron began investigating inconsistencies in its US onshore drilling operations. It soon concluded, almost counterintuitively, that its best move would be to take its directional drillers off the rig.

Now, in the Permian Basin of west Texas and southeastern New Mexico, the major is running “about 95% remote ops in all of our rigs—that’s conventional and rotary steerable applications,” said Kelsey Prestidge, Chevron performance drilling engineer, during the recent Data-Driven Drilling and Production conference in Houston. “And the reason for that was we wanted to see more consistent, predictable results from our directional drillers which we weren’t seeing before.”

The major’s shift in drilling workflow came not long after another big shale producer did the same. Hess launched its real-time operations center in 2017, moving much of its directional drilling function from the Bakken Shale of North Dakota into its remote operations center in Houston. Soon after, the company implemented an automated directional software guidance system, covering six rigs, that improved motor slide drilling. Drilling contractor Nabors Industries aided the transition.

Hess now keeps two directional drillers in its operations center, with each overseeing 12 hours of operations. Two “rovers” remain in the field, each covering three rigs, that specialize in troubleshooting “and drilling the curves, which is the crux of the well,” said Matt Isbell, Hess drilling optimization advisor.

“Think of this as a form of process control” for directional drilling, Isbell said. “We’re removing the process variables, or at least making sure they stay within a certain range.” Compared with 2012, about a third of the company’s operated rigs are drilling the same well count in the Bakken.

Chevron’s “rover” teams each oversee an area with around four rigs. They are responsible for “picking up” and “letting down” the bottomhole assembly as well as general troubleshooting, Prestidge explained. Directional drillers in the operations center are able to perform measurement-while-drilling work.

For Chevron’s drilling contractors, the scope of work has not changed, as there is still a driller and tool pusher on location. “The only thing that’s a little bit different from what we had been doing is that the driller is now responsible for setting up the slides, and then the [directional driller] that we have in the remote center will go about executing the slides,” Prestidge said. A push-to-talk phone is set up on the rig to ensure easy communication between the two.

These recent advances have caused Chevron to ponder a future in which directional drillers rarely set foot on an actual rig. Prestidge said the team and its contractors now have to consider, “How do we allow them to understand what we used to do?”

“In my opinion, virtual reality is the only way that we can truly train going forward,” she said, adding that this even applies for drillers on location who are implementing slides. “You can have a driller in a matter of an hour essentially drill maybe 12 curves if you just rewind it and keep watching over and over how you do it.”

Hani Elshahawi, Shell digitalization lead, deepwater technology, believes the process of geosteering and directional drilling could be improved by increasing responsiveness during operations. “The way we’re doing geosteering and directional drilling, for the most part today, is like driving by looking in the rearview mirror,” he said. “You’re trying to guess what curve is coming ahead of you based on what’s behind you.”

Shell, which has onshore real-time operations centers that mostly focus on geosteering, has experimented with machine learning to automate geosteering. This has proven “as effective as your best-in-class geosteerers,” he said. While directional drilling also can largely be automated, it is best done at the edge, close to the top drive.

Shell hopes to build on that level of automation by incorporating electromagnetics and seismic to map projected drilling areas in the subsurface. This is “true automation,” Elshahawi said.

Integrating directional drilling and geosteering, and particularly all of the software dedicated to the two functions, will remain a big challenge going forward, Isbell added, though he predicts those functions will someday converge onto the same piece of software.