BP has agreed to sell its entire business in Alaska to Hilcorp Alaska, based in Anchorage. Under the terms of the agreement, Hilcorp will purchase all of BP's interests in the state for a total consideration of $5.6 billion.

The sale will include BP's entire upstream and midstream business in the state, including BP Exploration (Alaska) Inc., that owns all of BP's upstream oil and gas interests in Alaska, and BP Pipelines (Alaska) Inc.'s interest in the Trans Alaska Pipeline System (TAPS).

Bob Dudley, BP group chief executive, said in a press release, “Alaska has been instrumental in BP's growth and success for well over half a century and our work there has helped shape the careers of many throughout the company. We are extraordinarily proud of the world-class business we have built, working alongside our partners and the state of Alaska, and the significant contributions it has made to Alaska's economy and America's energy security.

"However, we are steadily reshaping BP and today we have other opportunities, both in the US and around the world, that are more closely aligned with our long-term strategy and more competitive for our investment. This transaction also underpins our 2-year $10-billion divestment program, further strengthening our balance sheet and enabling us to pursue new advantaged opportunities for BP's portfolio within our disciplined financial framework."

Hilcorp will pay BP a total consideration of $5.6 billion, comprising $4-billion payable near-term and $1.6 billion through an earnout thereafter. Subject to state and federal regulatory approval, the transaction is expected to be completed in 2020. The deal forms a significant part of BP's plan to divest $10 billion of assets over 2019 and 2020.

Commenting on the deal, Rowena Gunn, a Wood Mackenzie analyst, said, “The majors are making progress with their divestment campaigns. This will mean long-held assets and territories will be let go. BP made such a deal today with its sale of all US Alaska assets to privately owned Hilcorp.”

Gunn added, “The deal is important for Alaska as it changes the operator of the flagship Prudhoe Bay field. Growth is coming westward from ConocoPhillips and Oil Search-operated projects. But all North Slope barrels rely on the infrastructure established at Prudhoe Bay.”

Hilcorp entered Alaska Cook Inlet in 2011 and the North Slope in 2014. Hilcorp already holds interests in 31 assets across the Cook Inlet and North Slope—producing 41,000 BOE/D.

“This deal vaults Hilcorp to be the second-largest Alaska producer and reserves holder, behind only ConocoPhillips. Continued investment in maintaining Prudhoe Bay will be the company`s main endeavor. But the assets are not without upside. A 2019 3D seismic campaign will reveal further targets to prolong the legacy field while the company is also growing Milne Point production and considering a potential FID [final investment decision] at the Liberty field (now 100% owned),” Gunn said.

BP had made a series of regional assets divestments (mostly to Hilcorp) since 2014 as focus shifted to deepwater and tight oil assets. Alaska used to account for over 5% of the major’s worldwide production volumes. That has since fallen to 2% following the Kuparuk-asset swap with ConocoPhillips last year.

Gunn said, “This will not be the last deal in the region. ExxonMobil may be next to follow BP, Anadarko, Pioneer, and Marathon in the list of companies having sold out of Alaska. So far ConocoPhilips and Hilcorp have played the consolidating roles—now controlling over 72% of Alaska’s production.”

BP began working in Alaska in 1959, drilling the confirmation well for the Prudhoe Bay oil field in 1968 and in the mid-1970s helped build the 800-mile TAPS. BP began producing oil from Prudhoe Bay in 1977. The giant oil field—the most prolific in US history—has to date produced over 13 billion bbl of oil and is estimated to have the potential to produce more than 1 billion further bbl.

Hilcorp is the largest private oil and gas operator in the state, currently operating more than 75,000 BOE/D gross production.

BP continues to develop its business in the US, where between 2005 and 2018 it invested over $115 billion, more than any other energy investor, according to the company. In the second quarter of 2019, BP's net oil and gas production from the US averaged over 921,000 BOE/D, from major interests in Alaska, onshore Lower 48, and deepwater Gulf of Mexico.

In late 2018, BP acquired a portfolio of high-quality onshore US oil and gas interests from BHP for $10.5 billion, adding 190,000 BOE/D net production. BP also continues to develop its business in the deepwater Gulf of Mexico, bringing on a series of new projects on its major producing assets. The new $9 billion Argos platform on the Mad Dog field is expected on stream in 2021. 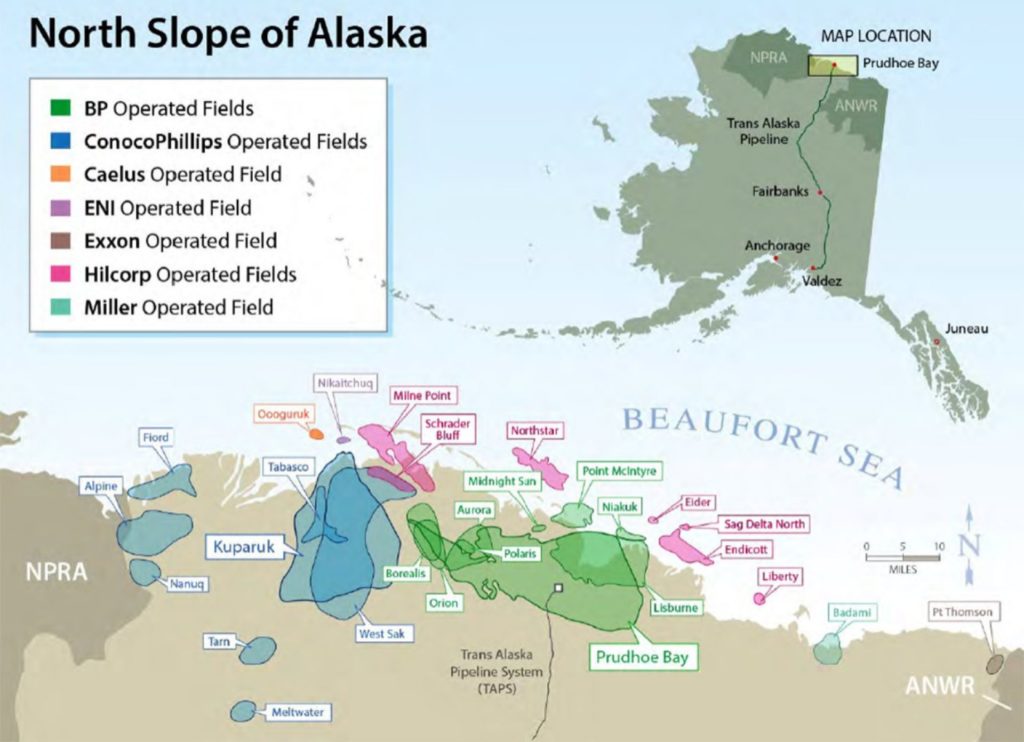