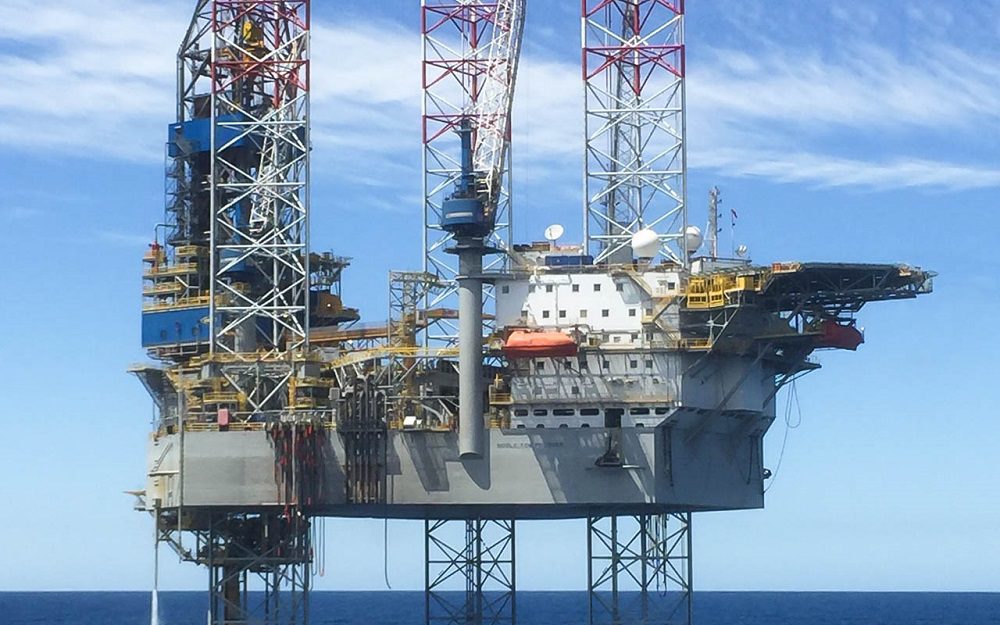 The Dorado-3 appraisal well was drilled by the Noble Tom Prosser jackup rig in 95 m of water and reached a MD of 4,643 m. Source: Noble Corporation.

Santos Energy has wrapped up its 2019 offshore drilling program with another positive flow test from its Dorado oil and gas field in the Bedout Basin offshore Western Australia.

The initial flow test of the Caley reservoir from the Dorado-3 appraisal well has confirmed the main oil pool in the field is capable of producing flow rates at the higher end of predrill expectations, the Adelaide-based operator said 8 October.

The initial cleanup flow test of the Caley reservoir was conducted over a 12-hour period and reached a maximum measured rate of 11,100 B/D of oil and 21 MMscf/D of associated gas through a 68/64-in. choke. The oil rate is one of the highest ever from a North West Shelf appraisal well test, Santos said.

The test was conducted over an 11-m net interval between 3,999–4,015-m MD with 220 psi of drawdown. As with the Baxter flow test conducted in September, Caley production was constrained by surface equipment, indicating the reservoir has the capacity to flow at much higher rates, the company said.

“The results are very encouraging for development of the shallow-water Dorado field, with the test indicating very high potential flow rates of around 30,000 B/D from each single production well in the Caley reservoir,” said Kevin Gallagher, Santos managing director and chief executive officer, in a company news release.

Dorado-3 is on Petroleum Permit WA-437-P, where operator Santos has an 80% interest and Carnarvon Petroleum holds the remaining 20%. The well is 160 km north of Port Hedland and 1 km northwest of the Dorado-1 discovery made in July 2018.