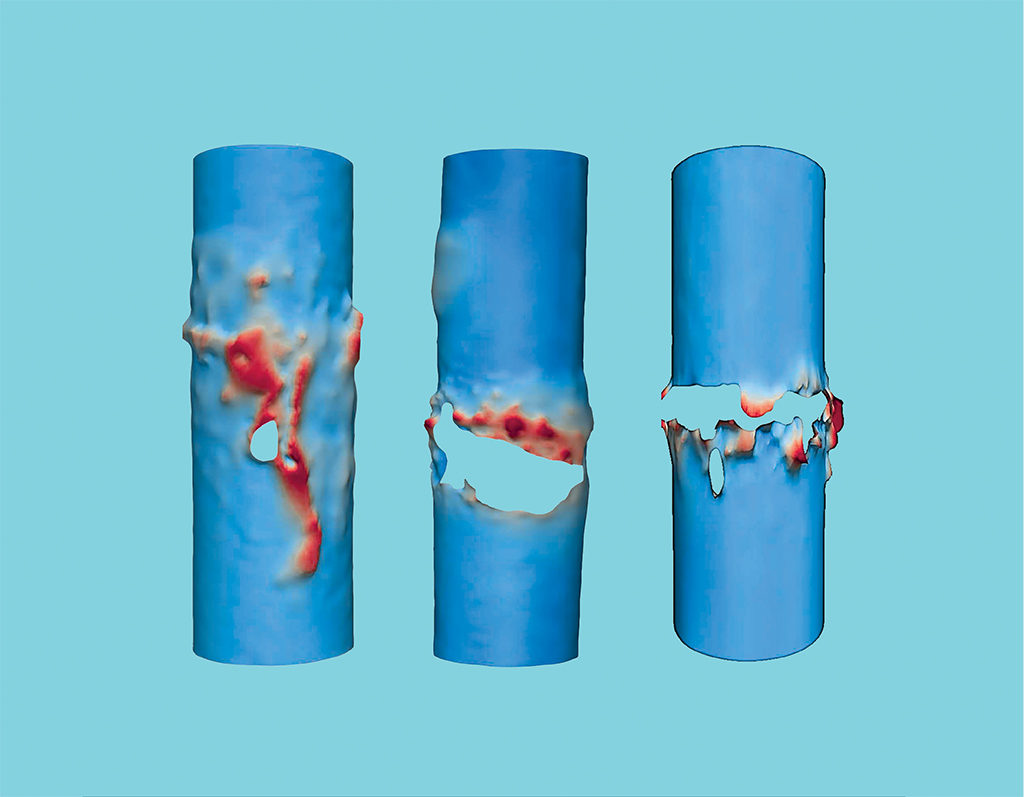 Source: DarkVision Technologies.
Acoustic scans of the inside of a horizontal wellbore show a large breach caused by a fracture plug leak which led to severe proppant erosion. Such big holes can form without warning and will reduce and redistribute the energy being used to stimulate a tight reservoir.

Shale producers around the world have learned in recent years that they cannot take wellbore integrity for granted.

During pressure-pumping treatments, the interplay of hydraulic fracturing and formation geomechanics is deforming and even shearing steel casing. In the worst of cases, this means that some operators have lost access to long sections of a wellbore before it ­produces a single barrel of oil.

This is largely not viewed as an inter-well challenge similar to frac hits. Rather, it is considered to be intrawell phenomena. The problem can take several forms and has no universal driver.

George King, an independent consultant and leading technical voice on hydraulic fracturing, points out that not every unconventional asset is affected—indicating that geology and understanding of the rock fabric matter. However, information he has collected from client operators shows that in certain US shale and tight oil fields, between 20%–30% of horizontal wells are impacted to some degree.

A commonly reported version of the problem emerges after just a few stages at the toe-end of a horizontal well have been fractured. As another plug is pumped downhole to continue the completion, it suddenly stops 1,000 ft to 5,000 ft short of its target. This could happen in the bend, or it could be somewhere deep in the lateral.

Often the deformation is described as ovalling. If a restriction consumes much more than a tenth of an inch of the pipe’s original internal diameter, there is the potential that unstimulated stages beyond the stopping point are lost to conventional plug-and-perf methods. This fate can sometimes be avoided by running slim-profile perforating guns, but then other isolation technologies are still needed to replace conventional plugs.

Unconventional operators in China, Argentina, Canada, and the US have all faced the issue. In response, the technical community has recently stepped up collaboration efforts at industry conferences to find answers.

In China, the issue appears to be more widespread on a per-well basis. National oil companies working the Sichuan Basin, the country’s most active unconventional area, have reported that more than 40% of gas wells have experienced casing deformation or failures. Like their US counterparts, Chinese operators typically realize the problem during a post-fracturing tool run.

When engineers went searching for clues on how fractures move beneath the surface, they expected to uncover important learnings. They did not know they were on the path to a new invention.

UPDATE: Oil Industry Budget Cuts Adding Up Across the Globe

The list of companies that are slashing millions and sometimes billions from their annual spending programs is growing longer as the ripple effects of a price war and pandemic spread across the globe.