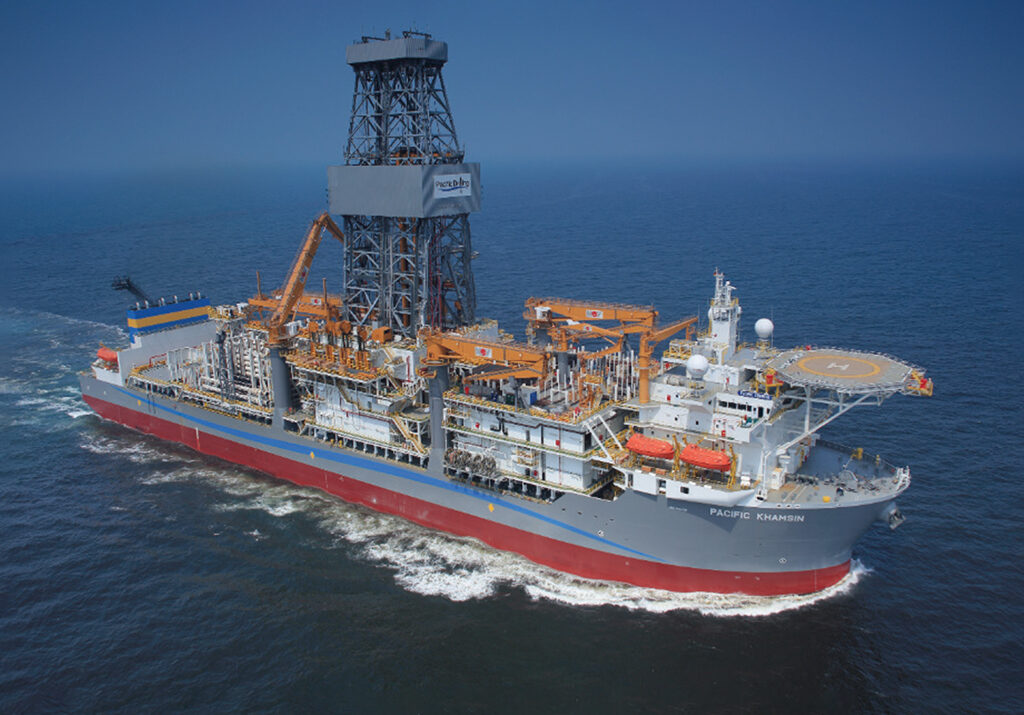 Source: Equinor.
Equinor’s Monument well was drilled by the Pacific Khamsin in the ultradeep waters of the Gulf of Mexico.

Four recent offshore discoveries served as a reminder that exploration is migrating offshore in the Western Hemisphere.

The discoveries off Brazil, Suriname, and the US, all in deep water, offered a stark contrast to the fast-contracting US shale business. To be fair, all the wells were spudded before the oil price crash which as forced deep cuts in offshore drilling.

Apache, which has shut down drilling in the Permian Basin, made a second discovery in its 1.4-million-acre block offshore Suriname, identifying what it said is a geologically distinct area.

Petrobras made its first discovery in the Uirapuru block, which is located near many of the richest pre-salt fields in the Santos Basin. The only details offered about the “pioneer” well below the salt zone is that it is known as Araucária, 125 miles off the coast from Santos in 6,500 ft water depth.

A second Petrobras well in ­Campos formation “identified the presence of oil” in the Sudoeste de Tartaruga Verde block. The Natator well, is located above the salt layer in water that is 3,500 ft deep that is 80 miles from the city of Macaé

The two biggest partners on the Araucária well are ExxonMobil and Equinor, each with 28%. Both had made significant investments in US shale, but at the moment have better things to talk about offshore.

When ExxonMobil announced capital spending reductions it said that the biggest cuts would be in the Permian Basin, where it plans to reduce drilling and completions until conditions improve.

Equinor, which has dropped operations in the Bakken, has announced a discovery in the US Gulf of Mexico. The Monument well is deep, with total depth of 33,348 ft into the Paleogene, and it is the first Equinor-operated well drilled in the Gulf of Mexico since 2015.

“In the current low oil price environment, Equinor’s Monument discovery is a welcome one for the partners—Repsol and Petronas subsidiary Progress Resources—and the wider US Gulf of Mexico. The discovery proves the mature region still has more life in it,” said Mfon Usoro, senior research analyst at Wood Mackenzie.

In this case and the others, what they found sounds encouraging, but details are limited. The Equinor release said they found 200 ft of oil pay in good-­quality rock in the Paleogene sandstone.

“We are pleased to have proved an accumulation of movable hydrocarbons in the Monument exploration well. However, determining the full potential of the discovery will require further appraisal drilling,” said Bjørn Inge Braathen, senior vice president of exploration in North America.

Wood Mackenzie said Equinor will be drilling more wells in the Paleogene where the potential is enormous. These deep reservoirs can be tricky to develop. A large volume of oil in the ground is sometimes divided into compartments, resulting in wells that produce far less than expected. Ultrahigh temperatures and pressures are also associated with this ultradeepwater play.

Apache’s stock bounced up on a bad day for oil stocks on the news of its second discovery off Suriname. The Sapakara West-1 well provides further evidence that the large oil find off Guyana extends east to neighboring Suriname.

Apache and its 50% partner, Total, encountered 259 ft of oil and gas liquids in two intervals in the 20,700-ft deep wells. It said more than 80% of the zones discovered appeared likely to hold high-quality oil.

“Importantly, our data indicates that the Sapakara West-1 well encountered a distinct fan system that is separate from the Maka Central-1 discovery we announced in January this year,” said John J. Christmann, the president and chief executive officer of Apache.

The next drilling target will be located between the two discoveries in a block that Apache said could hold another 50 prospects.

Its shares are up nearly 50% on the news, but in early April shares were still down 80% year to date.

In every announcement a key word was oil. While the price for crude is a fraction of what it was, natural gas is worth less and is harder to transport from remote areas.

Premier Oil and its partner 88 Energy announced an onshore discovery of mobile hydrocarbons on the North Slope of Alaska. Unfortunately, they found gas condensate. The Premier release said the gas would be so difficult to commercially develop that it made “the decision to exit Area A as soon as regulatory approvals have been received.”