The financial stress level at Denbury Resources moved up another level with its disclosure that it is skipping an $8-million payment due Tuesday (30 June) and that its bank credit limit has been halved.

Denbury said it missed the due date for the payment “in order to evaluate certain strategic alternatives, none of which have been implemented at this time.”

The nonpayment does not put the company into default on those notes—it has a 30-day grace period before that applies—but skipped payments are often a warning of a bankruptcy filing ahead.

This is the not Denbury’s first sign of trouble. Its annual report (10k) included a warning that there is “substantial doubt about our ability to continue as a going concern.”

Reasons included weaker cash flow in recent months and $585 million in debt coming due in 12 months.

Denbury needs major concessions by bond holders. Mark C. Allen, chief financial officer for Denbury, said “We are engaging in discussions with our lenders and bondholders, regarding a potential comprehensive restructuring of the Company's indebtedness.” 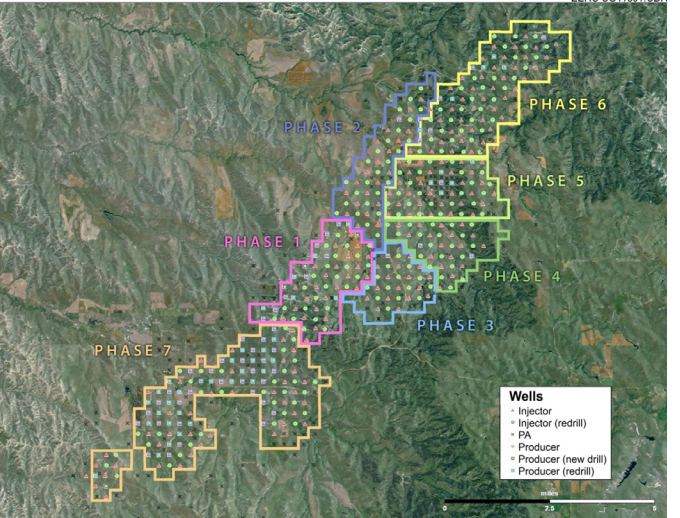 A diagram of the pattern of injection and production wells at Denbury’s Bell Creek field in Montana where production is approaching 6,000 b/d. Source: CMTC 151476

The oil price crash in March made such negotiation tougher by causing a mass reduction in the valuation of the oil and gas assets used to secure bank loans—known as the lending base—for many US oil companies.

A survey of lenders and borrowers in early March by Haynes and Boone before lending bases were reviewed in April, predicted significant reductions, with the majority predicting cuts of 10 to 20%. When the law firm did the survey again shortly after the market crashed, the range moved to 20–30%, with a significant number predicting 40% reductions.

Denbury is feeling that squeeze. Its statement said that while the company’s borrowing base remained unchanged for now at $615 million, the maximum the company could borrow from the bank was $275 million. Since then the company has borrowed $200 million.

Based on the current industry outlook for lingering lower prices, the company’s borrowing base is likely to go down when it is reviewed again in the fall.

Denbury said it reduced the value of its assets by $73 million after doing an evaluation that included all the costs associated with developing and producing oil using carbon dioxide injections. The slowdown in development is also going to hurt the value of its undeveloped acreage.

“The Company would expect to record significant writedowns in subsequent quarters, as the 12-month average price used in determining the full cost ceiling value would then continue to decline throughout 2020,” it said in its first quarter earnings report.

If this leads to a bankruptcy filing—an out of court deal with creditors remains possible—it would be a large one. Its debt as of 31 March totaled $2.3 billion, putting it among the five largest filings so far this year on the Haynes and Boone list of oil and gas company filings.