Denbury Resources has filed for bankruptcy protection as part of a deal with creditors to cut its total debt by nearly 90%.

The oil company which specializes in enhanced oil recovery in the US is planning for a quick trip through the process with a timeline that could allow it to complete the process this year.

At the time of the filing on 30 July, the deal to reduce its debt by $2.1 billion in exchange for shares and warrants had the support of more than two-thirds of its creditors, Denbury said in its release.

The company produces more than 21,000 BOPD from old fields using CO2 injection, but the debt associated with the cost of expanding its CO2 production, pipelines, and projects exceeded what it could pay. This year’s COVID-19-driven oil-price crash forced the company to begin working toward a major debt reduction, after working for years to whittle down what it owed.

“Even after taking these steps, it became apparent that a comprehensive financial restructuring would be necessary to address our legacy debt burden and create a clear path forward for the company,” said Chris Kendall, Denbury’s president and chief executive officer. 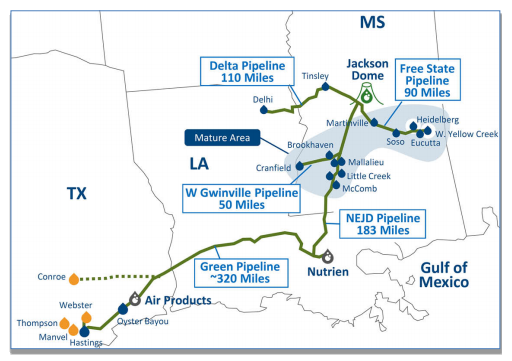 Denbury’s biggest operations are focused on the Gulf Coast and include a pipeline which allows it to buy carbon dioxide from plants in Louisiana and Texas. Source: Denbury Resources

Denbury is not a good case study for those trying to predict how a spate of other oil companies filing for bankruptcy will fare. It is a unique business—the only publicly traded company in the US whose business is focused on producing, delivering, and managing CO2-injection EOR projects, Denbury said.

Its production outlook is the opposite of the shale produces filing for bankruptcy whose business is built on short-lived, fast-declining wells. It revives old, conventional fields with CO2 injections, and the slowly declining fields can produce for years to come.

It also buys 3 million tons of CO2 a year, exceeding the carbon emissions from its operations. It plans to be completely carbon neutral—including the emissions of the oil it sells by 2030, according to its disclosure statement.

The agreement will eliminate its $2.1 billion in bond debt. Those creditors will receive stock and warrants but buy the shares at a set price. The amounts will vary depending on the class of creditor.

Denbury will be able to borrow up to $615 million from its bank lenders, who are paid in full.

Shareholders will receive warrants valued at $2.5 million if equity holders as a group vote to support the plan.

The complete paper presents a large-scale work flow designed to take a vast amount of data into consideration. The work flow can be scaled for projects of any size, depending on the data available.