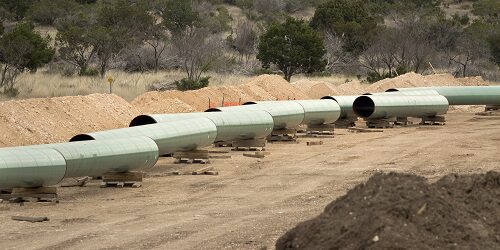 The cancellation of Enterprise Products Partners’ Echo 4 oil pipeline from the Permian to Houston is further evidence of the latest glut in pipeline capacity out of the West Texas basin.

An indication of how much spare capacity is available because of weak demand is that Enterprise said it reached a deal with customers who had agreed to ship 450,000 B/D of oil over the line that allows them to move less crude over other Enterprise pipelines in exchange for longer-term deals.

Other pipeline companies with growth plans are in a similar position but so far have postponed projects rather than killing them.

“Permian oil infrastructure is already overbuilt. We anticipate that Permian oil output will recover to pre-COVID records of 4.9 million B/D by the end of the next year, but, even then, we will have 2 million B/D of unutilized outbound capacity,” said Artem Abramov, head of shale research for Rystad, an energy information and consulting firm.

Fig. 1 shows the sharp dip in production has passed, but slow growth is expected in the years ahead.

Back in January, when Permian production was near its peak, things looked different. Wood Mackenzie then said that pipeline projects expected to add 3.5 million B/D of capacity out of the Permian by the end of 2022 would “lead to overcapacity short term.”

Many of those projects date back to the pipeline capacity shortages in the Permian in 2018, which depressed oil prices there and drove some producers to export their oil in tank trucks.

Crude demand crashed the same year that pipeline construction was expected to surge in the US. Pipeline companies got a hint of the coming slowdown in 2019, when the oil companies slowed drilling and completions as they focused on spending cuts.

“Stalled production at the end of 2019, as well as this year’s declines, have put the brakes on pipeline project completions this year and next,” according to a report by Morningstar Commodities Research. It said, “The data show 2020 was expected to be the biggest year so far for crude projects based on capacity miles.”

The report, published in June, said projects representing 25% of those miles of pipe had been completed, mostly in the form of Epic Midstream’s 600,000 B/D line from the Permian to Corpus Christi, Texas.

Another 37% of US projects were “still under construction,” including the Echo 4 line. Other 2020 projects had been delayed or put on hold with no completion date, Morningstar said.

The upside of canceling the Echo 4 project is that it reduces the company’s capital expenditures by $800 million. Enterprise said those savings will help reduce its 2020 capital expenditures from $2.8 billion to $900 million. That will increase the cash flow available for payout to investors, who buy the stock for its hefty distributions.

Enterprise also said it expects US production levels not to get back to 2019 levels for at least 2 years, “even if higher oil prices incentivize drilling.”

“That means the fate of midstream pipeline companies in this environment is closely tied to that of producers. We expect the result to be consolidation in both sectors of the oil market,” the Morningstar report said.