Editor's Note: Daniel Yergin, a renowned authority on energy, international politics, and economics, will be the keynote speaker for the AIME 150th Anniversary Celebration at the SPE Annual Technical Conference and Exhibition on 26 October. The Pulitzer Prize winning author of  The Prize, The Quest, and the recently published The New Map: Energy, Climate, and the Clash of Nations will reflect on the past and future of the petroleum industry. Click here to register for ATCE.

Daniel Yergin, author of The Prize and The Quest, introduced The New Map: Energy, Climate, and the Clash of Nations in a webcast on 22 September. The new book’s status on Amazon—US best seller in energy and UK best seller in geopolitics—is telling, not only about the book’s themes, but also about the interconnectedness between them and the implications for what Yergin refers to as a disrupted future.

According to Yergin, the title of the continuation of his history of the global oil and gas industry is a metaphor for making our way through a world that has been disrupted in many ways.

“Energy and geopolitics are very interconnected, but in a world that is becoming more fragmented, the need for a framework to serve as a roadmap to better outcomes in a future disrupted by energy transition and a difficult and rocky globalization is critical,” he explained.

Below are several key takeaways from the book:

The era of shale isn’t over, but a second revolution will be needed. Yergin said shale was having a difficult time before the COVID-19 pandemic. He believes it will begin growing again in another year and will serve as a building block for a new world oil market, but will never reach the volumes produced before the pandemic.

“Money helps,” he said, referring to the 2015 Wall Street injection of money into shale. “Shale companies will have to develop a new social contract with investors if they want to bring back investors.”

There are two eras in energy, according to Yergin: before- and after-Paris. Emissions and the focus on them have grown, and degrees—Fahrenheit or Celsius—have become a benchmark against which much is being measured, including for investors and companies.

The future availability of capital is a question for the industry. As ESG has become a much bigger and more powerful focus for investors over the past 2 years, so have its impacts on governments’ and companies’ strategies. The impact of ESG is apparent in energy stocks as a portion of the S&P 500 giving way to tech and big pharma.

However, Yergin pointed out that dividends and returns, as well as social and environmental factors, are important to investors. To protect these, many majors have cut back spending by 30%, and some US companies have cut 50%. 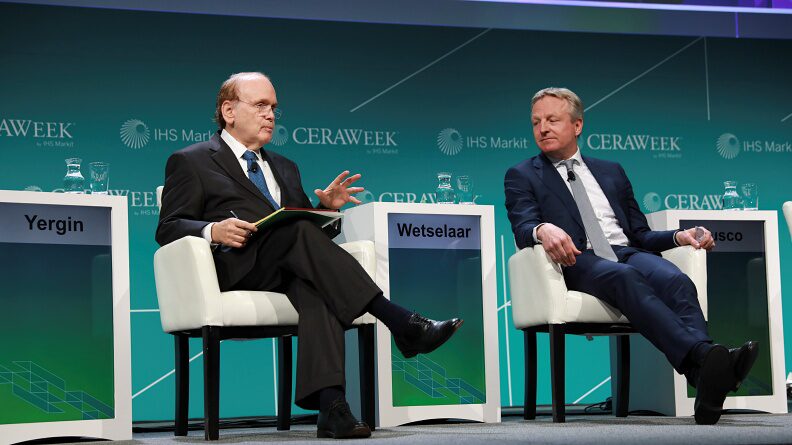 Daniel Yergin, author and vice chairman of IHS Markit, and Maarten Wetselaar, director of integrated gas and new energies at Shell, discuss the future of hydrocarbon fuels in 2019. Source: Ceraweek by IHS Markit

“Directionally, it will happen, and with enormous effort,” said Yergin. In the past, energy transition was seen as an evolution rather than a revolution. “Energy transition was very little in our vocabulary 2 years ago, but now it is at the center.”

With the EU having committed to net zero by 2050, public engagement and public policy engagement have coalesced around it. However, the economic wound of COVID-19 will act to some degree as a brake, and the transition will be much more challenging following the collapse of the world economy.

“Today 80% of world energy comes from fossil fuel; 30 years to transition is a pretty short time,” he said. In answer to a question about using oil revenues to transform away from dependence on oil, Yergin said the pandemic will make it more difficult to finance the diversification.

Hydrogen will play an important role in the energy system of the future. The hydrogen boomlet of 12 years ago faded, said Yergin, but now it is a big focus, with many larger companies looking at it as part of their portfolios going forward.

“It is an innovation focus that reflects the seriousness of the post-Paris era.”

Energy transition will have multiple implications in India, where there is a big commitment to wind and solar for electricity but an equally big commitment to dealing with health conditions of people in poor villages who still burn wood in their homes.

Sources cite indoor air pollution as the biggest environmental culprit today. India is moving toward getting natural gas and propane to its villages. The situation is similar in Nigeria. For these and many other countries where poverty is rampant, energy transition means moving from pre-modern to commercial energy.

“These countries face a different set of issues,” Yergin said. "Their vision of energy transition is not the same as in countries like Germany and the Netherlands.”

Supply chains have been stressed during the pandemic, and more stresses loom. Will this lead to more trade wars? According to Yergin, something he refers to as fragmenting globalization is now occurring.

“The scale of what will be required in wind, solar, and other low-carbon energy sources to meet net-zero targets will make supply chains critical,” he said. “You can’t separate them.”

Transitions entail changes in power. For years, the axis of energy power was OPEC/non-OPEC/OPEC+. Negative oil prices threw energy and the world into a new order with the US, Russia, and Saudi Arabia as the triad of energy power and the US and China as its largest and most important economies.

What will energy transition mean for these countries regarding power relations. Looking to the future, what China needs from an energy transition is to reduce its dependence on imported oil. To that end, it is pushing electric cars more than anyone else. It is well-positioned in terms of supply chains for solar and lithium batteries. According to Yergin, China will do well in the new world order.

The same won’t necessarily be true for countries that export oil and gas.Demand won’t stop tomorrow or even 2050. But, focus on diversification in areas such as the Gulf countries, which have talked about it in the past, is now more urgent. Vision 2030 for Saudi Arabia and Abu Dhabi are examples.Russia has a more diversified economy and is the world’s largest exporter of wheat, but 40–50% of its budget comes from oil and gas.

“What will be the role of natural gas in Europe 10 years from now? These are big questions for countries that export a lot of oil and gas,” Yergin said. “People thought about volumes from the US shale boom but not about economic impact,” he said, “and they were even less aware of how it would factor into global affairs,” referring to the energy influence and position of the US as the world’s largest producer of oil and gas.

“What will the superenergy power of the future look like?” Yergin explained that the world’s most important economies, the US and China, are more connected than people realize.

“They are strategic competitors in a new cold war. Other countries don’t want to have to choose between them. Neither do companies.”

Mobility is a cornerstone of transformation and transition, according to Yergin, talking about what he calls the “triad” of electric cars, ride hailing, and autonomous vehicles that could change the picture.

“They’re all having a difficult time currently, because they’re being pushed back by a technology crisis and access to capital. But if you put them all together, a startlingly different vision could bring about ‘Big Mobility’—different types of transportation modes and companies based on big fleets of vehicles, all emerging from software platforms.”

All of this will impact oil demand. Net zero will result in a significant drop in oil demand by 2050, but the demand won’t be eliminated. Fading will take a long time.

“It’s difficult to generalize while we’re still in the middle of the pandemic and the degree to which it has upended economies,” said Yergin. Gasoline demand was down 50% in April; it is now down 17–18% and holding. One big change that will impact mobility and oil demand is the nature of work.

“With the pandemic, 6 years of digitalization has been compressed into 6 months,” he said. As more people work from home, there will be less commuting. Conversely, right now more people are driving because of wariness about public transportation. “To achieve balance, we need a scenario approach,” Yergin said.

“We won’t know what economic growth will look like when we come out of this. Will it be feeble or vibrant?” Yergin thinks there will be an upsurge, which will impact demand. He is an eternal optimist, he admits.

“This is a time of great change. There are many things that can, and need, to be done,” he said.

“There has never been as much differentiation in strategies between US and European oil companies—or between those regions’ societies—as there is today. Our future will be full of surprises. But climate as an issue and the clash of nations will remain and require management. We need a framework for that.”