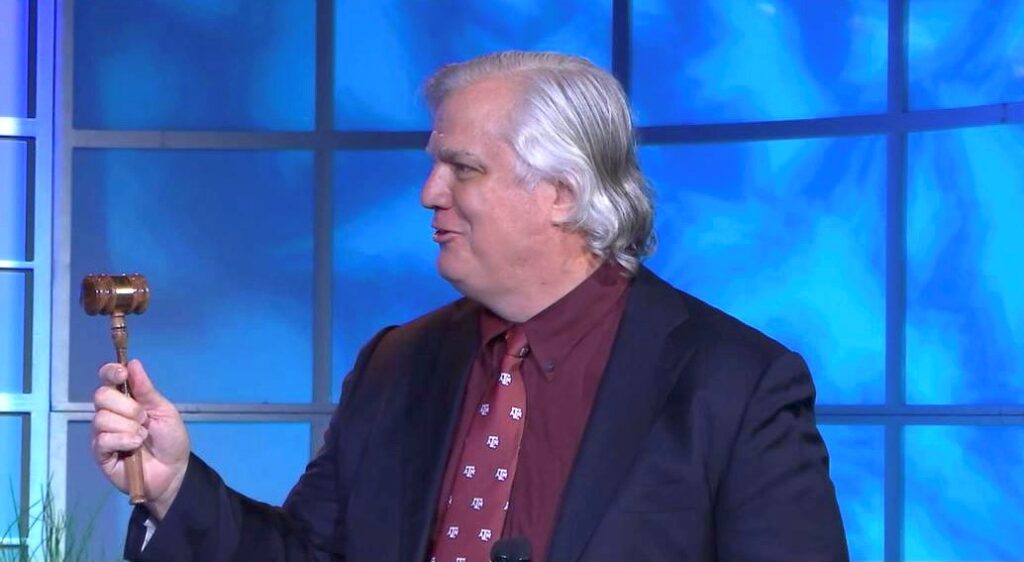 Tom Blasingame, the SPE 2021 president, holds the gavel for the first time at the SPE Annual Technical Conference and Exhibition. Source: SPE.

Ever since Tom Blasingame was announced as the 2021 SPE president more than a year ago, he had been looking forward to the day he would officially assume the highest-ranking volunteer position within the organization. That moment finally came, but not quite as he or anyone else expected.

“I can assure you, I had a grand plan,” he gently quipped during his inaugural speech. “But the pandemic pretty much wiped that slate clean and led me to focus on where we and how we are to continue.”

Blasingame, an SPE Distinguished Member and petroleum engineering professor at Texas A&M University, officially assumed his new duties during a small ceremony attended by invited guests and SPE staff in Houston on Monday.

The event helped kick off the SPE’s Annual Technical Conference and Exhibition (ATCE) that runs most of this week. Reflecting one of the grand challenges facing the new president, the rest of ATCE is being held entirely online in response to the COVID-19 pandemic that swept across the world earlier this year.

Donning a coat and tie instead of his trademark beige coveralls, Blasingame told attendees in the flesh and those joining via the online broadcast that the theme of his SPE presidency is “Survive, Revive, and Thrive.” Along these lines, his top priority will be to steer SPE through the recovery process “while also seeking to serve the traditional needs of our members.”

Noting that the industry has a long history of weathering storms, Blasingame described the headwinds being faced today as a “near-perfect hurricane” brought on by a global pandemic, financial turbulence, and a historic drop in oil demand.

But he highlighted another force that is reshaping the upstream industry, one that predates the pandemic and is certainly going to outlive it.

Environmental, social, and corporate governance (ESG) criteria have in just a few short years risen from obscurity to become a major lens through which public stakeholders and global investors view upstream companies. “If you don’t know it, you'd better memorize it—put it on your pillow,” Blasingame said of the three-letter acronym.

To his point, ESG has driven many of the world’s largest oil and gas producers to take on a more active role in the energy transition and climate change, e.g., investments in alternative energy systems and setting net-zero-emission targets. And though SPE has served as the industry’s largest public forum for discussions on the energy transition, Blasingame believes the time is right for SPE to take another step forward by embracing a facilitating role.

Among his proposals is that the organization make a public commitment to the energy transition by adding a new pledge to its overall mission: “SPE will continue to evolve toward a low-carbon future where our extractive resources—that is oil and gas—can continue and amplify their contributions to our global society through diverse utilization and through collaboration with other energy providers.”

Speaking to the tens of thousands of professional members that form the main body of SPE, Blasingame added the industry is well equipped to bring this vision forward.

“We have the experience. We have the motivation, and we have the passion to do so,” he said. “And we have an obligation to continue to provide the most reliable, most secure, most economic, and most efficient energy resource. We are energy transition, and it cannot happen without us and our labor.”

To learn more about Blasingame and his presidential goals read his JPT column here.

Taking part in the socially distant handover of the SPE presidential gavel was 2020 SPE President Shauna Noonan, the director of artificial lift engineering for Occidental Petroleum.

As of March, marking the end of the organization’s fiscal year, Noonan shared that SPE was forced to cancel 15 events. “It remains highly uncertain when we’ll be able to return to holding meetings in person,” she said, while noting that SPE has “reacted as quickly as possible” to switch most of its scheduled events to virtual ones.

Noonan highlighted that SPE staff has been reducing costs while other savings are coming from moving the Distinguished Lecturer series and JPT to online-only formats.

It was last October when Noonan assumed the top role at ATCE, which was held in her home province of Alberta. From a podium in Calgary, she announced that her platform would be focused on strengthening SPE’s core technical programs.

About 5 months later, her chosen motto of “SPE Strong” would find new meaning, though, as the scope of the pandemic became clearer and that first batch of conferences was forced to be canceled or postponed.

Noonan warmly recalled how she noticed that some people had taken her tagline and adapted it to “SPE Stay Strong” as they exchanged encouraging messages with each other. Looking back, she takes pride in how the theme of strength expanded beyond its meaning in her original platform.

“The strength of our program gave members a place to go when we couldn’t leave our homes. The strengths of our leadership in all areas of SPE, they allowed us to quickly shift and expand our society into the virtual space. And finally, and most importantly, it describes the incredible strength and compassion of our members that kept spirits lifted and one another motivated,” she said.

Noonan also remarked on several SPE initiatives that blossomed under her tenure, including Energy4Me, Women in Energy, SPE Live, and the Business Management and Leadership Program. She said though these were programs that focused on nontechnical or nontraditional topics, they “have been greatly needed and consumed by our changing and diverse membership.”

Throughout her speech, Noonan expressed gratitude to the many volunteers and staff who have preserved SPE through the challenging conditions. She also sought no pity for the fact that her role as a globetrotting ambassador of both SPE and the industry was impacted by current events.

“My year as your president has not been defined by the pandemic nor the industry downturn,” she said. “It is filled with memories of meeting members all over the world. And I want to thank those sections for the wonderful hospitality, introducing me to their beautiful countries and customs.”

Now a past president, Noonan will stay active in promoting the organization’s programs and will remain on the SPE Board. At next year’s ATCE in Dubai, Blasingame will be handing the gavel to Kamel Ben-Naceur, the CEO of Nomadia Energy Consulting who was elected by the organization’s board to become the 2022 SPE president.

Inter-Well Relationships Are Messy, But That Can Be a Good Thing

Groups of wells communicate, interfere, and hit each other. It is an unruly scene that can offer benefits. Three stories look at why competing fracture networks can add to the production from rock that might otherwise be missed.