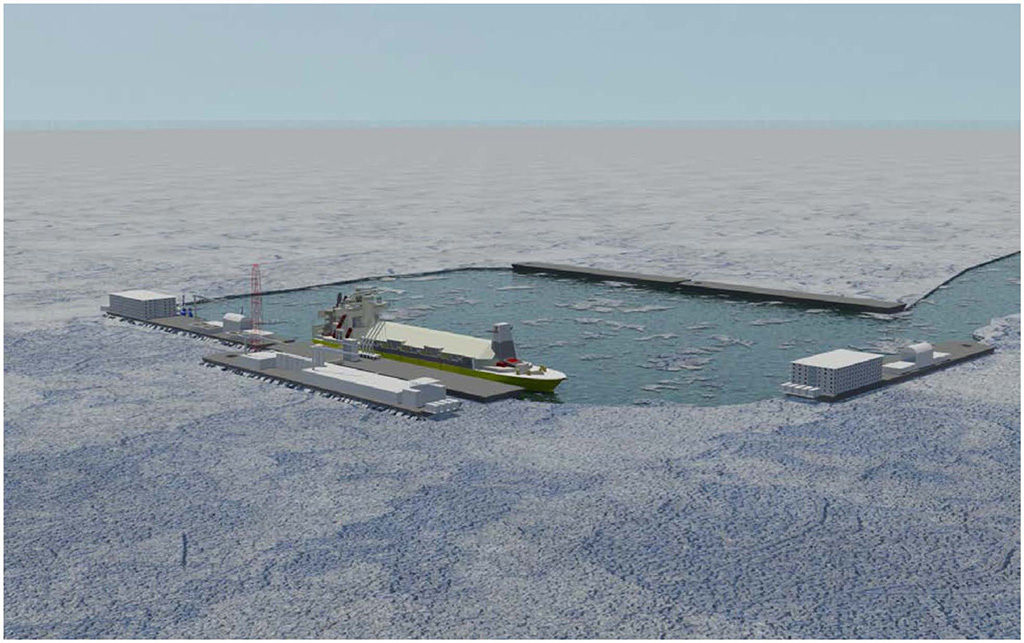 Cost and delivery of long-distance natural gas pipelines to a distant liquefaction facility at a warm-water port has become excessive, and environmental restraints have been increasing. An alternative to this type of facility is an offshore ice-resistant liquid natural gas (LNG) port accommodating a new class of LNG transport vessels. The benefits of a deepwater Arctic marine port are undeniable; the concept would create a safe harbor that could be configured to fit the requirements of any Arctic endeavor.

This paper presents a concept that could provide a cost-effective method for loading and shipping LNG in the Arctic without creating a conventional port with dredged channels and permanent infrastructure, which is not cost-effective and draws criticism from many sources. Considering the shallow near-shore, the port will have to be offshore a considerable distance. To accomplish this, the ice would have to be blocked from interfering with operations and vessel transits.

Vessels would have to be able to transit into and out of the protected port freely and with minimal assistance. In addition, the port should be relocatable and multifunctional and provide a high degree of flexibility in its location.

This design proposes an offshore port capable of loading LNG carriers in a protected environment, located in relatively deep water. The port would be capable of handling large LNG carriers and protecting them from the ice during the loading process. All necessary provisions and replenishment for the vessels will be stored at the port.

GBSs or Caissons. The port would be an arrangement of specially designed ice-stabilization GBSs or caissons that would form an interior safe harbor. The port configuration will consist of multiple caissons supporting the LNG processing equipment as well as operations and maintenance facilities to be used for the offshore terminal. The caissons will also serve as surge tanks for the LNG to be loaded onto the carriers.

The port concept would be configured so that access will be by vessels traveling through the open end of the embayment. The northernmost caisson would block ice movement from the north. It would be equipped as a command and control center with quarters and offices. The southern end is open and faces the beach.

Each project would have its own plan layout. It would be configured to protect the loading operation and to provide safe harbor for other vessels.

Offshore Ice-Hardened Support Vessels. The port can withstand the ice and other environmental loads, but, to operate the port, ice-class port vessels would have to keep the embayment open and control the ice at the entrances.

The LNG carrier vessels would be berthed by a system of ice-breaking assist vessels.

For the concept offshore ice port, an operating cluster of vessels would consist of two docking vessels, two near-port ice-breaking route-clearance vessels, and one heavy ice-breaker for route ice management to open water and to assist with any blockage that the LNG carriers could not handle. The shipping lanes would be maintained by additional ice-class vessels.

LNG Tankers. Initial designs of LNG tankers had light ice capabilities, but designs since have progressed to having year-round capability. The ability to operate on a cost-effective basis in the ice is improving, and operating a year-round port is possible, with minor weather and ice interruptions.

Nothing of this caliber has been erected in the Arctic, and the concept designs are in the early inception stage. Concept designs for an Arctic offshore port and for hydrocarbon-loading have been discussed at length. Most come from an era when ice-loading information was at a premium; therefore, most of them made use of the more conventional method of a dredged port with a conventional dock system. As the ice-loadings on offshore structures became more refined, the idea of structures in ice became more viable.

The ice port concept presented here is a generation ahead of these issues and is designed to new Arctic offshore structures codes.

Each location would have to be slightly modified to accommodate various environmental factors that are particular to that location. The offshore port configuration concept presented here can work well in the Canadian Arctic because the near-shore water is shallow. The waters north of Tuktoyaktuk, Canada, would require extensive dredging to build a usable LNG port. With this scheme, the port can be located at sea and the deeper-draft vessels can have access with minimal cost.

Operation of the port requires several support vessels. These are docking vessels and ice-management vessels for the port and the carrier route. All of these boats will have to be constructed to be the most ice-capable. This is a requirement and not an enhancement. In general, the ice class of these support vessels and the LNG carriers may have to be increased to handle winter operation out of the Beaufort Sea.

Access to land infrastructure can be achieved year round with a combination of marine vessels and the use of ice roads on the surface of the ice sheet. If shallow draft, double-acting, ice-breaking supply vessels are available, the port can be resupplied and connected to the infrastructure on the shore on a 365-day-per-year basis. This capability would overcome most of the drawbacks of operating in the shallow water of the Arctic coast.

LNG storage can be achieved by converting the tanks in the port caissons to storage. Surge to fill the carriers can be provided in this way. The storage would be under the plant or in an adjacent caisson.