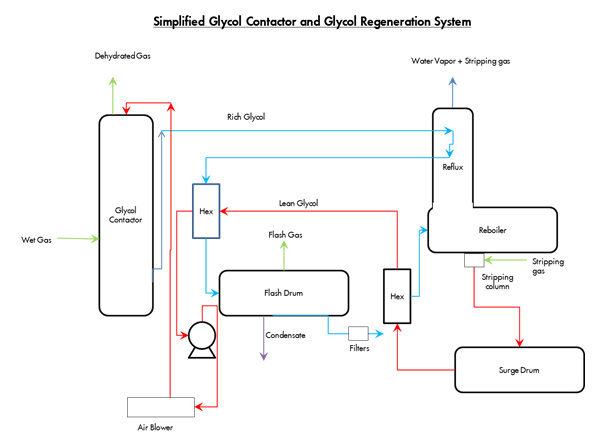 The complete paper discusses the natural-gas-dehydration performance of dehydration units in two different plants using a preinhibited glycol/antifoam/pH adjuster blend vs. neat glycol with periodic injection of antifoam and pH-adjuster inhibitors. The insights made with this new preinhibited-glycol-blend approach present an opportunity for significant reduction in both operating and capital costs for existing and future gas-processing plants as well as a decrease in corrosion rates with prolonged plant life.

The use of triethylene glycol (TEG) to strip gas of its water content in an absorption tower (known as a glycol contactor) has gained prominence in the industry. This is because glycol can be regenerated and recycled back into the contactor, making it less operating-expense (OPEX)-intensive. However, this system is not without its disadvantages. First, regenerated TEG tends to degrade over time, resulting in the formation of organic acids that corrode the pipings and vessels within the process. Second, the presence of condensate in TEG results in foaming, leading to glycol losses and the frequent need to top off the system with fresh TEG. Such losses, in severe cases, defeat the OPEX savings achieved by the regeneration of TEG. Furthermore, injection of pH adjusters to regulate the pH levels above the acidic range often result in severly alkaline glycol, which aggravates foaming and inorganic scale deposition. This is because the pH adjusting process is very sensitive and prone to operational errors of overinjection.

However, with the advent of preinhibited TEG products—preblended with optimal amounts of antifoam, pH buffers, and corrosion inhibitors—OPEX associated with antifoam and pH adjuster application can be reduced, as can capital expenses (CAPEX) associated with designing and installing injection skids for these applications. Expenses associated with glycol losses and ultimately improving the efficiency of the gas dehydration process can be minimized if such preinhibited TEGs perform as intended.

To ascertain and realize the scope of this opportunity, a preinhibited glycol product was tested in two nonassociated-gas (NAG) processing plants in Nigeria.The two plants each contained two gas-dehydration trains (modules) such that while one train employed neat glycol with periodic pH adjuster and antifoam injection, the other employed the preinhibited blend, with both trains running simultaneously. The two facilities were selected on the basis of their history of poor dehydration and glycol-regeneration performance and internal corrosion while using neat glycol.

Glycols are extremely stable to thermal and chemical decomposition, readily available at moderate cost, useful for continuous operation, and are easy to regenerate. In addition, the hydroxyl groups in glycol molecules allow easy association with liquid water molecules because of hydrogen bonding. Such high affinity for water, together with the aforementioned properties, make glycols the prime choice for use as dehydrating agents. Of the four commonly used glycols, TEG has gained global acceptance as the optimal dehydrating agent because of properties including the following:

In a typical gas-dehydration unit, TEG is introduced into a contactor at the top, while gas is introduced at the bottom so that water is stripped off the gas as the two streams flow countercurrently. The contactor is typically retrofitted with an integrated inlet separator, which helps to separate out condensate before the gas enters a structured packing section, where it contacts TEG. Water-enriched TEG (“rich” glycol) exits the contactor, is heated in a heat exchanger, and moves to a flash drum, where entrained gas and condensate are separated. The glycol then flows through another heat exchanger before moving on to a reboiler and distillation column (fitted with a reflux condenser), where water is separated and the glycol is regenerated to approximately 98.5% purity at approximately 198°C (“lean” glycol). Stripping gas in a column is often used to improve the purity of lean glycol to approximately 99.5% as it exits the reboiler and moves into a surge drum, from which it is pumped through a series of heat exchangers and back into the contactor for continuous gas dehydration.  Over time, the perfect system described here loses some integrity because of glycol loss, glycol degradation, and foaming. These phenomena are discussed in detail in the complete paper.

These issues, and the difficulties associated with managing them by means of conventional methods, have debilitated the ability of many gas plants to consistently deliver on their export-gas-quality commitments. For this reason, the opportunities presented by preinhibited glycol are worth investigating.

Of particular interest is the fact that preinhibited glycol contains fixed amounts of inhibitors. Considering the issues surrounding the variation in inhibitor doses required to treat neat glycol on a case-by-case basis, the question arises as to whether preinhibited glycol will be effective under the wide range of conditions and upsets that occur in a live plant. Another pertinent concern is the durability of the inhibitors. For how long will they continue to remain effective until inhibition completely wears off? Questions such as these form the basis upon which the decision to conduct field trials was taken.

Because of cost and operational constraints, only one preinhibited glycol product was used for this study. The trial of this product was carried out in two plants, each with different histories of glycol performance as follows.

Plant A. This was a facility processing approximately 500 MMscf/D. The predominant issue with glycol in this plant was rapid glycol degradation to acidic regions. Pinhole leaks associated with corrosion had occurred more than once. The trial was carried out between October 2015 and September 2016. Preinhibited glycol remained in use after the conclusion of the trial.

Plant B. This was a facility processing approximately 1000 MMscf/D. The predominant issue with glycol in this plant was poor gas dehydration, evinced by high export-gas dewpoint even though most process indicators showed healthy signs. The trial occurred between July 2016 and December 2016. Preinhibited glycol has remained in use since then. For this trial, emphasis was placed on monitoring dewpoint performance.

For both plants, at the start of each trial, one dehydration train was shut down, drained of its glycol content, and refilled using a preinhibited glycol product. Upon completion of the refilling process, the trains were started up and monitoring of key parameters alongside that of the counterpart trains, which contained regular glycol, began. Unfortunately, in Plant A, the control train using neat glycol was shut down soon after startup because of faulty contactor internals, so that comparison could only be made with previous data obtained from the trial train when neat glycol was in use. In addition, because of the shutdown of the neat glycol train, only 50% of the total gas from Plant A was being dehydrated (with preinhibited glycol) so that the final export gas was a commingled mix of 50% dehydrated gas and 50% wet gas. A description of the monitored parameters is provided in the complete paper.

A summary of the results obtained from both trials are described in Tables 1 and 2. For both plants, the monitored parameters were within one standard deviation from the average value over the duration.

Table 1—Summary of Results From Plant A

Table 2—Summary of Results From Plant B

The results of both trials confirm the realizable opportunites associated with the use of preinhibited glycol. The repeatability in performance over the duration of the trial also suggests that preinhibited glycol, despite containing fixed amounts of inhibitors, is robust and durable enough to handle the wide range of conditions and upsets that occur in a live plant. Because preinhibited glycol is made up of predominantly neat glycol with approximately 3 to 5 vol% of inhibitor additives, the results also imply that, were it operationally feasible to perfectly optimize the injection of antifoam and pH adjusters, significantly lower dewpoints and decreased glycol losses could be achieved in conventional systems. However, because doing so is operationally challenging, preinhibited glycol presents a simple, durable, and less-complicated approach to optimizing gas dehydration.

As a result of these trials, the plants have benefitted in the following ways: