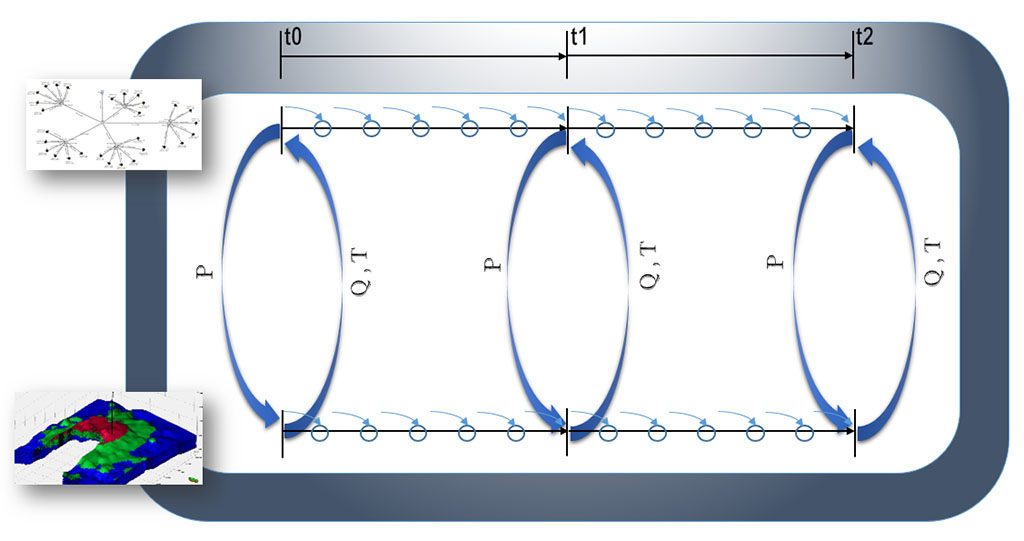 The example presented in the paper focuses on a 29-well greenfield development in which the operator wanted to evaluate tying back the field to an aging facility. The operator determined that most of the repairs on the facility could be resolved within 4 hours. The field was planned to be designed for a 10-hour no-touch time, and the main concern was not related to the direct costs of repairs but rather to the hidden costs of lost and deferred production.

The task was to evaluate, in case of an unplanned shutdown caused by a topside equipment failure, whether it would be possible to start up all 29 wells on this field within a 6-hour window. The window is the time between the completion of the repair and the end of the no-touch time to avoid having to protect the field and incur additional costs and deferred production.

Because starting up a field is a dynamic problem that greatly depends on the reservoir conditions at the time of the startup, it was decided that it was critical to incorporate the reservoir model in this project and conduct a full integrated dynamic simulation that included both the production network and the reservoir model. Also, because the choice of subsea technology can greatly affect the field-layout concept chosen, the decision was made to evaluate different control systems that can potentially help with quick-startup procedures.

Reservoir Model. To capture the startup behavior of the wells, it is critical to begin the evaluation by use of a representative reservoir model. The reservoir model will later be integrated with the dynamic network to provide the accurate rates and pressures during the startup operation. The integrated modeling approach uses the forecasting reservoir model with some modifications made to optimize run time vs. accuracy. This is a critical task in integrated modeling, where the modeler needs to achieve quick run times without sacrificing the accuracy of the results. In terms of the reservoir model, localized grid refinement was used near the wellbores to capture the pressure, temperature, and rate transients during the shutdown and startup operations. Coarse gridding was used between the wells because less accuracy was needed, but it was still important to determine the wells’ interactions.

The sandstone reservoir sits at a depth of 1600 m with 29 production wells. The water depth at the wellhead locations is approximately 1100 m.

Wells and Network. To determine the geometry of the wells and flowlines, multiple reservoir-drainage plans were assessed and the optimal drill-center locations were determined. It was determined that this field will be drilled with five drill centers. The well trajectories were then populated accordingly on the basis of the recently determined wellhead locations and the given reservoir targets. Multiple tieback scenarios (i.e., daisy chain and individual tieback) with seafloor bathymetry were drafted, and the corresponding dynamic-network models that include the wells and the tieback lines were created.

To create the startup procedure, the subsea equipment was determined (i.e., trees, manifolds, and control system). An all-electric system with power available at the manifolds was chosen, providing added benefits to operability and speed. All the valves that affect the startup were identified and sized on the trees and manifolds. The opening time of each of these valves was determined and included in the dynamic network model, represented by stroke times on the valves in the simulation model.

The different tieback scenarios were evaluated. It was clear that to achieve efficient startup, individual tiebacks were needed for each drill center, allowing them to simultaneously start up, which decreases the time needed for startup. In addition, the layout allows all the wells to start up without having any increased backpressure causing them to shutdown. Fig. 1 shows the chosen layout for the field. The equipment design pressure and temperature limits were also evaluated and taken into account within the model (10,000 psi and 0–250°F).

After identifying the layout, the constraints, and the key elements that need to be simulated, it was critical to create a startup procedure that could be modeled in the integrated dynamic model to be evaluated. On the basis of the power available at the manifold, a procedure was chosen that is described in detail in the complete paper:

This procedure allows each drill center to start up independently of the other. The goal of this procedure is to achieve the fastest possible startup time while operating safely and without causing any flow-assurance problems.

To better monitor the flow-assurance problems that might occur during a startup operation, the subsea production network was built in a dynamic multiphase flow simulator. The wells, valves, manifolds, tieback lines, and separator were included in the model. In addition, the startup procedure and the MEG injection rules were added to the model by use of controllers.

Integrated Dynamic Model. The integrated dynamic model uses an integrated asset modeler (IAM), which connects the reservoir model to the dynamic network model. The IAM controls the exchange of boundary conditions between the models as well as the frequency of the exchange.

To have a successful integrated dynamic model, some care should be taken when creating the network and reservoir models. There will always be a tradeoff between accuracy and simulation speed. This is dictated by the gridding applied to the reservoir model as well as the number of pipe sections or segments created in the network model. In addition, the speed and accuracy greatly depend on the frequency at which these models exchange boundary conditions. It was evaluated that a frequency of 5–10 seconds is optimal in this case to achieve a factor of 5 in simulation speed over real time without losing accuracy.

In addition, the thermodynamics across the boundaries must be consistent in both the network and reservoir model. Hence, it is advised to generate the fluids for these models from the same pressure/volume/temperature package, making sure all parameters are consistent. Failure to do so might result in instabilities in the integrated model. Also, it is critical to ensure that both models are consistent on both ends in terms of completion depths and temperature gradients to avoid any inconsistencies.

To run the startup scenario, it is critical to initiate the simulation from the correct initial conditions. Therefore, an emergency-shutdown scenario was first run by use of the integrated model approach, and after 4 hours of simulation, restart files were created for both the network and the reservoir model. These restart files contain the correct pressure, temperature, and flow distributions along the reservoir and the network, and were used to initiate the startup scenario.

It is important to note that artificial-lift selection and economics were not within the scope of this project and hence were not evaluated. Incorporating both artificial lift and economics could have possibly led the authors to choose a different network layout that could be more cost-efficient or could enable greater production.

After running the integrated dynamic model, it was clear that the final chosen layout shown in Fig. 1 could achieve the required startup time for the full field without breaching any equipment constraints or causing any flow-assurance problems.

Traditionally, integrated dynamic modeling has been performed on a well-by-well basis. In this project, it was performed on a large subsea field by integrating the reservoir model, a dynamic network model, and equipment constraints to determine an efficient startup. The integrated dynamic modeling approach gives the possibility to evaluate the startup procedure at different times throughout the life of the field to design the optimal subsea layout accordingly. An optimized field layout combined with an all-electrical control system helped decrease the startup time and achieve a safe startup without creating any flow-assurance problems.