Hydrate-Induced Vibration in an Offshore Pipeline 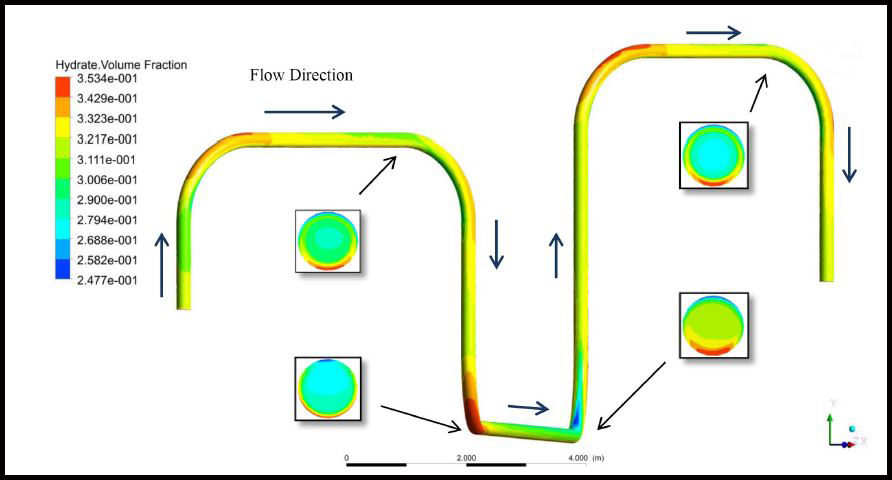 The objective of this study is the numerical simulation of hydrate-flow-induced vibration and stress analysis of an M-shaped jumper of a subsea oil and gas pipeline. These objective is divided into the following tasks:

The CFD simulation is coupled with a finite-element-analysis (FEA) -based program, and sensitivity analysis is performed using different pipeline construction materials.

In this study, a straight pipeline was used first for validation. Later, an M-shaped jumper is simulated as an offshore pipeline. The computational grid of the M-shaped jumper consisted of 180,720 hexahedral nodes.

The M-shaped jumper used for the simulation has a diameter of 25 cm with a suspended span of 30 m and six sharp elbows. The jumper is assumed to be fixed at the two ends under the water, and gravity works in the downward direction. The numerical simulations were performed with commercially available CFD software. The software uses an element-based finite-volume method to discretize the computational domain with fine meshing. The mesh creates finite volumes, which are used to solve the mass, momentum, and energy equations. Discretization helps linearize a large system of nonlinear algebraic conservation and transport equations. The hydrate slurry flow inside the jumpers is governed by 3D incompressible Navier-Stokes equations. The density and viscosity of the hydrate-carrier phase used in this study were 1000 kg/m3 and 0.001 Pa·s, respectively. The hydrate phase density was 1138 kg/m3. The hydrate was assumed to be formed already, and the mean particle size of the hydrate was 70 μm. A Eulerian-Eulerian approach was used for the multiphase modeling. The flow was considered turbulent and isothermal, with aggregation and breakage of the hydrate particles in the turbulent pipeline flow and no interphase mass transfer. These physical processes are modeled as a set of partial differential equations with boundary conditions. The theoretical framework of the CFD simulation is based on the solution of conservation equations—namely, mass, energy, and momentum conservations.

A refined tetrahedral unstructured mesh was used in the simulation. The turbulent eddies near the wall are very small, and a special consideration was required to obtain good results in the CFD simulation. It was recommended that the mesh near the wall be refined enough to resolve the small turbulent eddies. A dimensionless quantity was used to check the near-wall mesh treatment. For a standard wall function, the value of the dimensionless quantity for the first cell should be within the range of 30 to 150. In this study, the near-wall treatment was performed to ensure that it is in the acceptable region.

After the CFD analysis of the flow phenomenon of hydrate transport in a turbulent flow through subsea rigid jumpers was studied, the internal-flow data of the pipeline was exported to the FEA program and a fluid/structure interaction study was conducted.

If hydrate volume fraction increases from 15 to 37%, deformation in the jumper increases from 0.022 to 0.35 m. The deformation may cause a rapture or structural failure in the flow line and may lead to a catastrophic event. Jumper failure occurs because of pressure buildup at the pipe walls caused by high flow rates and high hydrate volume fractions.

Sensitivity analysis of flow parameters such as hydrate volume fraction and flow velocity provides more insight into hydrate flow through the complex geometry of the jumper. Results show that the total deformation on the jumper increases with increasing hydrate volume fraction. They also show that the minimum deformation of the pipeline occurs at a very low fluid velocity. Identifying the regions of maximum stress and deformation for various flow conditions will help operators take preventive action against structural failure.