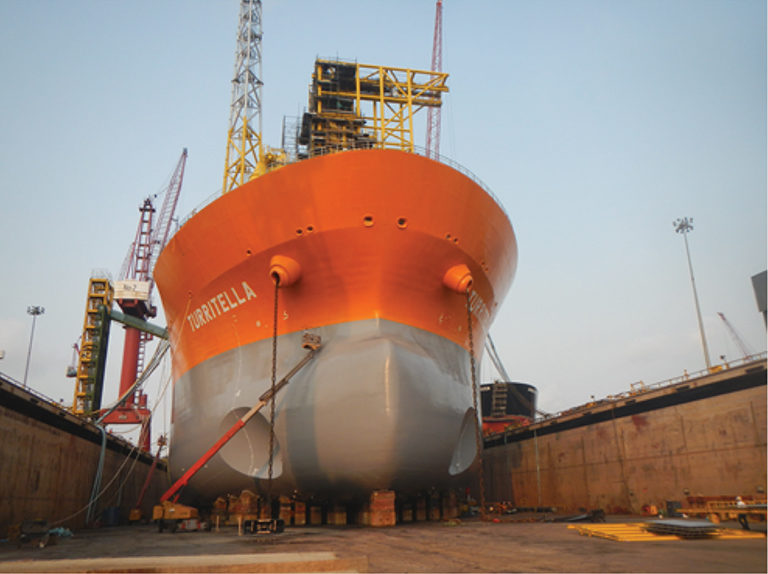 The Turritella FPSO is the deepest floating production system in the world. Source: OTC 27663.

Shell and SBM Offshore will be presented the OTC Distinguished Achievement Award in recognition of the successful development of the world’s deepest oil and gas project, the Gulf of Mexico Stones field, using the Turritella FPSO, an industry-first pairing of a steel lazy wave riser system with the largest disconnectable buoy turret mooring system, and an artificial lift system designed for 15,000 psi.

Shell E and P Offshore Services BV signaled its intent to exercise a contractual right to purchase the FPSO from SBM Offshore in July 2017. In January, the deal was closed for $1 billion and Shell took over full operatorship of Turritella.

Shell’s Stones is about 200 miles off Louisiana in the Walker Ridge area at 9,500 ft water depth. Turritella is the deepest FPSO development in the world and has a turret with a disconnectable buoy carrying mooring lines and risers from the well system, which allows the vessel to weathervane in normal conditions and disconnects from the FPSO when needed, as when a hurricane is approaching. The FPSO connects to subsea infrastructure which produces oil and gas from reservoirs around 26,500 ft below sea level, and 17,000 ft below the mud line.

The Turritella has a daily production capacity of approximately 60,000 bbl of oil and 15 MMcf of natural gas. Shell identifies deepwater resources as a growth priority with global production expected to reach more than 900,000 BOE/D by the early 2020s.

Together, Shell and SBM also completed a successful safety milestone when the Stones FPSO project logged more than 18 million work hours in the construction phase with only one lost-time incident.

A platform connecting to the Garden Banks pipeline was undamaged by Hurricane Laura, but Enbridge declared force majeure after inspecting the facilities.

For the seventh straight year, the regulatory body has found offshore operations continue to improve based on an efficiency model developed in partnership with the SPE.