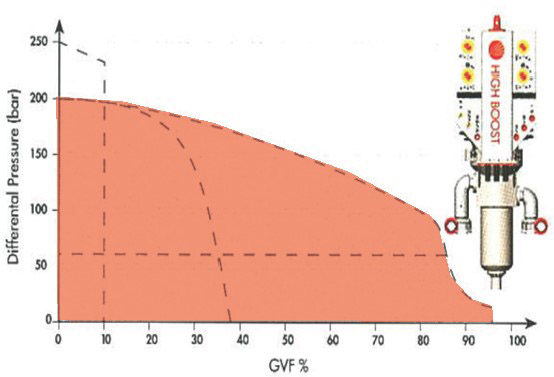 The Girassol, Jasmin, and Rosa fields were discovered in Block 17 in the late 1990s and early 2000s, 210 km northwest of Luanda, Angola, in water depths of approximately 1400 m.

The Rosa Field started production in 2007 using a subsea tieback to the Girassol floating, production, storage, and offloading (FPSO) vessel. In anticipation of a plateau decline, the operator studied opportunities to develop marginal resources and improve recovery of mature fields. The Rosa Field emerged as one of the targets for improved oil recovery. It is the farthest from the Girassol FPSO vessel, using up to 20 km of subsea production flowlines. Consequently, the field sees a significant subsea-network-pressure drop, which, combined with an increase in water cut and constraints in topside gas compressor capacity, accelerated the production decline. By removing these limitations, oil production could be increased.

A study was conducted to identify the most promising subsea processing solution to reduce backpressure at the wells and, hence, the required wellhead flowing pressure.

Several research and development initiatives already had been launched for the qualification of technical solutions that, along with accumulated deepwater experience, formed a springboard for the evaluation of subsea processing solutions. The following already-proven technologies were screened:

These solutions were compared in terms of technical maturity, complexity, and operability of each system.

Subsea MPPs. The MPP station would be installed inline at one of the subsea manifolds on a production loop. The MPP option was intuitively the simplest way to lower backpressure at the wellhead and reduce gas-lift requirements in the risers, at least under steady-state conditions.

Gas/Liquid separation. This subsea separation system would be installed inline at one of the subsea manifolds, with the liquids routed with a pump through the existing production loop while gas is routed with a new line to the FPSO vessel.

One of the drivers for installing subsea gas/liquid separation units is to be able to depressurize the flowline system below hydrate-formation pressure during a shutdown. This removes the need for dead-oil-flushing systems and expensive pipe-in-pipe technology for flowline insulation.

The Rosa Field was different because existing production lines (pipe in pipe) are already designed to provide sufficient cooldown time in the case of a shutdown. Thus, the only benefit of the gas/liquid separation system compared with an MPP system was the possibility of using liquid pumps with higher pressure differentials, allowing a further reduction of wellhead pressure.

Three-phase separation. This subsea separation system would be installed inline at one of the subsea manifolds, with the gas routed to one leg of the production loop while the oil is routed to the other loop leg. The produced water is treated and then pumped to the existing water injection system.

On one hand, the MPP option was confirmed by a screening study as the simplest way to lower backpressure at the wellhead. On the other hand, the limitations of field-proven MPP technology (i.e., reduced pressure differential and narrow operating range) would constrain the optimization of production from the Rosa Field.

In early 2008, a joint-industry project performed the first run with the high-boosting MPP prototype with encouraging results, leading to an estimation that this new technology should be available to be considered for engineering procurement and construction tender once complementary testing had been concluded.

In 2009, the complementary testing of rotodynamic behavior over long durations, with high-viscosity fluids, and with worn-out pistons was conducted. During the tests, the pump showed rotodynamic instability for some running conditions with viscous fluid. This complex problem of rotor instability was solved in January 2011, after almost 2 years of thorough troubleshooting. The solution came from the idea of using a field-proven technique that had been used on compressor balance pistons to improve rotor stability.

On 22 April 2011, the high-boosting MPP technology was ready for industrial application in line with field development planning and only few months before project sanction.