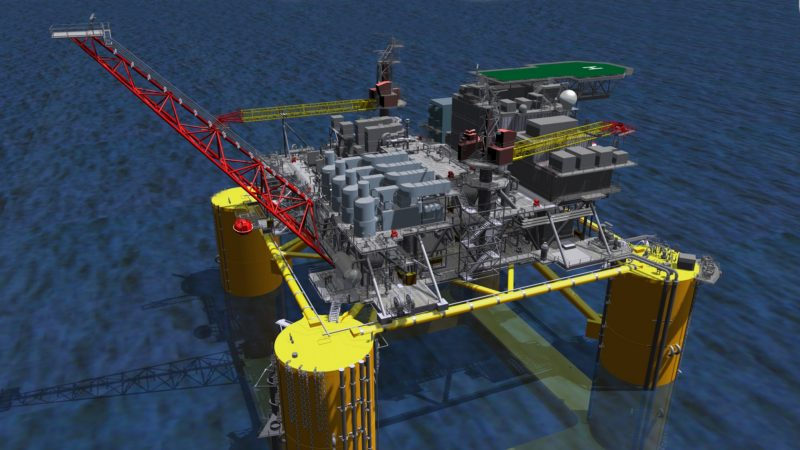 Offshore installation activities for Shell’s Vito development, seen here in a 3D rendering, are scheduled for 2020 and 2021. Source: Shell.

Two months after sanctioning the Vito deepwater development in the US Gulf of Mexico (GOM), Shell has made several advancements toward its eventual 2021 startup. In May, the company agreed on an installation contract with Jumbo and to a deal with Sembcorp Marine to build the hull, topsides, and living quarters of the semisubmersible floating production unit (FPU). This month, the contracting continued with a pair of new deals.

Subsea 7 was awarded a contract covering project management, engineering, procurement, installation, and pull-in of two 12-in. infield production flowlines with 10-in. steel catenary risers (SCRs), a gas lift flowline and SCR, and the umbilical system. The contract is estimated to be worth between $50 million and $150 million. And last week, Shell announced a deal with GATE Energy for facility commissioning of the development. The scope of the contract includes commissioning planning, onshore commissioning execution, offshore commissioning services, and ready-for-startup services.

Project management and engineering will take place in Houston, and Subsea 7’s Glasgow-based Pipeline Group will provide assistance. Offshore installation activities are scheduled for 2020 and 2021.

Vito will be Shell’s 11th deepwater host in the GOM. Located in more than 4,000 ft water depth over four blocks in the Mississippi Canyon area, approximately 150 miles southeast of New Orleans, the development will consist of eight subsea wells with 18,000-ft in-well gas lift. Vito is expected to reach peak production of around 100,000 BOE/D, and it has an estimated recoverable resources of 300 million BOE.

Shell owns a 63.11% interest in Vito and will operate the development upon startup. Equinor holds the remaining ownership interest. Shell began a redesign of the project in 2015, shortly after the oil price downturn, to reduce cost estimates. The company said it ultimately lowered costs by more than 70% from the original concept primarily by simplifying the design and working in collaboration with a number of vendors in well design and completions, subsea, contracting, and topsides design.

The simplified design will give Shell an estimated breakeven price at less than $35/BOE, considerably lower than its $50/BOE-breakeven price for the deepwater Appomattox project in the Norphlet formation of the GOM. Appomattox was sanctioned in July 2015 and startup on that project is expected in 2020.

The Norwegian company completed what it describes as the world’s first logistics operation with a drone to an offshore installation.