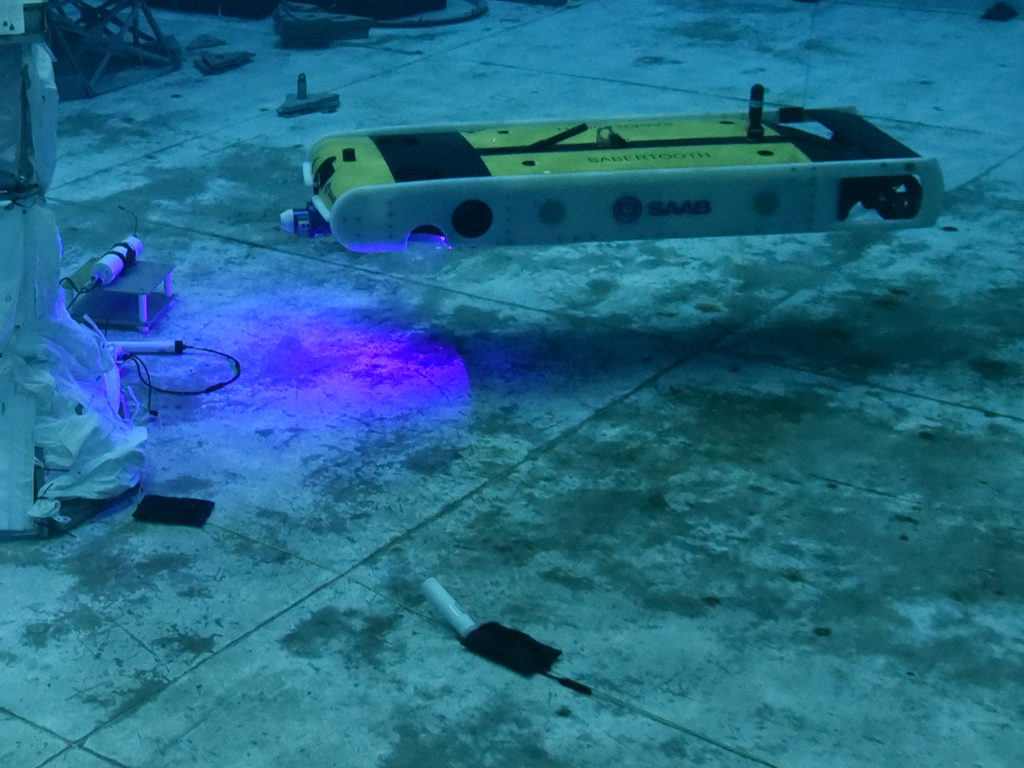 Subsea inspection, maintenance, and repair (IMR) services today are largely a deployed, vessel-based market with approximately 60% of its $3-billion market going to vessel spend. Remotely operated vehicles (ROVs) make up the largest market share in the sector, and have been in the market for decades, but they may not be the optimal solution for operators looking to keep costs down as they recover from the oil price downturn.

Neil Herbst, subsea IMR program manager at Schlumberger, said the cost of deployment is an issue with ROVs. Prior to the downturn, a single-day rate for an ROV could run as much as $100,000. That figure contracted after the downturn, but he said it has started to rise in recent months. The support crew needed to run an ROV-based inspection may be cost-inefficient as well, and the operation of an ROV system may not be possible in certain weather conditions.

While ROV technology has improved incrementally over the years, Herbst said the majority of systems require a dedicated crew capable of performing the subsea tasks required by operators. Deployments require extensive ship-based crews dedicated to the operation of maintaining that vessel, and its operation is contingent on weather, so there may be times of the year when ocean conditions make ROV operation impossible.

“You look at ROVs and their development costs, and I’m not saying they’re low, but the ROVs had larger development costs when they were originally developed 40 years ago,” Herbst said during a panel discussion held at the inaugural SPE ENGenious Conference in Aberdeen in September. “Now there isn’t a lot of money going into changing the technologies there. They are very expensive to maintain and operate, especially with the people that are required to do that.”

Reducing the amount of crew and vessel days is a goal for companies in the IMR space, but what gets those companies closer to that goal? James Jamieson, business development manager at iTech Services, said continuing to identify incremental savings is not sustainable, and that a more innovative approach is required.

“We have to make a significant change in the way we do things, primarily in reducing the number of days that we have a vessel at sea and monitoring the risk in that as well,” Jamieson said at the ENGenious panel. “We can’t reduce capabilities without introducing risk. We have to have the same service while limiting the offshore days as much as we can. That’s where we can see savings.”

Autonomous underwater vehicles (AUVs) are obvious solution to reducing man-hours in subsea IMR, but their entry into the market is not necessarily cut-and-dried. Jamieson said industry can perform fully autonomous inspections today, but the bulk of IMR work is in maintenance and repair, which often means light or heavy intervention that requires human interaction. Herbst presented this issue as a question of cost vs. trust: Do operators trust the technology enough to use it over a legacy technology that still affords them a sizeable measure of control in the operation?

Ross Doak, data centric systems engineer at Shell, said that from an operator perspective, the question of autonomy is one of value. An autonomous system, he said, is not valuable in and of itself. Operators are asking for a service, and that service can be provided in a number of ways.

“Robots are really all about data acquisition, and the problem that I see with subsea when it relates to drones is that all of the computing power is pushed to the edge. It’s all on the device itself, which means that in terms of data storage, that has a premium on the design. When you look at what robotics are going to do, especially on the inspection market, you have to look at the reduction in vessel days being enabled by an automated system. I think we have to look at it in two forms: What kind of inspection services do we want, and how does that fit the business plan?”

To bridge the gap between AUVs and ROVs, OneSubsea, a Schlumberger company, is developing its uROV inspection platform, which merges Schlumberger technologies with Saab Sabertooth vehicles. Instead of having a joystick control, pilot-operated ROV, or something fully autonomous like the majority of commercially available AUVs, the system would allow for supervised autonomy. The system comes equipped with multiple sensor devices, including LiDAR, a multibeam echosounder, and side scan sonar.

Herbst said uROV’s capabilities are similar to what operators currently do with other surface applications or autonomous systems. They could be supported by subsea architecture—such as a subsea “garage” that recharges the vehicle and provides a platform for data transmission—in a greenfield environment. In a brownfield environment, it can be paired with an autonomous surface vessel for positioning, range, and communication with an onshore operational center.

“In order to really break into the market and really make a good business case with these, operators have to trust these autonomous systems,” Herbst said. “Today they don’t necessarily trust them to get into their very expensive equipment, to get near their $300-million subsea infrastructure, to get near their wells. A good way to bridge that trust is to bring that supervisor back in and then build the autonomous technologies onto that supervisor so that, eventually, 10 years down the road, maybe we do have a fully autonomous system.”

The figure below illustrates the concept of supervised autonomy. A vehicle inspects a subsea structure from close range (in the case of uROV, a range of 1–3 m) and transmits data from that inspection through a gateway (either surface or subsea) to a person in the loop. That person can make decisions on whether to perform heavy or light intervention on a structure.

Jamieson said person-in-the-loop control is necessary for maintenance and repair operations for much of the same reasons as Herbst—autonomous systems are not at the point where operators can rely on them to make decisions on fixing a structure—but it still provides significant value.

“This gives us extra capability because, all of a sudden, all the tools we use in a day-to-day office environment can be applied to underwater operations, so we are no longer running at a tempo for an offshore job that meets the demands of the vessel, which is the expensive part. We can actually do the tasks to support the best economic and optimal operational requirements for the field. We may want to do something today, or we may want to do it next week. We don’t have to drive it into the vessel schedule all the time.”

Herbst said the value of supervised autonomy comes in reducing the amount of crew needed to pilot a vessel. OneSubsea’s goal with uROV, he said, is to get near equipment and inspect it without the need for the support required by a traditional vessel.

“It’s really about removing that tether, having a much lower cost of the vessel up top, and having a lot less crew,” Herbst said. “The way you want to do that is to put the person in the loop. You’re not going to be able to pilot the vehicle due to the latency or the bandwidth, but what we want to do is have the proper mission planner have the autonomy built in the vehicle and have the operator sitting in the loop, understanding what the vehicle is doing, and being able to change things on the fly with that telemetry to make sure the data you’re collecting are of high value.”

Jamieson and Herbst each discussed how communication was a key enabler for supervised autonomy. Jamieson said that the technology would not be possible without improvements in wireless systems over the past decade, including the availability of 4G communications offshore, which allows for easier remote control operations.

“If this wasn’t there, we wouldn’t be in this position,” Jamieson said. “That’s a step that’s come in that’s made a difference for us. Just general networking, go back and look 15 years ago. We’ve come a huge way with networks that work. Wi-Fi is really solid, it’s used every day, it’s run-of-the-mill, and we can start using that in a more effective way for the application of underwater equipment.”

Still, despite the improvements in network strength in recent years, communication through water remains a challenge for supervised autonomy, as developers seek to improve the efficiencies in these systems.

OneSubsea chose acoustic telemetry for uROV over electromagnetic and optical communications because of its range. The company is using adaptive algorithms to expand its bandwidth and potentially filter out noise from the subsea environment, and is working on machine vision capabilities that allow its systems to identify potential faults in a pipeline. This information could be fed into a neural network, with the goal of training that network to identify other issues.

Testing on uROV with the Woods Hole Oceanographic Institution showed the system could transmit 100 kilobits/sec [equal to 1,000 bits/sec] across 1 km of water, which enables it to send video data. Herbst said adding video capabilities is important to get operators on board with supervised autonomy.

“This is a key for the pilot today,” Herbst said. “They see the video, they know what they’re doing, and they can operate. You bring that video back into the operation, you can bridge that gap and get more of an ROV experience. Once you have the video, you send data feeds back to the vehicle, transmissions, and that’s where you really have the supervised autonomy on these systems.”