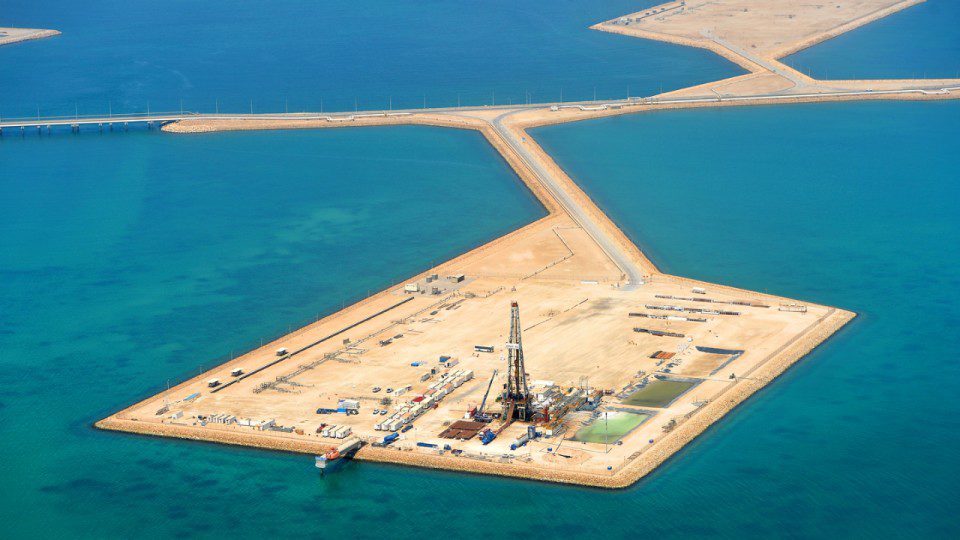 Saudi Aramco
A drilling rig at one of Manifa's causeway islands.

Saudi Aramco’s unique and ambitious Manifa offshore project is the winner of the 2019 International Petroleum Technology Conference’s (IPTC) Excellence in Project Integration Award. The award was announced at the kickoff of this year’s IPTC which is being held in Beijing, China. It serves as an annual highlight of the conference and is eligible for so-called megaprojects involving more than USD 500 million in capital.

Manifa is found off the northeast coast of Saudi Arabia and represents one of the world’s largest offshore developments. There are six large reservoirs stacked atop each other, with the longest of these being about 25 miles long (40 km).

To develop these reservoirs and achieve a production capacity of about 900,000 B/D, Aramco faced a choice of dredging channels to allow jackup rigs to do the drilling, which would have disrupted the local marine environment.

With this consequence in mind, the national oil company opted for a more complex plan that involved building 27 drilling islands connected by about 25 miles (41 km) of causeways, some which could be removed after the drilling infrastructure was installed.

Saudi Aramco has lauded Manifa as one of the world’s largest engineering projects, noting that the construction phase alone required more than 4 million man-hours to complete. The company also said it has successfully overcome the environmental challenge of extracting oil and gas from a sensitive area where shrimping and fishing represent key components of the local economy.

Subsurface challenges included dealing with a layer of heavy tar that sits above the lighter hydrocarbon targets. With extended-reach drilling and subsurface imaging technologies, engineers were able to strategically place water injection wells above the heavy tar to help maintain reservoir pressure.

The two other finalist for this year’s award were Total’s Moho Nord project offshore the Republic of Congo and Shell’s Malikai tension-leg platform (TLP) located offshore Malaysia. Both of these projects represent the shifting focus of the oil and gas industry toward lowering the capital costs associated with offshore production through ingenuity and advanced technologies.

A major goal of the Malikai TLP project, the first of its kind for Malaysia, was to take Shell’s experience with operating TLPs in the US Gulf of Mexico and build a smaller and lighter yet no less capable facility. The facility met this aim in part by taking advantage of a subsea tieback to an existing platform, which meant that some of the processing systems could be eliminated. The facility also used a new riser technology enabling the use of a single riser for both drilling and production. Shell also placed drilling support equipment, cementing units, fluid tanks, and materials, onto service vessels, further reducing the size and weight of the TLP.

Moho Nord is a 17-well project that is using groundbreaking subsea technology and a floating production unit to support a peak capacity of 100,000 B/D. The processed crude is exported to an onshore facility via a subsea pipeline. Total has implemented a program to reduce the environmental impact of the project that includes a zero-routine flaring target and all-electric systems to provide better energy efficiency. Subsea multiphase pumps, a relatively new technology, have played a critical role in minimizing the size and complexity of the floating facilities. First oil on this project, which represents the Congo’s largest upstream project ever, was achieved in 2017.