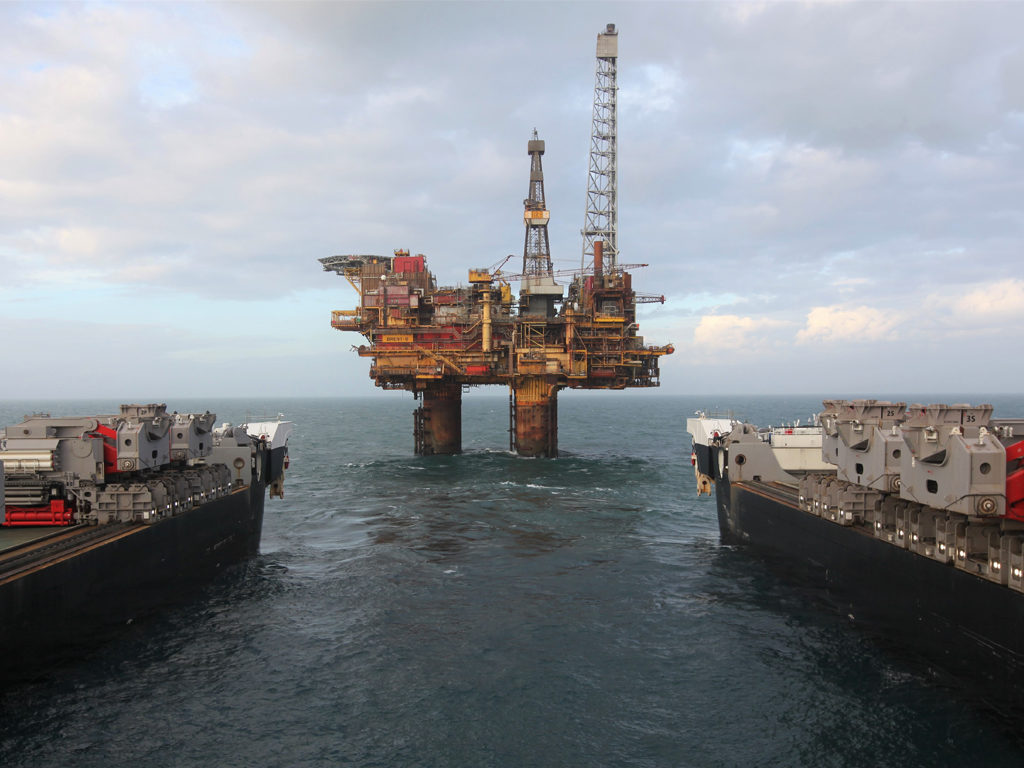 Allseas
The vessel Pioneering Spirit removes the 25,000-ton Bravo platform from the Brent field in the UK North Sea.

Allseas’ Pioneering Spirit has completed its second platform topsides removal in the North Sea in the last week, as the heavy lift and pipelay vessel removed the 25,000-ton Brent Bravo topsides. Allseas said in a statement that the operation took approximately four hours, from positioning the vessel around the platform to the moment of the lift.

Located approximately 115.5 mi off the northeast coast of the Shetland Islands, Brent Bravo was comprised of a topsides structure supported by three 39-ft diameter steel-reinforced concrete legs standing in 459 ft of water. Cuts between the topsides and supporting legs were made during the final months of platform preparations. Until the lift, the structure was held in place by purpose-built shear restraints that prevented lateral movement. The concrete legs remain in situ, capped with concrete covers fitted by one of the vessel’s cranes. A solar-powered navigational aid was also installed on top of one of the capped legs.

Upon reaching a nearshore location off the coast of Hartlepool, the topsides will be transferred to Allseas’ cargo barge Iron Lady, after which it will be towed up the Seaton Channel and load-in to the quay at Able UK’s yard in Teesside for dismantling.

The Brent field started production in 1976. At its peak in 1982, the four platforms in the field were producing more than 500,000 BOPD. The field has produced approximately 3 billion boe since 1976. Shell announced its plans to decommission parts of the field in 2015.

Last Thursday (13 June), Pioneering Spirit removed the 3,800-ton topsides from the decommissioned QP accommodation platform at Aker BP’s Valhall complex in the Norwegian North Sea. Since becoming operational in 2016, the vessel has lifted more than 130,000 tons of topsides weight, including the 24,200-ton Brent Delta topsides in April 2017.