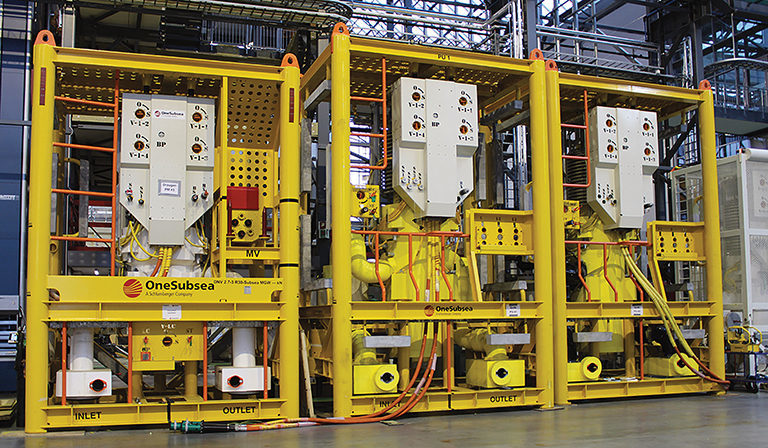 The first subsea multiphase boosting system was installed in 1994. Since then, it has grown into a technology with a global track record. This paper is aimed at identifying potentially significant hidden value of the technology, or aspects thereof that have not received adequate attention during the field-development decision-making process. The authors demonstrate that a more-complete and -integrated assessment approach can reveal this additional value.

The effect of boosting on increased recovery is realized through lowering of the wellhead, bottomhole, or reservoir pressure at which hydrocarbons can be produced economically. This translates into a higher degree of reservoir depletion; more-efficient drainage; and, to a certain extent, greater volumes produced.

A review of field-development projects over the past 30 years for cases in which boosting was evaluated but not chosen revealed that many had used fixed production profiles or decline curves that were developed originally for either natural flow or gas-lifted flow (i.e., with a fixed total producible volume). These approaches do not permit quantification of improved recovery. Another observation is that these shortcuts to artificial-lift evaluation in the early project development phase tend to be carried through the subsequent decision gates of a project without being challenged.

Another aspect of the technology that is often neglected is the fact that the actual cost of the additional barrels of oil enabled by subsea multiphase boosting can be significantly lower compared with the cost of a barrel of oil from regular field development. Furthermore, for larger fields with higher recoverable volumes, or a higher recovery factor, the full-cycle capital expenditure (CAPEX) may be reduced to less than $5/bbl.

Accelerated Production. The financial effect of accelerated production is a less-used evaluation criterion with regard to subsea multiphase boosting. There are reports in the literature of online flow-rate increases of 20 to 100%, with this early revenue leading to improved net present value, internal rate of return, reduced payback time, and lower break-even price—all factors that are often not considered.

In addition to the financial gains of early higher flow rates, the accelerated production will also reduce the time needed to recover the producible volume and, thus, will reduce the required lifetime of the field. A small four-subsea-well tieback system may have an operating expense (OPEX) of $10–50 million/year. Shaving years from the end of production may add significant value at the time of final investment decision, and also may potentially free host production capacity that can be used to process more-profitable assets.

A three-well greenfield case study presented in the complete paper indicates an increased discounted cash flow of $180 million resulting from the financial value of early revenue, and another $190 million resulting from the OPEX savings, mainly from shortening field life by 3 years. The complete paper also includes a brownfield case study that reflects a range of benefits from the use of the technology.

Flow Assurance and Chemical Injection. Increasing the fluid temperature along the flowline may bring several advantages in terms of hydrate and wax management, including the following:

Subsea Umbilical, Riser, and Flowline (SURF) and Subsea-Production-System (SPS) Optimization. Subsea multiphase boosting provides the energy to overcome the resistance from the pipeline and the riser and may influence the general subsea-field-architecture design and cost significantly. An available differential pressure of up to 290 bar allows higher deliverability for flowlines with smaller internal diameter and lower cost, and the potential fluid temperature increase of 30℃ allows a reduction in the insulation requirement. In addition, higher flow rates and smaller pipelines mean shorter transition times and less time to cool down, which, up to a point, further increases the system temperature.

Efficient Reservoir and Production Management. As production progresses, different wells producing to the same manifold and pipeline will have different backpressures, either because of different reservoir pressures or differences in water cut and gas-volume fractions. The weaker, but still economical, wells may not be able, or be allowed to, produce, because this would require the production from the stronger and more-profitable wells to be choked back. Subsea boosting lowers pressures downstream of the chokes, allowing the weaker wells to maintain production while the stronger wells can maintain the same production rates.

After a production-system shutdown, starting up weaker wells may be challenging because of liquid buildup in vertical sections (static pressure losses), potentially leading to permanent and premature shut-in. Enabling co-production of wells with significantly different pressure may also influence the total number of wells required.

Enabling Production. Generally, subsea boosting is evaluated on the basis of additional recovery. However, in cases such as very long tiebacks, where subsea boosting may be the enabling factor, flowing the required distance without the addition of energy may not be possible. Gas lift may contribute to lifting the fluid out of the well, but may not be successful in efficiently transporting the fluid over a longer distance to the host facility. Gas for in-well gas lift also may not be available because of host constraints, or the gas may cool down the entire system because of cold lift gas in the annulus, in addition to the expansion cooling in the well and pipeline.

Heavy-Oil Production. Subsea multiphase pumps have been qualified for viscosities up to 30,000 cp and have been installed in several heavy-oil fields (Fig. 1). In addition to lowering backpressure, the boosting system also reduces the viscosity of the fluid by increasing the fluid temperature and the shear. This viscosity effect can be as important as the pressure boost in terms of reducing the backpressure and increasing well productivity.

Reduced Environmental Impact. The literature has shown that subsea multiphase boosting may reduce the environmental impact of oilfield operations when compared with alternative methodologies. The replacement of in-well gas lift with subsea multiphase boosting may reduce greenhouse gas emissions and OPEX and may fulfill a high degree of social responsibility associated with the project.

As an example, a 10-well subsea field may consume 20 MW of energy for gas-lift compression alone. Each kWh produced generates, on average, 7.07×10–4 metric tons of greenhouse gas. This suggests an energy savings from replacing in-well gas lift with subsea boosting of close to 88 million kWh/year, corresponding to 64,000 metric tons of greenhouse gases per year. In a case in which electricity is bought at $0.15 per kWh, the electricity savings alone can be more than $13 million per year. In a case in which energy is powered by a turbine generator, the savings in terms of the carbon footprint would be even higher. In addition, there also may be significant savings on taxes in countries with high taxes on greenhouse emissions, such as Norway (approximately $60 per ton of CO2).

Improved Operability. Fields in late-life production can have more unplanned than planned expenditures. With the high reliability of subsea pumps and added operational flexibility, subsea boosting may improve the uptime of the production system in a number of ways, including

Production deferment is one of the major contributors to increased OPEX per barrel during late-life operation. A 1% improvement of uptime in a subsea field producing 10,000 B/D will lead to a reduction in production deferment of approximately $1.8 million per year (assuming an oil price of $50/bbl).

Historical Overview of Boosting-Selection Drivers. A survey was conducted to map the sanction criteria that were used for past subsea-boosting projects and to map which additional values were uncovered later in field life. As mentioned previously, the primary driver for 90% of projects was IOR, with accelerated production at 40% becoming more important in the last couple of years. For 50% of the projects, subsea boosting was considered to be the technology that enabled the development of the field. Although reservoir management and operability were recognized for all projects, the actual financial value was not included in the final investment decisions; it was either seen as difficult to quantify or simply not common practice to include and therefore was neglected. The remaining drivers, such as environmental impact and savings, cost cuts on chemicals, and SURF/SPS cost savings and synergies, were upsides that were not evaluated by the projects.

In summary, a significant portion of the actual value of subsea boosting remains unrealized and unrecognized in past projects, suggesting that out of the more than 3,000 subsea assets in production or in planning stages, there may be significant value yet to be uncovered.

This article, written by JPT Technology Editor Chris Carpenter, contains highlights of paper OTC 29407, “Why Not Boosting? Uncover the True Value of Your Subsea Asset,” by Morten Stenhaug, SPE, Hongkun Dong, and Mads Hjelmeland, Schlumberger OneSubsea, prepared for the 2019 Offshore Technology Conference, Houston, 6–9 May. The paper has not been peer reviewed.