Many of Europe’s small to mid-sized oilfield service (OFS) companies are in danger of becoming bankrupt as COVID-19 has led to a $5-billion year-on-year cut in the market, according to an analysis by Rystad Energy. The hardest hit could be British and Norwegian-based companies, which make up around 20% of Europe’s small to mid-sized service segment.

“This will have a pronounced effect on the European energy service market, which is heavily dependent on its international workforce and an efficient flow of goods and services between nations,” said Audun Martinsen, Rystad Energy’s Head of Oilfield Service Research.

The European service market was expected to stay largely flat this year from the 2019 level of $47 billion in pre-COVID-19 estimates. Now, most of the lost purchases worth around $4.5 billion are expected to hit Norway and Britain in maintenance, modifications and operations (MMO), drilling rigs, and well services.

“Bankruptcies will have to follow as a result, especially for mid- and small-sized suppliers, which in the UK and Norway add up to more than 1,000 companies,” Martinsen said. 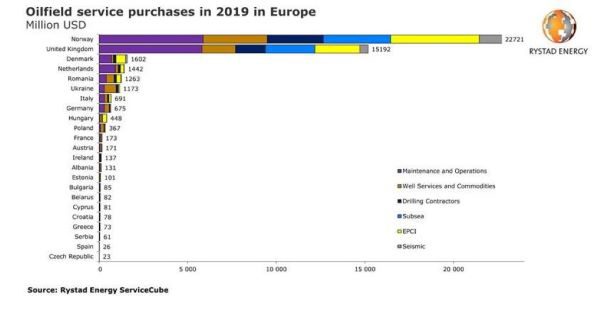 As many as 20%, effectively more than 200 companies, could become insolvent. More companies could be added to this number when the rest of Europe is included.

“For Europe, this crisis is worse than the one that OFS companies experienced in 2015 and 2016 after the oil-price fall,” said Martinsen, adding that a recovery back to 2019 levels is likely to happen from 2024.

The virus has already impacted the bottom line of some oilfield service contractors.

Norway-based Aker Solutions sent out a notice to its 6,000 employees in Norway about likely temporary layoffs in 2020.

UK-based TechnipFMC has postponed its planned separation into two different companies until the markets recover.

Netherlands-based Fugro decided not to proceed with its planned offering of EUR 500 million-senior secured notes due to adverse market conditions.

Other Europe-based OFS have said it’s too early for them to know how their business would be impacted.

UK-based Subsea 7 said it did not have material impact to date from COVID-19, and it was too early to quantify the recent market impacts, the substantial reduction in oil price, and any actions they may take to mitigate risks not already reflected in their existing forecasts.