Although the oil price crash has come at a time when the US Gulf of Mexico (GOM) is leaner, the industry is better prepared to weather the storm compared to the last downturn. Wood Mackenzie outlined five key changes coming to the region.

First, low prices have wiped 30% off the remaining value from the GOM deepwater asset base. Wood Mackenzie changed its long-term Brent oil price assumption from $60/bbl to $50/bbl and updated its 2020 to 2022 forward curve prices.

“Depressed commodity prices have an obvious knock-on effect on corporate investment priorities,” Wood Mackenzie’s Mfon Usoro said. Considering dampened demand as a result of the coronavirus and the initial lack of OPEC agreement, the analyst expects capital expenditures to fall from pre-COVID-19 projections by roughly 35% to $7.4 billion.

A third change is that production could fall for the first time since 2013. A drop in investment caused a change in the production outlook, as new projects, drilling campaigns, and brownfield phases face delays and potential changes of scope.

Wood Mackenzie predicted production of 2.2 million BOED, which it says would have been another production record in the GOM. But, the company’s forecast has fallen by 200,000 BOED.

Although production is forecast to fall, near-term major project start dates have not shifted and recovery is expected in 2021.

The fourth change is that exploration will drop to historic lows this year. Wood Mackenzie had predicted activity to be on par with 2019, the first year that exploration saw an uptick in more than 3 years. 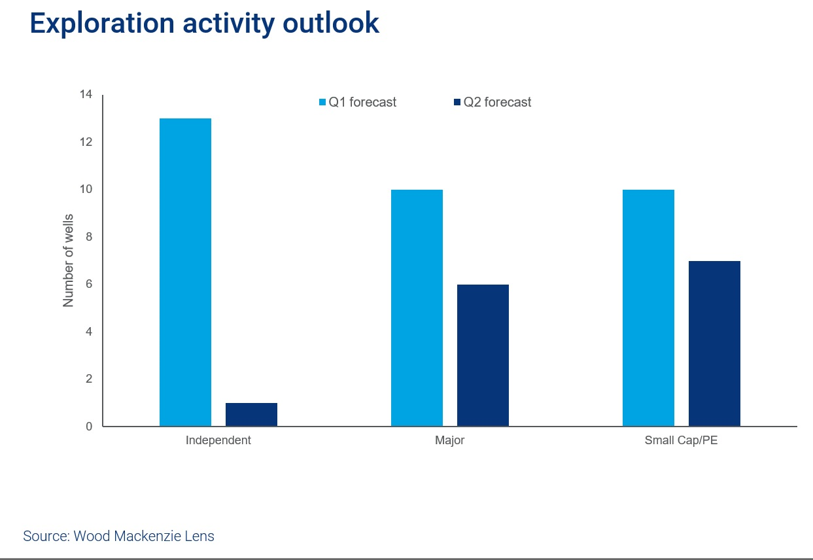 However, now the analyst has cut its exploration forecast by 55% to 15 wells. Usoro said the downward revision was largely dominated by independents, while the majors and small private companies have forged ahead with exploration plans, albeit slightly scaled back.”

Fifth, the analyst predicts that no greenfield projects will be sanctioned in 2020. Subsea tie-back projects may struggle as well.

Now, Wood Mackenzie does not expect any GOM projects to be sanctioned this year. However, unlike the cancellations in the last downturn, project FIDs have simply been deferred, as competitive economics of the pre-FID projects could decline even further with cost deflation.