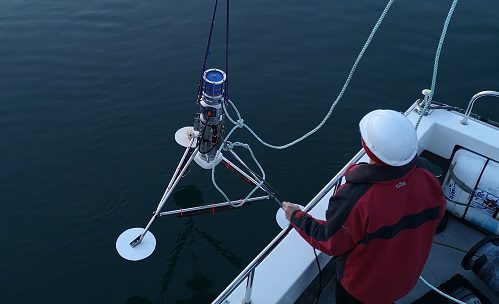 Credit: Sonardyne.
A worker deploys a PIES unit. PIES is an oceanographic instrument for measuring average sound speed in the water column. Equinor announced that it will be hardwiring PIES units into its power and communication infrastructure at its Johan Sverdrup field to provide continuous access to time-lapse seismic data.

PIES instruments are used widely in marine seismic survey operations. However, this will be only the second time that the instruments have been hardwired into topside power and communication infrastructure. The innovative application of the technology will give Equinor instant and continuous access to their data regardless of changing environmental conditions.

Equinor plans to use permanent reservoir monitoring (PRM) technology to increase the amount and quality of data from the Johan Sverdrup reservoir. Processing the data can be complicated by dynamic environmental conditions such as water velocity and tidal height at the time each survey is conducted.

PIES instruments continuously measure the two-way travel time of sound waves propagated through the water column from the seabed to the sea surface. They also measure pressure (depth) at the seabed. This data is then used to calculate a continuous time history of average water velocity and tidal variation throughout the water column. With knowledge of these conditions, the operator can alleviate or eliminate their effect on data processing.

Conventionally, PIES data are collected acoustically by a passing surface vessel, including unmanned surface vessels. Hardwiring the sensors into the topside infrastructure eliminates the need for the vessel, making access to the data instantaneous and continuous. Subsea 7 will install the sensors at water depths of 110–120 ft.

Johan Sverdrup is one of the five largest oil fields on the Norwegian continental shelf, with expected resources of 2.1 billion–3.1 billion BOE. The field will be operated by electrical power generated onshore. Production is scheduled to begin in 2019. Equinor’s partners in the field are Lundin, Maersk, Petoro, and Aker BP.