Katy, Texas, Is Now Home to One of the World’s Fastest Supercomputers 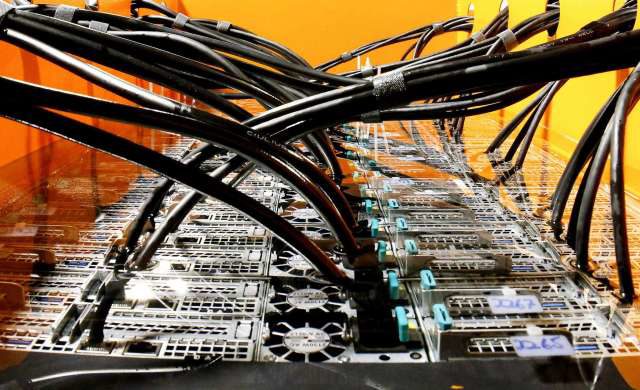 Credit: Elizabeth Conley/Houston Chronicle.
Servers in oil keep cool at the supercomputing installation at Skybox Data Centers on 15 May 15 in Katy, Texas. The supercomputer is made up of tens of thousands of servers, all immersed in chilled oil to cool them.

Katy, Texas, isn’t where you’d normally expect to find one of the fastest supercomputers in the world. But, an Australian company will fire up a digital behemoth in a data center near that Houston suburb that, when it is fleshed out by the end of the year, will have world-class computing power.

Coyly dubbed DUG McCloud, the system takes up a 22,000-ft2 room at the Skybox Data Center on Franz Road in Katy, with another identically sized room in waiting for expansion. When completed by the end of the year, it will be comprised of 40,000 processors. All this hardware is immersed in a chilled, nontoxic oil to keep it cool.

This supercomputer is operated by DownUnder GeoSolutions at Skybox Data Centers in Katy. There are 5,000–6,000 processors submerged in oil for cooling. When it’s finished, there will be 40,000 processors.

DownUnder GeoSolutions, based in Perth, Australia, conducted a global search for the data center to house its creation and settled on Katy, just a few miles from its Houston office. Two big reasons: cheap electricity and fast connectivity.

“We looked at power costs and fiber-optic availability,” said Matthew Lamont, DownUnder’s chief executive and cofounder. “We found this beautiful new facility, and it’s in Houston, where the oil industry lives. It makes sense having it in Houston.”

The 21st century oil and gas industry thrives on hardcore computing power, crunching data derived from seismic testing to find oil deep in the ground and below the sea. Supercomputers speed up the process of analyzing and visualizing that data, and the faster they are, the better. DownUnder declined to disclose the names of any customers.