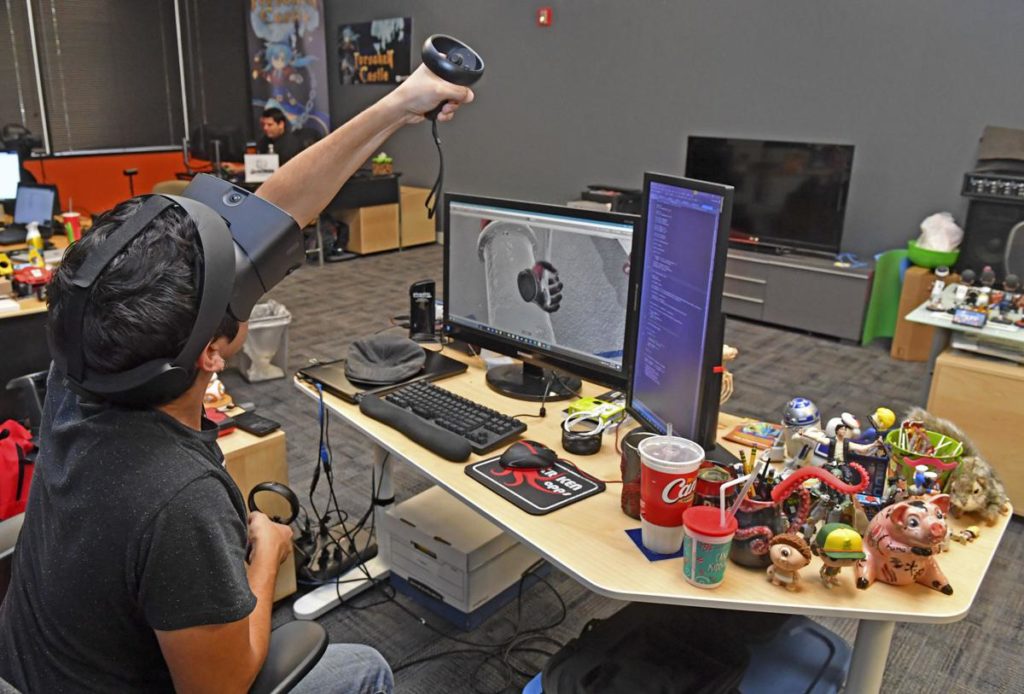 Credit: Hilary Scheinuk/The Advocate.
Lead engineer Daniel Norman works through a virtual reality program at the Level Up Lab, a virtual reality business incubator in the Louisiana Technology Park. King Crow Studios, 3D Media, and Pixel Dash, have been selected by ExxonMobil to codevelop virtual reality training for the company.

Baton Rouge-based digital media company King Crow Studios was developing video games for years. Then, an introduction to decision-makers at ExxonMobil gave it the opportunity to codevelop virtual reality training for the company.

ExxonMobil is expanding its Baton Rouge polyolefins plant in a $500 million investment and tapped King Crow Studios, along with 3D Media and Pixel Dash, for the training effort—a sign of an emerging collaboration in Louisiana between tech-driven startups and the industrial sector.

“When you can get an executive into the virtual reality headset, they can see the entire perspective of what is possible,” said Cody Louviere, founder of King Crow Studios. “We’re all seeing new opportunities because these big companies help with the visibility.”

The startups will enable ExxonMobil to simulate emergency situations, among other scenarios, to put employees through the muscle memory of tasks inside a plant.

“In critical scenarios, you can see how somebody reacts while there is a fire going on around them, not just visually and measuring the correctness of the responses but whether they have fight or flight,” Louviere said.

Software can be customized to individual manufacturing facilities because they often have proprietary processes and unique designs, he said.

Louviere said he’s already fielding interest from two other major companies for similar training software and was awarded a Small Business Innovation Research grant for virtual reality training for the US Air Force this year.

Louisiana has a unique advantage for growing technology companies that cater to the petrochemical industry, and local entrepreneurs see an emerging opportunity to capitalize on that as manufacturing executives consider the next generation of the industry.