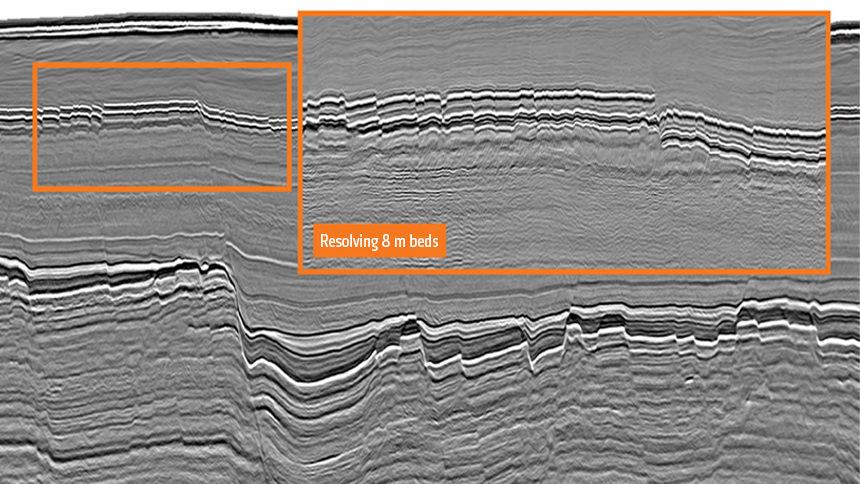 Credit: PGS.
A seismic section extending from the Finnmark platform in the southwest to the Hammerfest Basin showing a tuning thickness reduced to approximately 8 m.

An ultrahigh-density high-resolution data set from the Hammerfest Basin is now available from PGS. PGS said it expects to extended the data set in 2020. Full-integrity data includes open acreage and resolves the challenges in this complex area through a combination of streamer setup and advanced imaging technologies.

The following key features are revealed with this data set, which extends from the Finnmark platform in the southwest into the Hammerfest Basin in the northeast:

Diving Deeper To Resolve the Challenges of the Barents Sea

As shown in Fig. 1, an acquisition configuration that combines novel streamer setup and advanced imaging technologies was designed as the best solution to resolve mixed depth targets in the Barents Sea.

PGS’ planned 2020 survey extension includes open acreage in the Barents Sea, and the overall area accounts for around half of the undiscovered resources on the Norwegian continental shelf, according to the Norwegian Petroleum Directorate.

Key target areas for hydrocarbon plays in the southwestern Barents Sea are the shallow Kapp Toscana Group sandstones, the deeper middle Triassic Kobbe Formation sandstones, and potentially karstified Carboniferous/Permian carbonates. Proven discoveries made in both geological regimes show the great hydrocarbon potential of this area, but a key challenge in producing an accurate image of the subsurface is creating a reliable velocity model that accounts for the area’s complex geological regime.