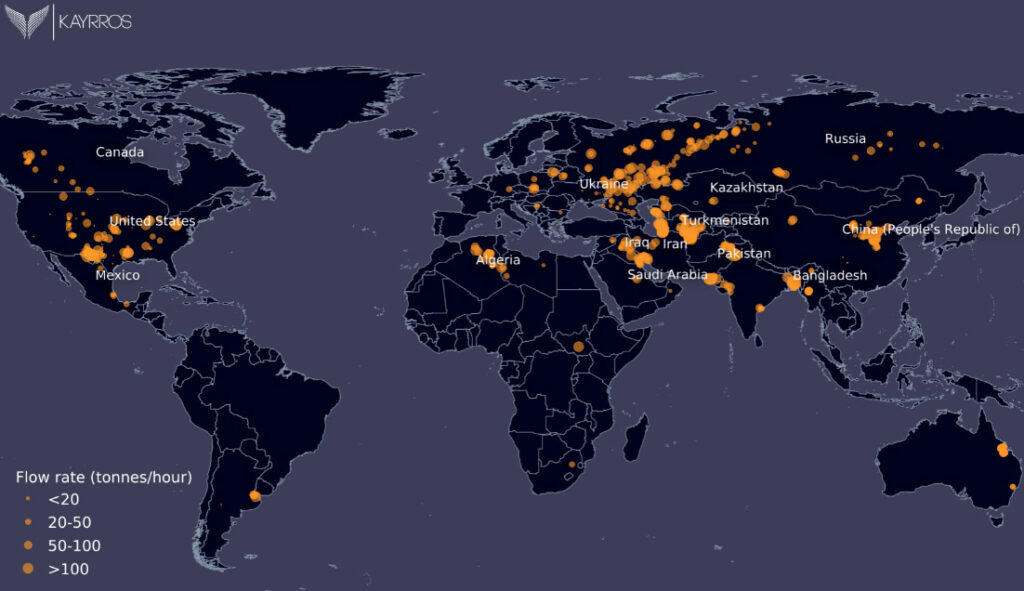 Paris-based data analytics company Kayrros said it has recorded a 32% increase in the overall volume of methane emitted from large leaks around the world, compared to the first 8 months of 2019. In Algeria, Russia, and Turkmenistan, the increase is even higher, totaling more than 40%.

The unexpected increase, which occurred despite a significant decrease in global oil and gas activity, was recorded by the company’s automated Methane Watch emissions-surveillance technology. The technology makes extensive use of the Sentinel-5P satellite operated by the European Space Agency Copernicus program to provide frequent readings of methane concentration across major oil and gas basins with a resolution of 5.5×7 km. Kayrros analyzes these readings to identify large sources of emissions. The current detection threshold is above 5 tons per hour. A methane leak of this volume is equivalent to approximately 3.7 million tons of CO2-equivalent per year of continuous emission. The so-called super-emitters detected in the oil and gas sector using the satellite imagery, which also includes clusters of smaller sources, release an average estimated methane volume of 26,000 tons globally on any given day.

“Such increases in methane emissions are concerning and in stark contradiction to the direction set in the Paris Agreement of 2015,” said Antoine Rostand, president of Kayrros. “Despite much talk of climate action by energy industry stakeholders, global methane emissions continue to increase steeply. In 2019 alone, our technology tracked a combined volume of visible large methane leaks of 10 Mt, equivalent to more than 800 Mt of CO2 over a 20-year period,” Rostand added, that the largest contributors in 2019 were the US, Russia, Algeria, Turkmenistan, Iran, and Iraq.

The latest increase in emissions is thought to reflect the effects of changing operational practices among oil and gas operators in light of the global coronavirus pandemic and adjusted activity surrounding pipelines. The leaks are typically associated with the energy industry and include assets such as mines, oil wells, natural-gas-compression stations and pipelines. They may be driven by operational events such as well completions in shale plays and pipeline-network maintenance. Methane released can be flared or vented, the latter being more cost efficient. Large global methane leaks from the fossil fuels industry in 2019 were equal to the total volume of CO₂ emitted by Germany and France combined, according to Kayrros data.

These latest emissions figures coincided with, and were referenced in. the European Union’s (EU) announcement on 14 October that it will establish a new, Europe-wide methane strategy to integrate policy across energy, agriculture, and waste to improve data, reporting, and global transparency on the source and size of methane emissions. The strategy places focus on reporting pertaining to the energy sector, including on methane emissions outside of EU borders, as a precursor to enforcing action where voluntary measures are deemed insufficient to mitigate the sources contributing to climate change.

Methane emissions are responsible for a high proportion of total greenhouse-gas emissions, having reached approximately 20% in 2019, according to the International Energy Agency. While the agricultural sector is the largest single source of methane emissions worldwide, the energy sector—including oil, natural gas, coal, and bioenergy sources—is second. Although many possible opportunities exist to reduce methane emissions from the energy sector at a low cost, reduction has often been hampered by a lack of reliable data.

Tim Gould, head of the division for energy supply outlooks and investment at the IEA, said at a recent webinar on methane emissions, “Kayrros technology is a huge step forward in transparency. We assumed that these leaks were there, but we’ve never been able to pinpoint where, exactly. I think the crucial thing is that this technology really does move the needle.”