Counseled by Industry, Not Staff, EPA Chief Is Off to a Blazing Start 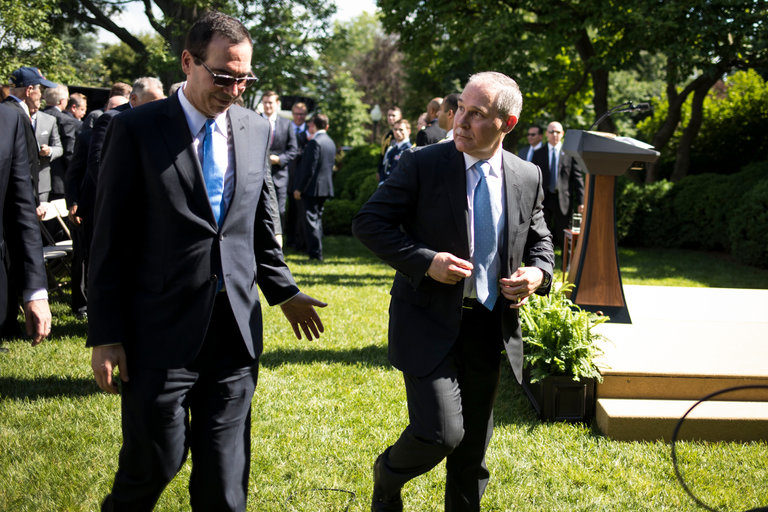 In the 4 months since he took office as the Environmental Protection Agency’s administrator, Scott Pruitt has moved to undo, delay, or otherwise block more than 30 environmental rules, a regulatory rollback larger in scope than any other over so short a time in the agency’s 47-year history, according to experts in environmental law.

Pruitt’s supporters, including President Trump, have hailed his moves as an uprooting of the administrative state and a clearing of onerous regulations that have stymied American business. Environmental advocates have watched in horror as Pruitt has worked to disable the authority of the agency charged with protecting the nation’s air, water, and public health.

But both sides agree: While much of Trump’s policy agenda is mired in legal and legislative delays, hampered by poor execution and overshadowed by the Russia investigations, the EPA is acting. Pruitt, a former Oklahoma attorney general who built a career out of suing the agency he now leads, is moving effectively to dismantle the regulations and international agreements that stood as a cornerstone of President Barack Obama’s legacy.

“Just the number of environmental rollbacks in this time frame is astounding,” said Richard Lazarus, a professor of environmental law at Harvard. “Pruitt has come in with a real mission. He is much more organized, much more focused than the other cabinet-level officials, who have not really taken charge of their agencies. It’s very striking how much they’ve done.”

Since February, Pruitt has filed a proposal of intent to undo or weaken Obama’s climate change regulations, known as the Clean Power Plan. In late June, he filed a legal plan to repeal an Obama-era rule curbing pollution in the nation’s waterways. He delayed a rule that would require fossil fuel companies to rein in leaks of methane, a potent greenhouse gas, from oil and gas wells. He delayed the date by which companies must comply with a rule to prevent explosions and spills at chemical plants. And he reversed a ban on the use of a pesticide that the EPA’s own scientists have said is linked to damage of children’s nervous systems.