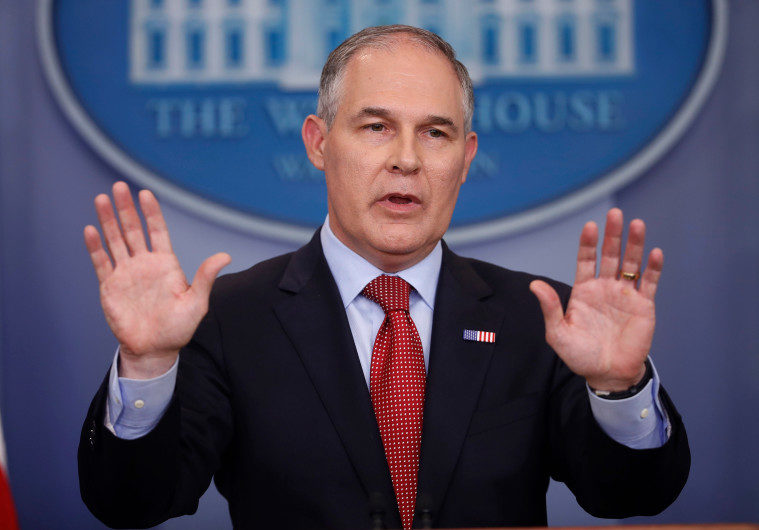 Pablo Martinez Monsivais/Associated Press.
In this 2 June 2017 file photo, EPA Administrator Scott Pruitt speaks to the media during the daily briefing in the Brady Press Briefing Room of the White House in Washington. A federal appeals court in Washington says Pruitt overstepped his authority in trying to delay implementation of a 2016 rule requiring oil and gas companies to monitor and reduce methane leaks.

A federal appeals court in Washington ruled on 3 July that the head of the Environmental Protection Agency (EPA) overstepped his authority in trying to delay implementation of an Obama administration rule requiring oil and gas companies to monitor and reduce methane leaks.

In a split decision, the three-judge panel from the US Court of Appeals for the District of Columbia Circuit ordered the EPA to move forward with the new requirement that aims to reduce planet-warming emissions from oil and gas operations.

EPA Administrator Scott Pruitt announced in April that he would delay by 90 days the deadline for oil and gas companies to follow the new rule so that the agency could reconsider the measure. The American Petroleum Institute, the Texas Oil and Gas Association, and other industry groups had petitioned Pruitt to scrap the requirement, which had been set to take effect in June.

Last month, Pruitt announced he intended to extend the 90-day stay for 2 years. A coalition of six environmental groups opposed the delay in court, urging the appeals judges to block Pruitt’s decision.

In a detailed 31-page ruling, the court disagreed with Pruitt’s contention that industry groups had not had sufficient opportunity to comment before the 2016 rule was enacted. The judges also said Pruitt lacked the legal authority to delay the rule from taking effect.