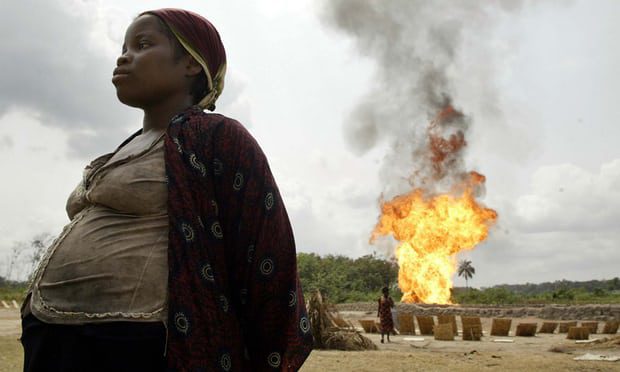 Credit: George Osodi/AP.
A gas flare is seen in the background as a pregnant woman dries tapioca near Utorogu flow station in Warri, southern Nigeria.

Babies in Nigeria are twice as likely to die in the first month of life if their mothers were living near an oil spill before becoming pregnant, researchers have found.

A new study, the first to link environmental pollution with newborn and child mortality rates in the Niger Delta, shows that oil spills occurring within 10 km of a mother’s place of residence doubled neonatal mortality rates and impaired the health of her surviving children.

“The results from the study are absolutely shocking,” said Roland Hodler, an economics professor from the University of St. Gallen in Switzerland, who led the study. “I didn’t expect to see this effect on preconception. Why we don’t find a stronger effect [on the fetus] during the pregnancy is not entirely clear—maybe it is due to the cumulative contamination of crude oil in the water and soil, which increases over time. But that doesn’t explain the entire effect.

“This is a tragedy. Even 4 to 5 years prior to conception, an oil spill still matters. I think this should be seen as a first-world problem for something to be done.”

Regular, uncontrolled spills have been a prominent feature of Nigeria’s oil industry—the nation’s primary source of GDP—since crude was discovered there more than 60 years ago. An estimated 240,000 bbl of crude oil are spilled in the Niger Delta every year, polluting waterways, contaminating crops, and releasing toxic chemicals into the air.

A 2011 report by the UN Environment Programme estimated that, after decades of repeated oil spills in Ogoniland, it would take 30 years to reverse damage to public health and the regional ecosystem.