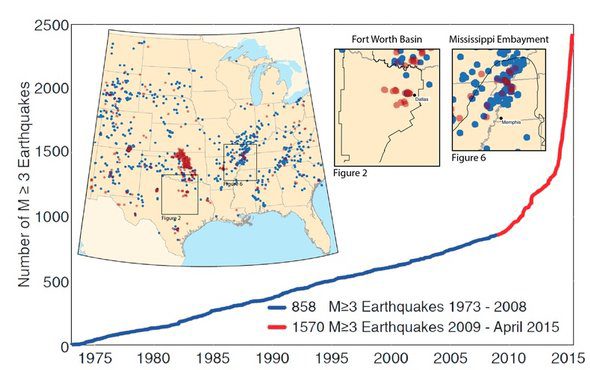 Credit: Magnani et al., Sci. Adv. 2017;3: e1701593
Earthquakes have been common in Texas and Mississippi since 2008. But Texas jolts are on faults that had been silent for millions of years, unlike Mississippi, indicating recent human activity set them loose.

Since 2008, Texas, Oklahoma, Kansas, and a handful of other states have experienced unprecedented surges of earthquakes. Oklahoma’s rate increased from one or two per year to more than 800. Texas has seen a sixfold spike. Most have been small, but Oklahoma has seen several damaging quakes stronger than magnitude 5. While most scientists agree that the surge has been triggered by the injection of wastewater from oil and gas production into deep wells, some have suggested these quakes are natural, arising from faults in the crust that move on their own every so often. Now, researchers have traced 450 million years of fault history in the Dallas/Fort Worth area and learned these faults almost never move.

“There hasn’t been activity along these faults for 300 million years,” said Beatrice Magnani, a seismologist at Southern Methodist University in Dallas and lead author of a paper describing the research, published 24 November in Science Advances. “Geologically, we usually define these faults as dead.”

Magnani and her colleagues argue that these faults would not have produced the recent earthquakes if not for wastewater injection. Pressure from these injections propagates underground and can disturb weak faults. The work is another piece of evidence implicating drilling in the quakes, yet the Texas government has not officially accepted the link to one of its most lucrative industries.

Magnani and her colleagues studied the Texas faults using images of the subsurface similar to ultrasound scans. Known as seismic reflection data, the images are created by equipment that generates sound waves and records the speeds at which the waves bounce off faults and different rock layers deep within the ground. Faults that have produced earthquakes look like vertical cracks in a brick wall, where one side of the wall has sunk down a few inches so the rows of bricks no longer line up. Scientists know the age of each rock layer—each row of bricks—based on previous studies that have used a variety of dating techniques.