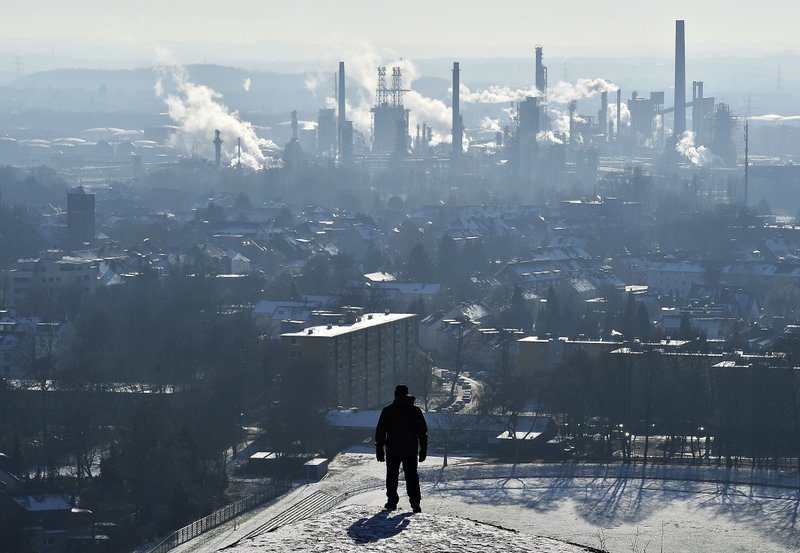 Credit: Martin Meissner/AP.
In this 19 January 2016 file photo, a man watches a BP refinery in Gelsenkirchen, Germany. New York City officials say they will begin the process of dumping about $5 billion in pension fund investments in fossil fuel companies, including BP, because of environmental concerns.

New York City is taking on the oil industry on two fronts, announcing a lawsuit on 10 January that blames the top five oil companies for contributing to global warming and saying the city will sell off billions in fossil fuel investments from the city’s pension funds.

Democratic Mayor Bill de Blasio received immediate blowback from some of the companies, while winning praise from environmentalists and others.

“We’re bringing the fight against climate change straight to the fossil fuel companies that knew about its effects and intentionally misled the public to protect their profits,” the mayor said. “As climate change continues to worsen, it’s up to the fossil fuel companies whose greed put us in this position to shoulder the cost of making New York safer and more resilient.”

The city alleges the fossil fuel industry was aware for decades that burning fuel was affecting climate change.

The defendants in the city’s federal lawsuit are BP, Chevron, ConocoPhillips, Exxon Mobil, and Royal Dutch Shell. Three of the companies shot back against the mayor’s accusations, while two others — ConocoPhillips and BP — declined to enter the fray.

“Reducing greenhouse gas emissions is a global issue and requires global participation and actions,” said Exxon Mobil’s Scott Silvestri. “Lawsuits of this kind — filed by trial attorneys against an industry that provides products we all rely upon to power the economy and enable our domestic life — simply do not do that.”

Also on 10 January, de Blasio and Comptroller Scott Stringer said they intend to divest the city’s five pension funds of roughly $5 billion in fossil fuel investments out of its total of $189 billion. They say the divestment is the largest of any municipality in the US to date.

“Safeguarding the retirement of our city’s police officers, teachers, and firefighters is our top priority, and we believe that their financial future is linked to the sustainability of the planet,” Stringer said.