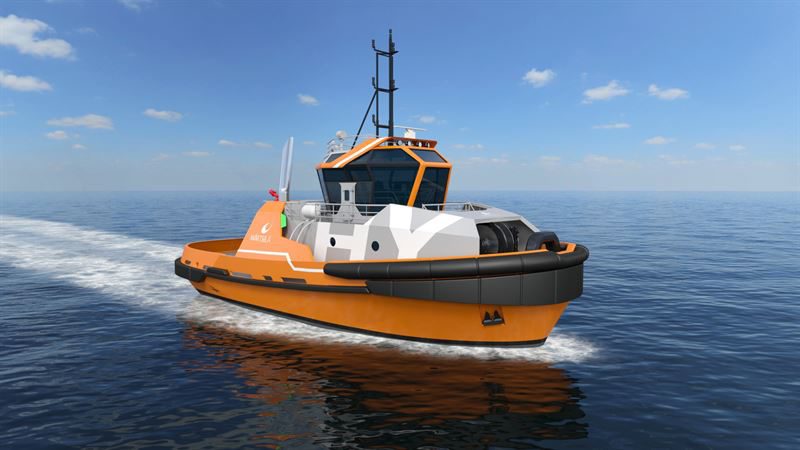 The technology group Wärtsilä has signed a memorandum of understanding with Petrocity, the parent company of a new port facility being built in the Brazilian city of São Mateus, Espírito Santo, to develop a harbour tug design. The prime consideration is to maximize the ecological operational sustainability of the vessel because the environmental demands of the new port are among the most stringent in the world. For this reason, the design will be based on the recently launched Wärtsilä HYTug, which features hybrid propulsion and energy storage using batteries.

The fuel efficiency of the design has the added benefit of reducing exhaust emission levels. Furthermore, when operating in "green" mode, it is unlikely that there will be any visible smoke from the Wärtsilä HYTug because the load is being picked up by the batteries. At the same time, the noise level of the tug will be notably reduced.

“Green port operations are completely aligned with Petrocity’s corporate philosophy and values," said José Roberto, chief executive officer for Petrocity. "We look forward to working with Wärtsilä in developing the kind of harbor tug that meets the criteria that have been established for this project. This will be the first of many others in a huge logistics project which aims at the regional integration of the Espírito Santo, Minas Gerais, and Bahia states. It represents a definitive guarantee of the interiorization of the economy in the north of Espírito Santo.”

The new hybrid vessel features a very distinctive outlook while providing the power and maneuverability for practical tug operations. The overall design has been optimized for low hull resistance, high towing and escort performance, efficient sea-keeping, crew safety and comfort, and easy maintenance.