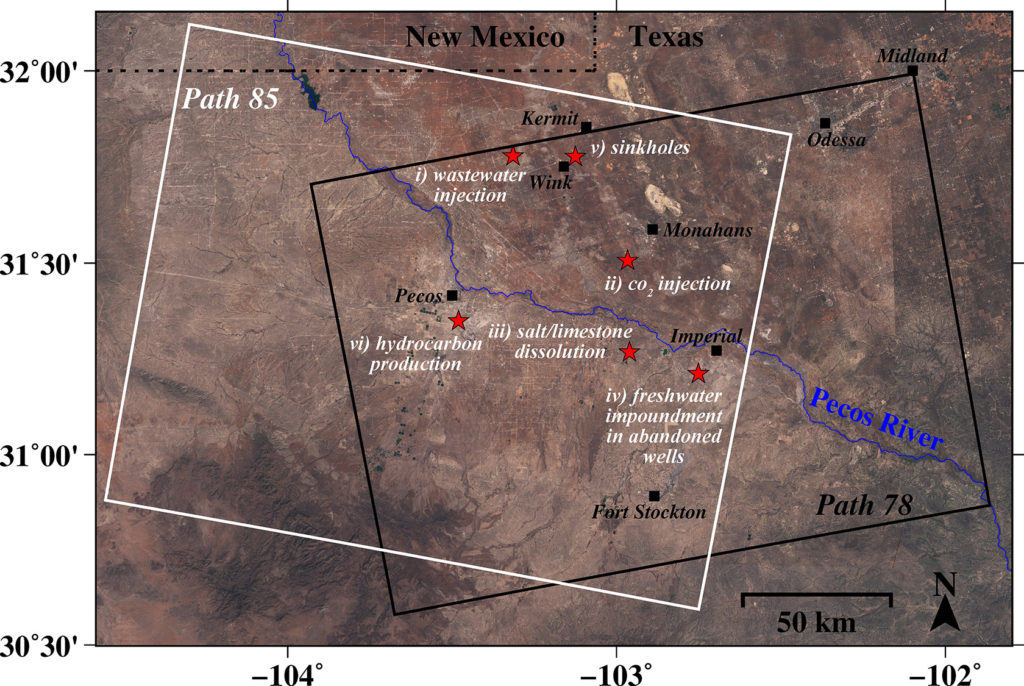 Two giant sinkholes near Wink, Texas, may just be the tip of the iceberg, according to a new study that found alarming rates of new ground movement extending far beyond the infamous sinkholes.

That’s the finding of a geophysical team from Southern Methodist University (SMU) that previously reported the rapid rate at which the sinkholes are expanding and new ones are forming.

Now, the team has discovered that various locations in large portions of four Texas counties are also sinking and uplifting.

Radar satellite images show significant movement of the ground across localities in a 4000-sq-mile area—in one place as much as 40 in. over the past 2.5 years, say the geophysicists.

“The ground movement we’re seeing is not normal. The ground doesn’t typically do this without some cause,” said geophysicist Zhong Lu, a professor in the Roy M. Huffington Department of Earth Sciences at SMU and a global expert in satellite radar imagery analysis.

“These hazards represent a danger to residents, roads, railroads, levees, dams, and oil and gas pipelines, as well as potential pollution of ground water,” Lu said. “Proactive, continuous detailed monitoring from space is critical to secure the safety of people and property.”

The scientists made the discovery with analysis of medium-resolution (15 to 65 ft) radar imagery taken between November 2014 and April 2017. The images cover portions of four oil-patch counties where there’s heavy production of hydrocarbons from the oil-rich West Texas Permian Basin.

The imagery, coupled with oil-well production data from the Railroad Commission of Texas, suggests the area’s unstable ground is associated with decades of oil activity and its effect on rocks below the surface of the earth.

The SMU researchers caution that ground movement may extend beyond what radar observed in the four-county area. The entire region is highly vulnerable to human activity because of its geology—water-soluble salt and limestone formations and shale formations.

“We’re fairly certain that, when we look further, and we are, that we’ll find there’s ground movement even beyond that,” Kim said. “This region of Texas has been punctured like a pin cushion with oil wells and injection wells since the 1940s, and our findings associate that activity with ground movement.”

Lu, Shuler-Foscue Chair at SMU, and Kim reported their findings in the Nature publication Scientific Reports, in the article “Association Between Localized Geohazards in West Texas and Human Activities, Recognized by Sentinel-1A/B Satellite Radar Imagery.”

The researchers analyzed satellite radar images that were made public by the European Space Agency and supplemented that with oil activity data from the Railroad Commission of Texas.

The study is among the first of its kind to identify small-scale deformation signals over a vast region by drawing from big data sets spanning a number of years and then adding supplementary information.

The research is supported by the NASA Earth Surface and Interior Program and the Shuler-Foscue Endowment at SMU.

The images from the European Space Agency are the result of satellite radar interferometry from recently launched open-source orbiting satellites that make radar images freely available to the public.

With interferometric synthetic aperture radar, or InSAR, the satellites allow scientists to detect changes that aren’t visible to the naked eye and that might otherwise go undetected.

The satellite technology can capture ground deformation with an accuracy of sub-inches or better at a spatial resolution of a few yards or better over thousands of miles, say the researchers.

Injected fluids increase the pore pressure in the rocks, and the release of the stress is followed by ground uplift. The researchers found that ground movement coincided with nearby sequences of wastewater injection rates and volume and CO2 injection in nearby wells.

Also related to the ground’s sinking and upheaval are dissolving salt formations because of freshwater leaking into abandoned underground oil facilities, as well as the extraction of oil.

Sinking and Uplift Detected From Wink to Fort Stockton
As might be expected, the most significant subsidence is about a half-mile east of the huge Wink No. 2 sinkhole, where there are two subsidence bowls, one of which has sunk more than 15.5 in. a year. The rapid sinking is most likely caused by water leaking through abandoned wells into the Salado formation and dissolving salt layers, threatening possible ground collapse.

At two wastewater injection wells 9.3 miles west of Wink and Kermit, the radar detected upheaval of about 2.1 in. that coincided with increases in injection volume. The injection wells extend about 4,921 to 5,577 ft deep into a sandstone formation.

In the vicinity of 11 CO2 injection wells nearly 7 miles southwest of Monahans, the radar analysis detected surface uplift of more than 1 in. The wells are approximately 2,460 to 2,657 ft deep. As with wastewater injection, CO2 injection increased pore pressure in the rocks, so, when stress was relieved, it was followed by uplift of about 1 in. at the surface.

The researchers also looked at an area 4.3 miles southwest of Imperial, where significant subsidence from fresh water flowing through cracked well casings, corroded steel pipes, and unplugged abandoned wells has been widely reported.

Water there has leaked into the easily dissolved Salado formation, created voids, and caused the ground to sink and water to rise from the subsurface, including creating Boehmer Lake, which didn’t exist before 2003.

Radar analysis by the SMU team detected rapid subsidence ranging from three-fourths of an inch to nearly 4 in. around active wells, abandoned wells, and orphaned wells.

“Movements around the roads and oil facilities to the southwest of Imperial, Texas, should be thoroughly monitored to mitigate potential catastrophes,” the researchers write in the study.

About 5.5 miles south of Pecos, their radar analysis detected more than 1 in. of subsidence near new wells in production since early 2015. There have also been six small earthquakes recorded there in recent years, suggesting the deformation of the ground generated accumulated stress and caused existing faults to slip.

“We have seen a surge of seismic activity around Pecos in the last 5 to 6 years. Before 2012, earthquakes had not been recorded there. At the same time, our results clearly indicate that ground deformation near Pecos is occurring,” Kim said. “Although earthquakes and surface subsidence could be coincidence, we cannot exclude the possibility that these earthquakes were induced by hydrocarbon production activities.”