Perspectives on the Great Amazon Reef: Extension, Biodiversity, and Threats 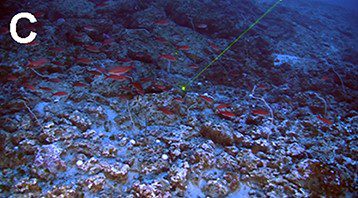 Diverse reef community with schools of Paranthias furcifer and bottom dominated by live crustose calcareous algae and black corals at 130 m depth show the geodiversity and biodiversity of the GARS.

This paper provides a broad overview of the Great Amazon Reef System (GARS) based on the first-ever video surveys of the region. This footage supports four major hypotheses:

The paper also call attention to the urgent need to adopt precautionary conservation measures to protect the region in the face of increasing threats from extractive oil and gas practices. With less than 5% of the potential area of the GARS surveyed so far, more research will be required to inform a systematic conservation planning approach and determine how best to establish a network of marine protected areas. Such planning will be required to reconcile extractive activities with effective biodiversity conservation in the GARS.