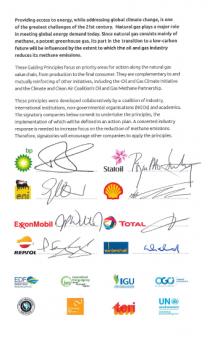 Three global associations— the International Gas Union (IGU), IPIECA, and the International Association of Oil and Gas Producers (IOGP)—have become associate signatories to the Methane Guiding Principles. While they do not have a mandate to enjoin their members, as associate signatories, they will play an important role in encouraging the application of the principles.

This commitment forms part of wider efforts by the global energy industry to ensure that natural gas continues to play a critical role in helping meet future energy demand while tackling climate change and improving air quality. Because natural gas consists mainly of methane, a potent greenhouse gas, its role in the transition to a low-carbon future will be influenced by the extent to which methane emissions are reduced.

“Numerous scientific studies have shown how important it is to quickly reduce methane emissions so we can meet growing demand for natural gas while achieving climate change and clean air goals,” said Mark Radka, head of UN Environment’s Energy and Climate Branch. “We’re delighted that the IGU, IPIECA, and the IOGP have become associate signatories to the Methane Guiding Principles. These organizations can help extend the spirit and intent of the principle throughout the natural gas value chain and report on the reductions achieved.”

“The IGU supports urgent and increased efforts toward methane emissions mitigation, and the guiding principles are a significant step toward achieving that goal,” said David Carroll, president of the IGU. “Natural gas remains well positioned to make a significant contribution to improving air quality while also reducing carbon emissions. As the global voice of gas, we continue to support efforts that focus on measuring, documenting, and reducing methane emissions.”

The guiding principles were developed with a coalition of international institutions, nongovernmental organizations, and academics, including the Environmental Defense Fund, the International Energy Agency, the Oil and Gas Climate Initiative Climate Investments, the Rocky Mountain Institute, the Sustainable Gas Institute, The Energy and Resources Institute, and United Nations Environment.

The IGU was founded in 1931 and is a worldwide nonprofit organization aimed at promoting the political, technical, and economic progress of the gas industry. The union has more than 150 members worldwide on all continents, representing approximately 97% of the world gas market. The members of the IGU are national associations and corporations within the gas industry worldwide. The IGU organizes the World Gas Conference every 3 years, with the next conference taking place in Washington, DC, USA, in June 2018. The IGU’s working organization covers all aspects of the gas industry from exploration and production, storage, liquefied natural gas, distribution, and natural gas use in all market segments.

The International Association of Oil and Gas Producers (IOGP) is the voice of the global upstream industry. Oil and gas continue to provide a significant proportion of the world’s energy to meet growing demands for heat, light, and transport. IOGP members produce 40% of the world’s oil and gas. They operate in all producing regions: the Americas, Africa, Europe, the Middle East, the Caspian, Asia, and Australia. IOGP serves industry regulators as a global partner for improving safety, environmental, and social performance. IOGP also acts as an upstream forum in which members identify and share knowledge and good practices to achieve improvements in health, safety, the environment, security, and social responsibility.