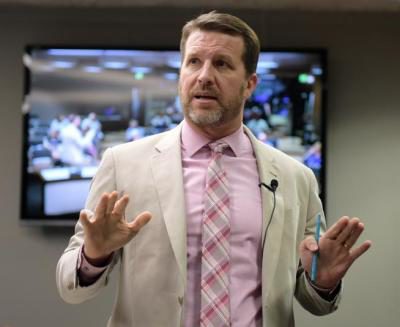 Credit: Lewis Geyer/Longmont Times-Call.
Longmont, Colorado, Mayor Brian Bagley speaks at the start of the Longmont City Council public forum about the city's oil and gas agreement on 15 May.

Longmont's City Council members voted to give final approval to the city's $3 million agreement with TOP Operating and Cub Creek Energy that officials have said will end oil and gas drilling from the surfaces of properties within the city, as well as city-owned properties east of Longmont.

Dissenting from the majority vote was Councilwoman Joan Peck, who said she did not want any hydraulic fracturing to free up oil and gas deposits deep underneath Union Reservoir—even if that and the drilling to follow is done directionally and horizontally from private properties away from the reservoir.

Peck said she thought that allowing fracturing underneath the reservoir "is criminal."

Her six council colleagues, however, defended the agreement as the best the city could do, given the constraints of state laws and a 2016 Colorado Supreme Court decision that overturned Longmont's voter-approved ban on hydraulic fracturing.

Councilman Tim Waters said the agreement is "not the perfect solution" to possibly dangerous effects of oil and gas exploration and production.

However, "I'm not going to pass on the chance to win one for Longmont" by voting to increase the health and safety of the city's residents as much as currently possible, he said.

"The city needs to do what the city can do," said Councilwoman Marcia Martin, adding that "we are dealing with an issue"—oil and gas companies' legal ability to proceed with activities and even to require Longmont to include oil and gas for which the city holds mineral rights, under the forced-pooling process—"that the city does not have the power to stop."

She added, "I'm going to vote for this, even though I would give my right arm to stop fracking under Union Reservoir."

Councilman Aren Rodriguez said Longmont should continue pushing to keep hydraulic fracturing from the surface as far away as possible from the city, but the council cannot collectively engage in "civil disobedience" by refusing to comply with state laws and court precedents.

"We are over a barrel," said Councilwoman Polly Christensen, but she joined Rodriguez in saying the city hasn't given up its fight for stronger local controls over and protections from the effects of oil and gas operations.

Bagley said, "I'm not ready to claim victory yet" in the city's efforts to reduce or eliminate the potential health, safety, and environmental effects of oil and gas exploration and production, "but, nevertheless, this is a big step."

The first well closure would be required to take place within 120 days of the agreement.