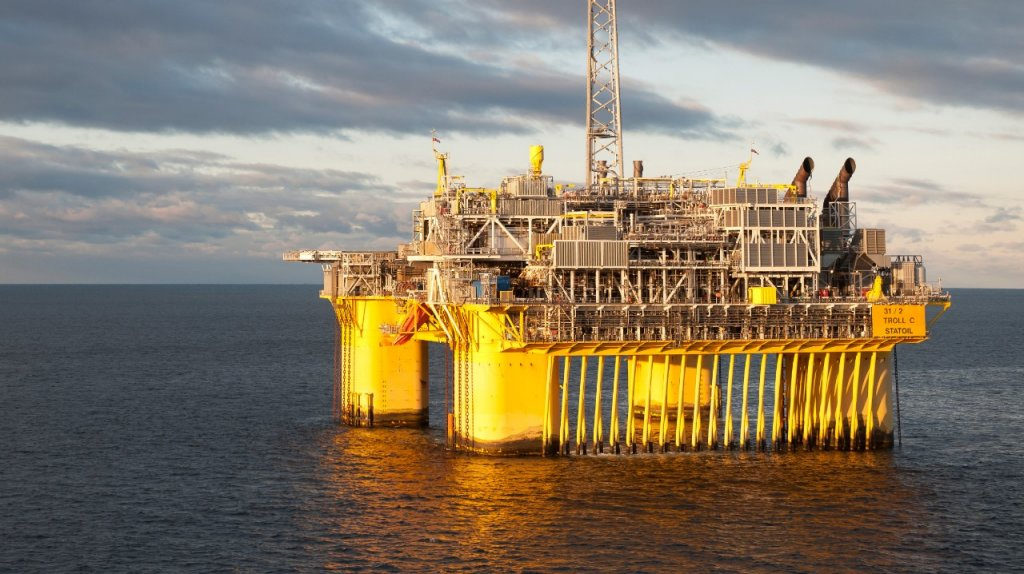 Source: Øyvind Hagen/Equinor.
Equinor is considering using electrical power from land-based sources instead of gas turbines on several of its North Sea platforms, including Troll C. The move could help the company see significant reduction in its carbon dioxide emissions.

Equinor is looking at the possibility of supplying power from land to select offshore facilities in the Norwegian continental shelf (NCS) that are currently being powered by gas turbines. The transition may cut carbon dioxide (CO2) emissions by more than 600,000 tonnes/year if implemented.

Troll C and the Sleipner field center, which includes the Gudrun tie-in platform, are the facilities being considered. All three platforms are in field areas that already receive power from land. The Troll A gas platform has been powered from land since it came on stream in 1996 and has been operating with minimal production emissions. Equinor said its goal is to find a solution for tying Troll C to the same power solution as Troll A via a power cable from the Kollsnes plant near Bergen.

The Johan Sverdrup field, scheduled for first oil in late 2019, will also be powered from land along with several fields on the Utsira High including the Gina Krog field, which came on stream last year. Equinor is pursuing options for extending the power supply from Gina Krog, with the goal of connecting the Sleipner field center and the Gundrun platform to a land-based power supply.

These efforts are part of Equinor’s plan to reduce its carbon footprint. It aims to reduce CO2 emissions from its offshore operations by 2 million tonnes annually in the next 12 years.

“The electrification plans for Troll C and the Sleipner area give us an opportunity to mature further substantial reductions through good collaboration in the licenses, with authorities, and the industry at large,” Arne Sigye Nylund, Equinor’s executive vice president for the NCS, said in a statement.

Equinor estimates that it could reduce its CO2 emissions by 350,000 tonnes/year by platform electrification on Troll C. Sleipner has the potential for a 250,000-tonne/year emission reduction. Electrification may also lead to an annual reduction of NOX emissions by approximately 2,500 tonnes. On top of that, the company could see 1.3 million tonnes of CO2 savings by choosing land-based power supply to Johan Sverrdup, Gina Krog, and Martin Linge, which it said was equivalent to 650,000 cars on the road.

The electrification plan follows a mapping study that Equinor made of the NCS fields it operates. That mapping identified that Troll C and the Sleipner field center, including the Gudrun platform, were most suitable for further consideration.

“Powering major offshore oil and gas installations from land is no easy task,” Nylund said. “There are many challenges, both technical and financial, and several of our installations are in areas with no possibility for tying in to land-based power supply.”