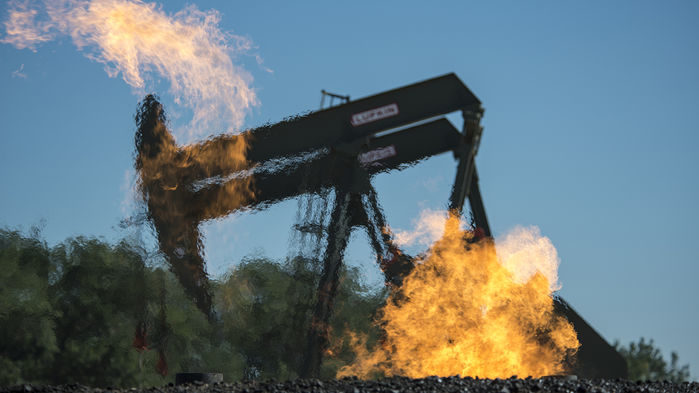 Credit: William Campbell/Corbis via Getty Images.
A shale oil producer in North Dakota burns off natural gas in flares to prevent methane from escaping into the atmosphere.

Natural gas, long promoted as a “clean” alternative to other fossil fuels, may not be so clean after all. That’s because its main ingredient, the potent greenhouse gas methane, has been leaking from oil and gas facilities at far higher rates than governmental regulators claim. A new study finds that, in the United States, such leaks have nearly doubled the climate impact of natural gas, causing warming on par with carbon dioxide (CO2)-emitting coal plants for 2 decades. (Methane doesn’t persist in the atmosphere as long as CO2 does, but, while it does, its warming effect is much stronger.)

The study underscores how the benefits of natural gas, which emits less CO2 than coal when burned, are being undermined by the leaks, says Steve Hamburg, a main author of the study and the chief scientist for the Environmental Defense Fund (EDF), a New York City–based environmental group.

“You’re taking a hit, and it’s an unnecessary hit,” he said. The analysis also suggests the US Environmental Protection Agency (EPA) is presenting too rosy of a picture of natural gas emissions, understating industry methane leaks by approximately 60%.

Some estimates—including those of the EPA—are based on assumed leakage rates for natural gas drilling processes and piping and storage equipment that are drawn from the scientific literature. Although that approach might be accurate if everything worked as expected, the new study shows that it doesn’t, Hamburg says.

He and his EDF colleagues enlisted two dozen government, university, and nonprofit scientists to set out—sometimes on foot—to pin down the numbers. They measured methane levels in the air around natural gas wells, storage tanks, refineries, and underground pipes feeding gas to people’s homes in key gas-producing regions in states including Pennsylvania, Texas, Colorado, Utah, North Dakota, and Arkansas.

They found that, in 2015, methane leaks represented 2.3% of total gas production nationwide, compared with EPA estimates of 1.4%, they report in Science. The higher estimates stem from a small number of so-called superemitters, Hamburg says. Using infrared cameras, an airplane survey of 8,000 industry sites found that 4% had unusually high methane emissions, most tied to hatches and vents in natural gas storage tanks at extraction wells. Thought to be caused by malfunctions, the leaks are rare enough that they are easily missed in most surveys, Hamburg says. “We have so much more data than the EPA does at this point, this is just not comparable.”

Provided with an advance copy of the study, an EPA spokesperson in Washington, DC, Robert Daguillard, said the agency was looking forward to reviewing the study but did not respond to a request to speak with EPA scientists.

The study comprehensively confirms earlier findings that methane leaks are underestimated, says Rob Jackson, an environmental scientist at Stanford University in Palo Alto, California, who has studied methane releases in Boston and Washington, DC. He says the new study probably still understates leakage because it didn’t look as closely at emissions where the gas is consumed, compared to where it is produced. “The closer we look, the more often we find emissions being higher,” he said.