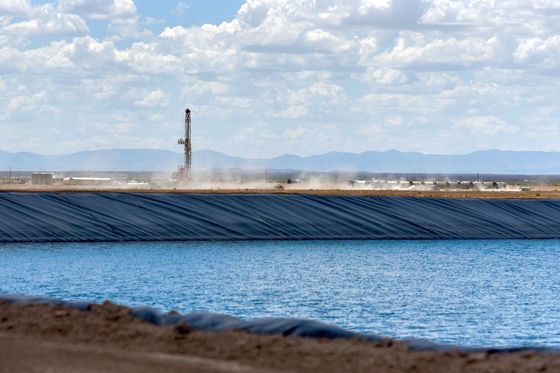 In the dry, dusty plains of West Texas, home to America’s most prolific oil play, the problem isn’t too little water, it’s too much of it.

Standing on a 26-ft-high rig platform in Texas’ Reeves County, Hickey watches as contractors maneuver drilling pipe almost 10,000 ft underground in search of oil. Just half a mile away, another rig is equally hard at work. But this one, operated by WaterBridge Resources, isn’t seeking oil. It’s making a hole to dispose of the vast amount of water generated from local wells.

‘‘If we don’t have a water solution, we can’t produce the well. It’s as simple as that,’’ Hickey said in an interview. “It used to be that each operator handled water themselves. But the sheer volume of what’s now being produced has created an opportunity for specialized water companies to step in.”

With hydraulic fracturing, explorers blast water, sand, and chemicals down wells to crack open the oil-bearing shale below. As oil is pumped up, so is the water, combined with salt-laden water from underground reservoirs to create a toxic mix that would devastate farmland if released on the surface. With as many as 4 bbl of water produced for every barrel of oil, it’s a disposal nightmare that could add as much as $6/bbl to company break-evens by 2025, according to a recent Wood Mackenzie study.

Disposal Nightmare
Overall, the region will pull up enough water this year alone to cover all of Rhode Island nearly a foot deep. Wall Street is well aware of the threats posed by the Permian Basin’s pipeline and labor shortages, key side effects from the region’s rapid buildup. But investors “aren’t as well apprised of some of the other risks and challenges that could be just as material, if not more so,” said Gabriel Collins, a fellow in energy and the environment at Rice University.

“I’d put water right at the top of that list," he said.

How material? Spending on water management in the Permian Basin is likely to nearly double to more than $22 billion in just 5 years, according to industry consultant IHS Markit. The reason is twofold. The rig count is rising, and many of the workhorse disposal formations used for decades are starting to fill up, said Laura Capper, an industry consultant. That means explorers have to move water further to find a home for it.

It’s a problem "that’s just going to get bigger and bigger," said Wood Mackenzie analyst Ryan Duman. "Operators are victims of their own success."