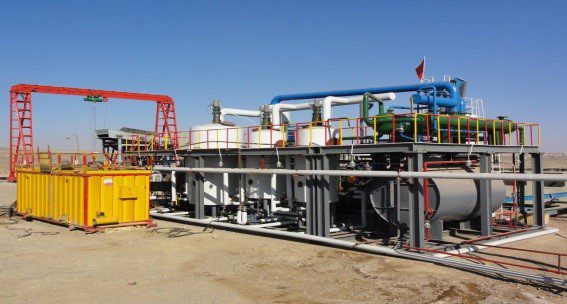 A recycling system for oil-based mud was used to avoid environmental pollution.

The Keshen gas field is in the Tarim basin of western China. The surface is mountainous, the environment is tough, and the ecosystem is fragile. Through 7 years of development, the field has seen natural-gas productivity of 5×109 m3/a by drilling 45 ultradeep high-pressure/high-temperature (HP/HT) wells and building a 140-km-long pipeline system with no environment pollution. Forty-one towns and 4 million residents benefited from this project.

The location of the processing plant and the pipeline network were selected through node analysis and topology analysis. A fishbone-like pipeline system was selected to avoid the mountainous area and minimize disturbance to the local environment. A high-pressure throttling refrigeration technique and a high-efficiency gas-separation technique were used, reducing the energy consumption of processing by 45%. Electricity instead of diesel was used to power drilling, which reduced CO2 emission by 220,000 tons. Processing and recycling of oil-based drilling fluids and flowback fracturing fluids also were conducted to avoid environmental pollution.

By July 2015, the Keshen gas field was established with a natural-gas productivity of 5×109 m3/a. No pollution to the environment and no harm to the ecosystem occurred. No personal injuries were encountered during 27 million man-hours. A 108-km-long road in the mountainous area was built for the gas field and shared by the residents. A gas-supply project was established with cooperation from the local government, changing the local fuel type from firewood to clean natural gas, which reduced the annual emission of SO2, NO2, and CO2 by 790, 660.27, and 61,500 tons, respectively. More than 2,000 jobs in the gas field were created for the residents. In total, 41 towns with 4 million residents benefited from this project. The gross domestic product of Baicheng city was doubled with influence from this project. In addition to satisfying local demand, the natural gas produced from the Keshen gas field is also transported to eastern coastal cities such as Shanghai and Nanjing.

The Keshen gas reservoir is an ultradeep HP/HT reservoir with a depth from 6500 to 8000 m, a temperature from 150 to 182℃, and pressure from 116 to 136 MPa. With the use of many advanced technologies, the reservoir was developed efficiently with no injuries and no pollution to the environment. It also significantly boosted local community development. The development of this field provides a good reference for the development of unconventional reservoirs around the world.

Find the paper on the HSE Technical Discipline Page free for a limited time.