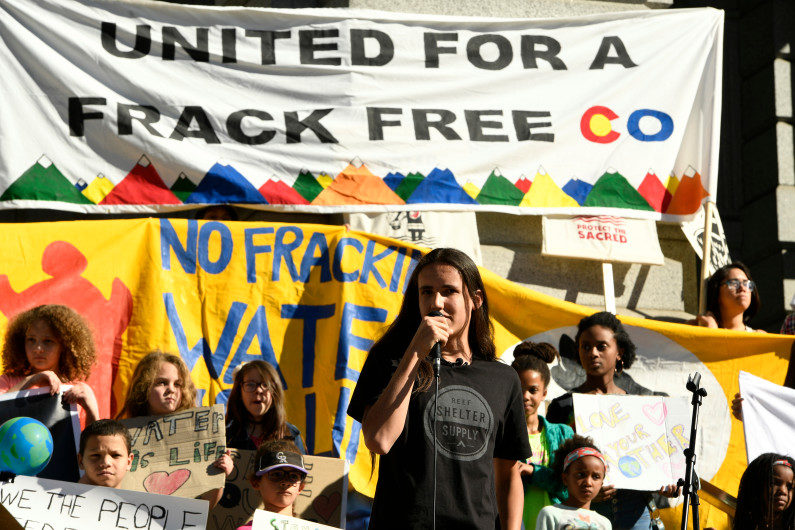 Credit: Helen H. Richardson/The Denver Post.
Xiuhtezcatl Martinez, a hip-hop artist and youth plaintiff, leads a youth rally on the west steps of the Colorado Capitol Building on 20 February 2017 in Denver. Hundreds gathered and marched to rally support for the upcoming court hearing on hydraulic fracturing and climate change. Six youth, including Xiutezcatl Martinez, and attorneys from Our Children’s Trust, filed a lawsuit against the Colorado Oil and Gas Conservation Commission against hydraulic fracturing and recognizing climate change as well as to protect constitutional rights to a stable climate system. They claim the commission is abusing its power by permitting the fossil fuel industry to extract further oil and gas before protecting the health and future of it’s citizens. Martinez is a climate-change activist, hip-hop artist, and leader of Earth Guardians, a worldwide conservation organization.

Colorado communities and pro-oil and gas industry groups are clashing in a Colorado Supreme Court case that could change the way the state handles decisions on allowing increased fossil-fuel production near people.

City and county attorneys urged Colorado Supreme Court justices on 16 October to uphold a court ruling that requires the Colorado Oil and Gas Conservation Commission (COGCC) to ensure protection of the environment and people as a precondition that must be met before issuing permits for more oil and gas drilling.

Industry attorneys, with the backing of Colorado Attorney General Cynthia Coffman, favor a balancing of interests—a balancing that increasingly has been contested as expanding oil and gas development collides with a growing Front Range population and house-building boom.

No decision is expected for months.

For years, the COGCC interpreted its statutory orders from state lawmakers as the balancing of industry interests with protection of public health and the environment.

But in March 2017, the Colorado Court of Appeals ruled in the so-called Martinez case brought by teenagers that public health and the environment must be priorities—with protection guaranteed before allowing industry projects.

Resolving this issue is considered crucial for Colorado towns and cities as well as the industry, which has established more than 54,000 wells in the state and plans many more depending on the price of oil and the costs of extracting fossil fuels in Colorado compared with other parts of the country.