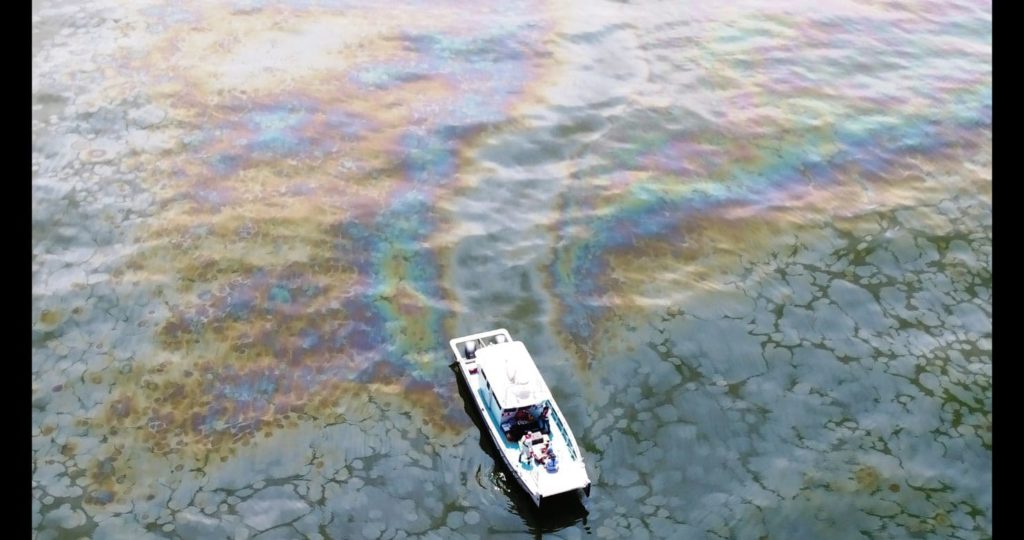 Credit: Oscar Garcia-Pineda/The Washington Post
An aerial image of an oil slick in the Gulf of Mexico, taken on 28 April 2018.

An oil spill that has been quietly leaking millions of barrels into the Gulf of Mexico has gone unplugged for so long that it now verges on becoming one of the worst offshore disasters in US history.

Between 300 and 700 BOPD have been spewing from a site 12 miles off the Louisiana coast since 2004, when an oil-production platform owned by Taylor Energy sank in a mudslide triggered by Hurricane Ivan. Many of the wells have not been capped, and federal officials estimate that the spill could continue through this century. With no fix in sight, the Taylor offshore spill is threatening to overtake BP’s Deepwater Horizon disaster as the largest ever.

As oil continues to spoil the Gulf, the Trump administration is proposing the largest expansion of leases for the oil and gas industry, with the potential to open nearly the entire outer continental shelf to offshore drilling. That includes the Atlantic coast, where drilling hasn’t happened in more than a half century and where hurricanes hit with double the regularity of the Gulf.

Expansion plans come despite fears that the offshore oil industry is poorly regulated and that the planet needs to decrease fossil fuels to combat climate change, as well as the knowledge that 14 years after Ivan took down Taylor’s platform, the broken wells are releasing so much oil that researchers needed respirators to study the damage.

“I don’t think people know that we have this ocean in the United States that’s filled with industry,” said Scott Eustis, an ecologist for the Gulf Restoration Network, as a six-seat plane circled the spill site on a flyover last summer. On the horizon, a forest of oil platforms rose up from the Gulf’s waters, and all that is left of the doomed Taylor platform are rainbow-colored oil slicks that are often visible for miles. He cannot imagine similar development in the Atlantic, where the majority of coastal state governors, lawmakers, attorneys general, and residents have aligned against the administration’s proposal.

The Taylor Energy spill is largely unknown outside Louisiana because of the company’s effort to keep it secret in the hopes of protecting its reputation and proprietary information about its operations, according to a lawsuit that eventually forced the company to reveal its cleanup plan. The spill was hidden for 6 years before environmental watchdog groups stumbled on oil slicks while monitoring the BP Deepwater Horizon disaster a few miles north of the Taylor site in 2010.

The Interior Department is fighting an effort by Taylor Energy to walk away from the disaster. The company sued Interior in federal court, seeking the return of about $450 million left in a trust it established with the government to fund its work to recover part of the wreckage and locate wells buried under 100 ft of muck.