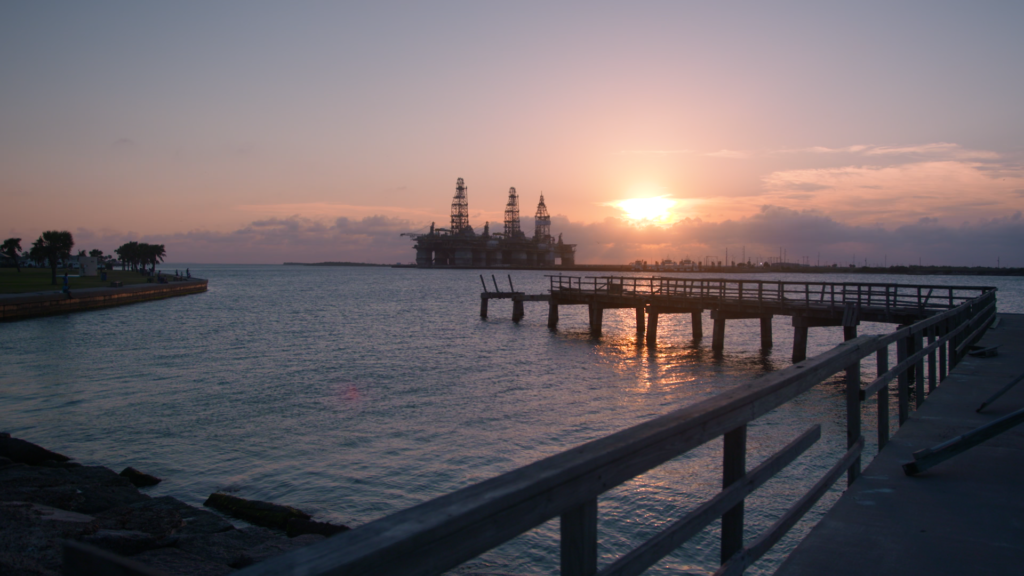 The sun sets on a fishing pier, damaged by Hurricane Harvey in 2017, in Port Aransas, Texas. Three offshore oil rigs stand at attention in the distance.

To the east of Port Aransas, Texas, the Gulf of Mexico stretches out, blue-green and sparkling. To the west and north, flounder and trout meander in a chain of bays. People flock here to fish. Others come to this beach town near Corpus Christi to kayak, parasail or admire the hundreds of bird species on the barrier island, which is deep into rebuilding efforts after Hurricane Harvey damaged or destroyed 85% of the buildings here last year.

A perfect location, from a certain point of view, to put not one but two crude-oil export terminals for ships so big they’re called supertankers.

Those proposals are part of a historic buildout of oil and gas infrastructure in the United States as it becomes a top exporter of both fuels. Texas, home to the most prolific oilfield in the country, is at the epicenter of the frenzy. More than 80 plants, terminals, and other projects are in the works or planned up and down the state’s Gulf Coast, from Port Arthur to Brownsville, according to a Center for Public Integrity and Texas Tribune review of corporate plans. Companies have been laying enough pipeline in Texas in the last several years to stretch from the Atlantic to the Pacific three times over, more than 8,000 miles in all.

Oil and gas production in the US has skyrocketed, particularly in the Permian Basin, most of which underlies West Texas. Producers there are using new drilling technologies to meet—some would say prolong—the global demand for fossil fuels. When Congress lifted decades-old federal restrictions on crude exports at the end of 2015, a move that came on the heels of rule changes throwing open the doors for exports of natural gas, it set off a mad dash. Companies want to get oil and gas from West Texas to the Gulf Coast and, from there, abroad.

Much of the infrastructure is headed for just two regions: Houston—America’s oil capital—and Corpus Christi, where a port previously focused on oil imports is battling it out with Houston to be the country’s No. 1 location for moving crude to other nations. Each shipped out more than $7 billion in crude during the first 9 months of the year, up from less than $1 billion 2 years earlier, according to US Census Bureau figures. Terminals once used to bring oil in are pushing it the other direction.

“At the end of 2015 ... we had the first shipment of crude that was exported,” said John LaRue, executive director of the Port of Corpus Christi. “And now, as I’m sure you know, it’s a constant surge.”

Oil and gas export growth means jobs paying good wages. In Corpus Christi, it’s responsible for roughly 800 new positions so far with another 1,600 expected in the next 4 years, plus several thousand temporary jobs constructing all those facilities, according to an analysis by Texas A&M University-Corpus Christi’s Jim Lee.

But it also intensifies a tragic quandary bedeviling the Gulf. Heavy industry there pumps out greenhouse gases warming the climate, upping the risks of powerful storms that, in turn, endanger those same facilities and everything around them. Harvey, which dumped more rain than any other US storm on record, damaged hundreds of thousands of homes in Texas last year, killed at least 68 people and, particularly around Houston, sparked industrial spills, air pollution, and explosions.

Many of the proposed, under-construction or recently built facilities along the Texas Gulf are in areas that felt Harvey’s bite. Just in the Corpus Christi region, those projects include about nine new or expanding crude oil terminals, a liquefied natural gas terminal, two refined petroleum products terminals, and several plants for processing a component of natural gas into a building block of plastic products. Two of those plants, each approved for tens of millions of dollars in tax breaks, are expected to be among the largest of their kind in the world. And roughly seven pipelines are planned or under way to move more oil and gas here from western and southern Texas.

The Corpus Christi liquefied natural gas terminal—which just began operations and already has expansions planned—received permits to release up to 5.8 million tons of greenhouse gases each year, according to an analysis by the Environmental Integrity Project, a research and advocacy group. That’s the equivalent of nearly 1½ coal-fired power plants. Other parts of this new supply chain, which extends into the Louisiana side of the Gulf, will facilitate greenhouse gases pumped out in Asia, Europe, and beyond.

“There is some irony or poetic justice, depending on your point of view, in having all these greenhouse-gas emitters being the most vulnerable to climate change, but there are a lot of people living around them, and it’s not such a good deal for them,” said Eric Schaeffer, executive director of the Environmental Integrity Project and a former head of civil enforcement at the US Environmental Protection Agency.

The boom also sets up a clash over the future of the mid-Gulf, a less industrial and more tourism-focused part of the Texas coast than Houston.

From the Port of Corpus Christi’s perspective, the new export business is a huge plus. “You’re going to see more development, more industry, more jobs,” said Eddie Martinez, the port’s business development representative, as he cruised in a boat along the ship channel in June, passing oil tankers and new projects.

But, as the growth spills beyond the port’s industrial spine, it’s upending some communities.

The idea of building crude-oil terminals in Port Aransas to serve ships extending the length of four football fields—requiring a much deeper ship channel in that area—has residents and business owners there up in arms.

“Everyone I speak to says they’re against this,” said Neesy Tompkins, who moved to town in 1978 after falling in love with its natural beauty.

“What they’re proposing is an environmental disaster,” said John Donovan, who lives part-time in town and helped form a new group, the Port Aransas Conservancy, that is pressing back on the oil-terminal plans.

This type of development boom on the coast isn’t unprecedented, but it hasn’t happened for decades, said Michael Webber, acting director of the Energy Institute at the University of Texas at Austin. World War II kicked off a building spree that extended into the 1950s, he said. This time around, soaring production is the trigger. In the Permian Basin, companies are extracting double the amount of crude oil and natural gas they did 4 years ago.